National Poetry Month—Edwin Markham "The Man With the Hoe" 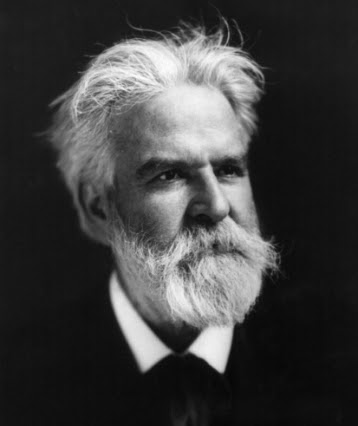 Regular readers of his blog, Heretic, Rebel, a Thing to Flout, may recall that it gets its name from a short four line poem named Outwitted by Edwin Markham:
He drew a circle that shut me out-
Heretic, rebel, a thing to flout.
But love and I had the wit to win:
We drew a circle and took him in!
From the publication of his poem The Man With the Hoe inspired by a painting by Jean-François Millet in 1898 through the early decades of the 20th Century, Markham was one of the most widely read and admired of American poets.  Although more than a generation older, he was often classed with Carl Sandburg and Vachel Lindsey as one of the poets of the people.  But due to shifting styles and tastes he is today an obscure figure.
Charles Edwin Markam was born the youngest of 10 children to a farm family near Oregon City, Oregon in 1853.  His father abandoned the family and his devoutly Christian mother divorced him when Markam was young.  His mother and her younger children relocated to a small ranch in Lagoon Valley, California northwest of San Francisco.  The boy was sporadically educated at rural schools.  He was a gifted and eager student, but his mother vehemently opposed his attempts to get an education both because she feared that “book learning” would lead her son into sin and because she needed him for support.  At the age of 12 his schooling ended and he worked on the family ranch or hired out as a laborer.  It was a hard life which left Markam a champion of the exploited and a skeptic of harsh orthodox Christianity.
Despite his mother’s opposition Markam enrolled in a hard scrabble little college in at Vacaville, California.  He was soon eking out a living as a small town school master.  He earned enough money to enroll in a more established school, Christian College in Santa Rosa, California from which he graduated in 1873.  While there, he discovered Universalism, a denomination where the good news of universal salvation echoed his own emerging outlook.  Upon graduation he was able to secure a better position as a public school teacher in El Dorado County.  He was so well thought of that he was elected Superintendent of Schools six years later.
In 1890 he moved to the big city of Oakland where he became a high school principle.  In his new community, he soon fell in with a semi-bohemian circle of writers and poets that included Joaquin Miller, Donna Coolbrith, Charles Warren Stoddard, and Edmund Clarence Stedman, all important local color writers who encouraged his literary efforts.
He had two failed marriages when he married Anna Catherine Murphy in 1895, a union that endured until her death in 1938.  The same year he abandoned the use of his first name, by which he had been known his entire life, and began using middle name, Edwin.  Three years later he burst into public awareness with his famous poem, The Man With the Hoe.
BMarkham soon found himself in demand on the lecture platform both for reading his poetry and expounding on his socialist and Universalist beliefs.  His talks were often sponsored by labor unions and labor mutual aid organizations.
By the turn of the Century Markham was ready to give up his career as a teacher for the life of a full time literary man.  He relocated his family first to Brooklyn, New York and then to the Staten Island home where he built an extensive personal library and lived until his death.  His first two books The Man with the Hoe and Other Poems in 1899 and Lincoln and Other Poems in 1901 were hugely popular, selling to workers as well as to the usual audience for poetry, a small educated elite.
The second book contained Lincoln, the Man of the People later lauded by critic Henry Van Dyke of Princeton as “the greatest poem ever written on the immortal martyr, and the greatest that ever will be written”—steep praise indeed considering that the competition included two of Walt Whitman’s most famous poems as well as works by Edgar Lee Master, Carl Sandburg, and Vachel Lindsey.  In 1922 Markham was selected to read the poem, which he revised for the occasion, at the dedication of the Lincoln Memorial.
Markham produced several more volumes of poetry, although none were as successful as the first two.  The rise of the Imagists and Modernists eclipsed his reputation in academia.  The fact that his work remained popular with the masses may have hastened the shipwreck of his literary reputation.  By the time he died at the age of 87 in 1940, he had virtually vanished from the cannon of American poetry.
During his ling life Markam wrote on many themes and in different styles.  There were simple maxim-like brief poems like Outwitted which advanced his values of Universalism, democracy, and equality.  There were pastoral and nature poems mostly drawn from his California days.  There were didactic poems like those he wrote to aid the campaign against child labor.  But Markham also gloried in drawing on the classics, which he had studied at Santa Rosa.
But let’s turn to the poem that made him famous.
The Man With the Hoe

Bowed by the weight of centuries he leans
Upon his hoe and gazes on the ground,
The emptiness of ages in his face,
And on his back the burden of the world.
Who made him dead to rapture and despair,
A thing that grieves not, and that never hopes,
Stolid and stunned, a brother to the ox?
Who loosened and let down this brutal jaw?
Whose was the hand that slanted back this brow?
Whose breath blew out the light within this brain?

Is this the Thing the Lord God made and gave
To have dominion over sea and land;
To trace the stars and search the heavens for power;
To feel the passion of eternity?
Is this the dream He dreamed who shaped the suns
And marked their ways upon the ancient deep?
Down all the caverns of Hell to their last gulf
There is no shape more terrible than this—
More tounged with censure of the world’s blind greed—
More  filled with signs and portents for the soul—
More packed with danger to the universe.

What gulfs between him and the seraphim!
Slave of the wheel of labor, what to him
Are Plato and swing of the Pleiades?
What the long reaches of the peaks of song,
The rift of dawn, the reddening of the rose?
Through this dread shape the suffering ages look;
Time’s tragedy is in that aching stoop;
Through this dread shape humanity betrayed,
Plundered, profaned, and disinherited,
Cries protest to the Judges of the World,
A protest that is also prophecy.

O masters, lords and rulers in all lands,
Is this the handiwork you give to God,
This monstrous thing distorted and soul-quenched?
How will you ever straighten up this shape;
Touch it again with immortality;
Give back the upward looking and the light;
Rebuild in it the music and the dream;
Make right the immemorial infamies,
Perfidious wrongs, immedicable woes?

O masters, lords and rulers in all lands,
How will the Future reckon with this man?
How answer his brute question in that hour
When whirlwinds of rebellion shake all shores?
How will it be with kingdoms and with kings—
With those who shaped him to the thing he is—
When this dumb terror shall rise to judge the world,
After the silence of the centuries?

—Edwin Markham
Posted by Patrick Murfin at 2:00 AM