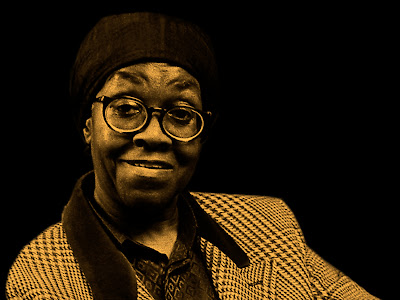 Last week we let the 115th birthday of athlete/singer/actor/activist Paul Robeson slip by unremarked on April 9.  We remedy that situation today with a contribution from Gwendolyn Brooks, the first Black recipient of the Pulitzer Prize for Poetry and the Poet Laureate of Illinois and of the Library of Congress.
Brooks was born in Topeka, Kansas on June 7. 1917.  But she didn’t stay long.  Within the first six weeks of her life her parents joined the Great Migration to Chicago in search of jobs in the booming war time economy of the city.
She grew up in the historic Bronzeville neighborhood on the South Side, the center of a lively Black community often compared to New York’s Harlem.  Her family was warm and supportive. She was bright and accomplished.
First sent to attend Hyde Park High School, the top white school on the South Side, she encountered bitter prejudice and transferred to all Black Wendell Phillips.  She finished up at integrated, but sometimes troubly so, Englewood.  In 1936 she graduated from the city’s Wilson Jr. College.  At these schools she saw and experienced the range of race relations in the divided city.  The experiences profoundly moved and changed her.
By her later high school and college years Brooks was writing and sometimes getting her poetry published.  75 had been published by the time she was 16 and the following year she became a regular contributor to Lights and Shadows, the poetry column of the Chicago Defender.
She had hoped that the connection would win her a job on the staff of the nation’s leading Black newspaper upon graduation.  But it was not to be.  Instead she took up a series of secretarial jobs to support herself while still chronicling the Black experience in the city in her poems.
In 1939 she married Henry Lowington Blakely, Jr. They would have two children, Henry Lowington Blakely III in 1940vand Nora Blakely in 1951.  But she continued to write under her birth name.
Slowly, after taking part in important and integrated poetry workshops, her work began to receive wider attention.  In 1943 she won a poetry prize from the Midwestern Writers’ Conference.  Those credentials and a bulging portfolio of published work led to Harper and Row, a top publishing house accepting her first collection.
A Street in Bronzeville was published in 1945 to critical and commercial success.  She was awarded her first Guggenheim Fellowship and was included as one of the Ten Young Women of the Year in Mademoiselle magazine.
Her second book of poetry, Annie Allen in 1950 garnered her that Pulitzer Prize she became the first African American to win the award for poetry; she also was awarded Poetry magazine’s Eunice Tietjens Prize.
In the 1950’s and ‘60’s Brooks had unprecedented attention for a female Black Writer.  Despite being popular with White as well as Black audiences, she refused to tone down the harsh realities of Black life in the cities and was an outspoken supporter of the Civil Rights Movement, which also earned her a backlash.
After John F. Kennedy publicly and personally invited her to read at a major Library of Congress event, new possibilities opened up for her as a teacher and mentor.  She taught at Columbia College Chicago, Northeastern Illinois University, Chicago State University, Elmhurst College, Columbia University, Clay College of New York, and the University of Wisconsin–Madison.
She enjoyed the experience, but felt teaching largely white students “took the edge off of her Blackness, which she rediscovered at writer’s conference at historically Black Fisk University in Nashville.  The result was a creative renaissance for here as poet.  Her long narrative poem The Mecca about a mother searching for her lost child in an apartment building published in 1968 and which was nominated for a National Book Award.
Brooks continued to write and to teach.  She made a special mission of personally mentoring young Black women writers, the most noted of which was Nikki Giovanitti.
She was honored by many prestigious awards and honors and more than 75 honorary degrees, making her one of the most popular commencement speakers ever.  After her death at age 83 on December 3, 2000 her adopted hometown honored were with Gwendolyn Brooks College Preparatory Academy and Gwendolyn Brooks Park   near her long-time South Side Home.
Today we share Brooks’ ode to another Black cultural hero.
Paul Robeson
That Time, We All Heard It.
That time
cool and clear,
cutting across the hot grit of the day.
The major Voice.
The adult Voice
forgoing Rolling River,
forgoing tearful tale of bale and barge
and other symptoms of an old despond.
Warning, in music-words
devout and large,
that we are each other’s
harvest:
we are each other’s
business:
we are each other’s
magnitude and bond.
—Gwendolyn Brooks
Posted by Patrick Murfin at 2:00 AM