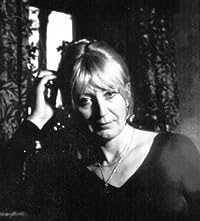 Today we skip across the Pond to include a poet quite unknown over here but who has established herself in England by virtue of a wild, willful, and defiantly sexual life, all of which she recorded faithfully and without flinching in a lifetime of poetry.  Under the pen name Val Kirkham she published The Collected Works in 2008 which encompasses 11 short chapbooks published on line from the time she was a struggling young single mother to her reflective maturity as a full time writer in Lancashire.
I encountered her through her real, not so secret identity, Geraldine Murfin-Shaw, a far distant kinswoman, thought the tireless genealogical efforts Ed Murfin, whose stated mission is to get all of the far flung Murfins across the globe in contact.

Geraldine proved to be a true delight, a blithe and indomitable spirit.  Growing up in Yorkshire she became an embodiment of swinging England in the ‘60’s, reveling in sexual freedom and entirely frank about it—a lifelong trait.  She will not mince words about sex, it joys and peccadilloes spelled out frankly in real world language.  Not for her the gentile masks of literary devices to hint at glorious hedonism.  In ever repressed America—no matter how swamped in cheap pornography we are—her frankness will startle even sophisticated readers.  She would have it no other way.

Trailing lovers and four husbands, she raised two children alone and returned to college in her 30s.  Becoming an accomplished chef, she took jobs as far flung as at a zoo, an island resort, a medieval castle, and even an American college.  That led to the publications of cook books in which tales intertwined with the recipes.

In her middle years she took up an interest in witchcraft, traditional Celtic/Druid religion and what we sometimes dismiss as the occult.  That infused a new richness into her work, as did a bent toward history and scholarship, including tackling translations from Latin sources.

In the ‘80’s she established herself as a performance poet appearing mostly in the Northwest of England and also featured on the BBC.  Her readings were lively, shocking, controversial, and evidently quite entertaining wining her a devoted following. The editor of Lancashire Life called her “the predatory sexual voice cruising in the fast lane of poetry.”

These days she lives singly with her beloved dog, tends her garden, watches out for her nearby aged mother and continues to write.  More cook books and new material are in the pipeline. Her more recent books are published under her current name Geraldine Murfin-Shaw.  Part 1 of her autobiography has been published  and part 2 being written now.

Americans can find copies of The Collected Works and other books under both names can be found o on Amazon.com and other sources.  I recommend it.

For a sample of what she does and is up to visit her web page, The life, loves and literature of Geraldine Murfin-Shaw.

There was a lot to choose some, and I was sorely tempted to give you a full on blast of her wanton sexuality, but I was utterly charmed by this piece.  We’ll save the bawdy stuff for a return engagement.

Romans in My Garden

There are Romans in my garden
they lie beneath the sod
in leather-thonged  armour
safe with their alien god.
They fell here in some battle
launched from the neighbouring hill,
deep in their throat death' s rattle
catches at them still.
I Love you, ancient Romans.
How can I find a way
to journey down the ages
a thousand years away?
The distance in between us
is measured in mere feet,
yet all the longlost ages
lie buried in the peat.
0, Romans in my garden,
rise up at noon today·.
put on your tarnished armour
and lead me far away.
I’ll journey to your hilltop
windswept and bleak and cold,
I’ll cook food at your campfire
as women did of old.
I’ll follow you into battle,
bind up your jagged wounds,
I’ll sleep on skins beside you
Among the burial mounds.
O rise up, ancient Romans.
March down the silent street
and I will march home with you
on fantasy winged feet

Posted by Patrick Murfin at 3:28 AM