Note:  Today is the 100th anniversary of what became known as the Christmas Truce on the Western Front in France in the first year of World War I.  General interest in the bloody conflict that ushered in the era of industrialized warfare with death and destruction of previously unimaginable level has been raised by the centenary and the now semi-legendary truce.  I counted more than a dozen links to items about the Truce posted on my Facebook page yesterday and expect more today, of which this will become just another example.
But it was not always so.  Despite heavy press coverage when it happened, the bitterness of nearly four more years of horrendous mass slaughter and the renewal of even worse hostilities15 years later buried the memory.  It helped that officials on both sides tried to erase it from the consciousness of both the public and their armies.  In 1934, for instance, a Nazi playwright churned out a drama in which a well-meaning German officer trying to bring a Christmas tree across the lines is killed by a British sniper and “all of the lights of the Christmas tree shot out.”
During the Vietnam era when anti-war sentiment surged around the world dribs and drabs of the story began to come out in things like the English film O What a Lovely War, staring John Lennon.  Then in 1984 Wisconsin balladeer John McCutcheon wrote his haunting ballad Christmas in the Trenches which slowly gathered an international following.  Mike Harding’s song Christmas 1914 in 1989 and Garth Brooks in 1997’s Belleau Wood, also told versions of the story.
In 2001the book Silent Night: The Story of the World War I Christmas Truce by Stanley Weintraub renewed interest in the story.  It was followed in 2005 by the critically ac
claimed French film Joyeux Noel.  Since then there have been TV documentaries produced in Britain, Germany, and the United States.
The resurgence of interest that began with Weintraub’s book came close on the heels of the shock and horror of 9/11 and coincided with the launch of the so-called War on Terrorism and the parade of unremitting war since then.  No longer do massive national armies clash on open battlefield.  Instead shadowy enemies from an alien culture make asymmetrical war on civilian populations and meet retaliation by indiscriminate attacks by our technologically superior war machine.  Both sides believe that sufficient terror will lead to a triumph over a demonized enemy.  It is almost impossible now to imagine ordinary combatants on either side recognizing the common humanity of the enemy let alone laying down arms to embrace them, even for a moment.
But we, the whole world, are profoundly war weary now.  When we hear the impossible story of the Christmas Truce, how deeply but unspokenly do we yearn to make it come true again.  Perhaps enough yearning can make it so.
Below is my account of the Truce, reposted from 2012.

Today, of course, is Christmas Eve.  In the Biblical story, set centuries afterwards by the Church at this time to correspond with traditional the Roman solstice festival of Saturnalia, an angel appeared to shepherds abiding in their fields:
And the angel said unto them, Fear not: for, behold, I bring you good tidings of great joy, which shall be to all people. For unto you is born this day in the city of David a Savior, which is Christ the Lord. And this shall be a sign unto you; Ye shall find the babe wrapped in swaddling clothes, lying in a manger.  And suddenly there was with the angel a multitude of the heavenly host praising God, and saying, Glory to God in the highest, and on earth peace, good will toward men.
Unfortunately in the long history of humanity since the days of the old miracle story, peace on earth and good will toward men has often been in short supply.  War and more war seemed the inevitable fate of human kind.  Although Christmas and other Holy Day truces were sometimes observed by medieval feudal armies, by the 19th Century industrial warfare had transformed battlefields into remorseless mass killing fields.  Old notions of gallantry toward enemies were quickly fading.
In December of 1914 the Great War, as it was beginning to be called on all sides, was less than six months old.  Any visions of heroic charges and quick victories cherished by both sides had quickly evaporated against the grim reality repeating rifles, machine guns, and mass artillery that had made the old warfare of maneuver and attack obsolete.
On the Western Front in France the war had settled into a bloody stalemate.  Both sides dug in with make-shift trenches where men lived and died for days on end between futile attacks over a no man’s land between the lines.  As winter closed in the trenches filled with water and slush.  Mud walls often collapsed, burying soldiers alive.  Neither side had good winter uniforms and the men were suffering horribly from cold.
Many of the soldiers on both sides of the line that winter were not the highly disciplined professional troops that were the core of both the German and Allied armies.  Most had been reservists, volunteers or draftees—civilians only months before.  That winter many had not yet been trained or embittered to be remorseless killing machines.
Early on the day of Christmas Eve something strange happened, mostly on the section of the front where British and Imperial troops faced the Germans south from the bloody Ypres salient for 27 miles to the La Bassee Canal.  Here and there firing stopped.  Men in the trenches, often as close a 70 yards apart, began to shout at one another offering Christmas greetings.  Singing broke out in both trenches, and sometimes the two sides joined in common carols—particularly Silent Night (Stille Nacht) and O Tannenbaum (O Christmas Tree.)
Stories differ on how this fraternization spread to become informal local truces.  In at least one spot, the Germans sent a man with a white flag across no man’s land to request a cease fire to celebrate a beloved Captain’s birthday on the trench parapet.  The English officer in charge agreed and crossed back to make arrangements with his counterparts.  In other areas British troops simply allowed the Germans to erect small decorated Christmas trees sent to the lines by the High Command along the trenches.  In other places more formal truces were arranged so that each side could safely retrieve the many bodies that littered no man’s land. 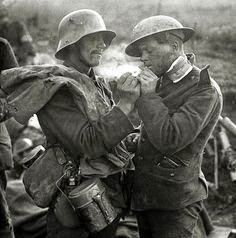 By afternoon troops were out of their trenches and mingling between the lines.  Both the British and Germans had received special Christmas packages of tobacco and sweets.  The men began exchanging some of these items as well as souvenirs like buttons off their uniforms and trinkets from home, even family pictures.  Officers shared their bottles of Scotch, Schnapps, or French wine.  German enlisted men swapped kegs of beer with British soldiers for Bully Beef and jam.  By evening the truce had spread across the entire section of the front and had even taken hold in some additional sectors manned by French and Belgian troops.
That evening some troops engaged in common mess on the battle field and mingled for hours in celebration.  When word got back to the British Command, miles behind the lines, stern order and dire warnings of severe punishment for fraternizations were sent to the front.  Similar orders came from German generals.


But the truce not only held on Christmas morning, it continued to spread.  Up and down the line several soccer games and other competitions were organized through the day.  More dinners were arranged for that evening.
But it could not last.  With more pressure from the Brass Hats desultory firing began that night.  British medical officer Captain J. C. Dunn recounted how it ended in his sector:
At 8.30 I fired three shots in the air and put up a flag with “Merry Christmas” on it, and I climbed on the parapet.  He [the Germans] put up a sheet with “Thank you” on it, and the German Captain appeared on the parapet.  We both bowed and saluted and got down into our respective trenches, and he fired two shots in the air, and the War was on again.
But in some areas the informal truce lingered for a day or two and in other sectors no serious fighting resumed until early January, 1915.  A handful of officers and men were disciplined by the British for disobeying orders or fraternization.

Word of the Christmas truce, complete with photographs, made a sensation in the British press and was also less widely publicized in Germany.  Over the years the event has taken on legendary, even mythical status.     Some much later accounts promoted by Christians pin the event on the actual intercession of Angels and a shared vision of a star-like object in the sky.  Peace advocates have long seized on the story as an example of how common soldiers could end war by simply refusing to fight.

On the other hand, military pragmatists continue to condemn the unauthorized outbreak of peace.  Most armed forces, including the U.S. have developed specific “command and control” policies to nip any future movements toward goodwill across lines in the bud.

Posted by Patrick Murfin at 4:52 AM