Made for Pulp—It Came to Him in a Dream 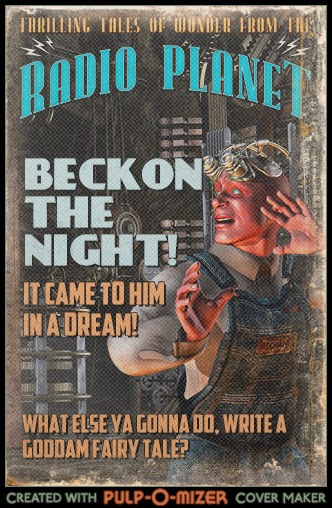 This blog post exists exclusively because a friend posted on Facebook a nifty toy—a program to create your own old time lurid pulp magazine cover.  The opportunity was too great to pass up, even if the options were limited classic ray gun and rocket ship science fiction.  Not the best fit for the poem that immediately leapt to mind which seemed to cry out for the pulp treatment.
Here’s hoping that the folks at webomator.com’s Pulp-O-Mizer soon add other classic pulp genres—gothic, mystery, western, adventure, romance, and the one I really needed, hard-boiled detective.
It was like trying to pound a square peg into the proverbial round hole to make the sci-fi theme fit the poem.  But it was too much fun to resist.  See the results above.
As for the poem, it actually did come to me in a dream, or at least the catch phrase “Beckon the Night.”  Quite early one morning I woke up suddenly with the phrase in my head and headed directly to the computer to pound out some verse, which subsequently underwent far less than usual editing and revising.
It was directly inspired by film noir—but that genre had its roots and got most of its stories from cheap detective pulp magazines.  The two forms were meant for each other.

It Came to Him in a Dream

“It came to him in a dream!”
The urgent, rumbling voice intones,
architectural letters scroll the screen—
Beckon the Night.

This gift of Morpheus
sticking, as almost nothing ever does
when brought bolt upright
by an insistent alarm.

I’ll need a double shot
of Dashiell Hammett for this,
pulled from the second desk draw
next to the snub nose
poured into a greasy tumbler.

And a dame, gotta have a dame,
ash blonde and weeping
wreathed in Herbert Tareyton garlands.

What else ya’ gonna do with
Beckon  the Night?
Write a goddam fairy tale?

Email ThisBlogThis!Share to TwitterShare to FacebookShare to Pinterest
Labels: facebook, It Came to Him in a Dream., Patrick Murfin, Poetry, Pulp magazine cover, Pulp-O-Mizer