Lift Every Voice and Cry…


An old, stirring song written in 1900 by James Weldon Johnson and set to music by his brother John Rosamund Johnson began with the words “Lift every voice and sing.”  It was written at a moment in time when Black Americans were under incredible pressure.  Almost all of the gains save the abolition of chattel slavery had been erased by the imposition of Jim Crow laws in the states of the old Confederacy and in border states as well.  In the North de facto segregation worked just as well as that imposed by law in hemming in the opportunities for most people of color.  Yet the song was a hopeful anthem.  It was first performed on Lincoln’s Birthday in honor of a speech to be given by the apostle of boot-strap racial self-improvement by education Booker T. Washington at a segregated school in Jacksonville, Florida.  It would be widely popularized by the Fisk Singers, the traveling choir from Nashville’s Fisk University, then the most prestigious Black college in the country.  It was a song that spoke for the dreams and aspirations of a sliver of the Black population—a tiny, educated elite that felt it must lift the whole race on its shoulders.
The song became known far and wide as the Black National Anthem and continued to be sung through the Civil Rights campaigns of the 1950’s and ‘60’s alongside earthier, more militant songs rooted more in Black gospel and blues and less on European choral traditions.
Much has changed since those hopeful words were first voiced.  Hard won victories smashed Jim Crow.  Voting rights were won at a painful cost in blood and tears.  The election of a Black man as President of the United States was heralded by some as the inauguration of a new, supposedly post-racial era.
How quickly those gains have been eroded or shown to be illusionary.  That Black President in no time became the focus of rage for many whites many of whom barely understood that the root of their anger was the fear of losing privilege and its racial motivation.  A greater percent of children, North and South, are in segregated public schools today than in 1950.  Blacks lost more jobs in the Great Recession than any other racial or ethnic group, have recovered fewer of them, and have lost the most real income collapsing much of what had been a fragile Black middle class.  Most shockingly of all, a fifth of all adult black men at any time are incarcerated and more than half will be jailed in their lifetimes.  Police departments, largely White but including many Blacks, have become occupation armies whose primary function is the protection of White property and the preservation of systematic dominance.  The rule of an oligarchic elite—the 1% in the term popularized by the Occupy movement—survives by exploiting fear of supposedly animalistic Black violence to prevent almost equally disenfranchised and marginalized Whites, Latinos, Native American, and Asians from uniting with Blacks.
All of this has come to a head with a string of ugly police murders of unarmed Black males with seeming impunity.  You know the drill—Michael Brown in Ferguson, Missouri; 12 year old Tamir Rice killed for playing with a toy pistol just two seconds after the arrival of a White cop; and Eric Garner a very large Black man who may have been guilty—gasp!—of making some spare change by selling individual cigarettes to the desperate who was swarmed by police and wrestled to the ground by an illegal choke hold as he gasped, “I can’t breathe!”  In the first and last cases grand juries refused to indict the killer cop setting off nation-wide demonstrations.  In the case of young Rice absolutely nobody expects a different result.  And these are not isolated instances, but just egregious examples of police killing that have been repeated scores of time around the country every year.  More than 500 American citizens are killed by our own police every year—a hefty majority of whom are Black males, some unarmed, and many other in questionable circumstances.
The reactions to these events have divided the nation.  Black almost unanimously are outraged and hurt.  They are becoming more willing to confront the violent oppression on the streets which is a daily part of their lives.  Many Whites reflexively believe that any police action against Blacks is somehow justified.  Even many White liberals who annually celebrate Martin Luther King Day, who would never dream of uttering the N word, and who like to congratulate themselves on being colorblind cannot grasp that these killings are part and parcel of deeply ingrained racial animus.  They are taking affront by being accused benefiting from White skin privilege.

The denial is staggering. My colleagues are weighing in, one by one and then in a rush, commenting on Facebook and e-mails and in messages about their conversations with white parishioners who don’t get it, who are sunk up to their knees like quicksand in white privilege and denial and a worldview that wants to assume that this doesn’t just happen and he must have done something and you don’t know everything and did you read the report? and did you read it as thoroughly as I did, because if you did you wouldn’t be so upset, you wouldn’t be sick and snarling and enraged and disgusted with humanity right now, you’d be the nice, comforting minister I expect you to be.

It’s tough.  I know. And exhausting.  I refrained since last summer from weighing in.  I told myself that others were saying what I would say and they are saying it better.  Who needs my voice?  And I don’t want to become a nuisance or a nag.  And I am just a two-bit blogger with a tiny following. 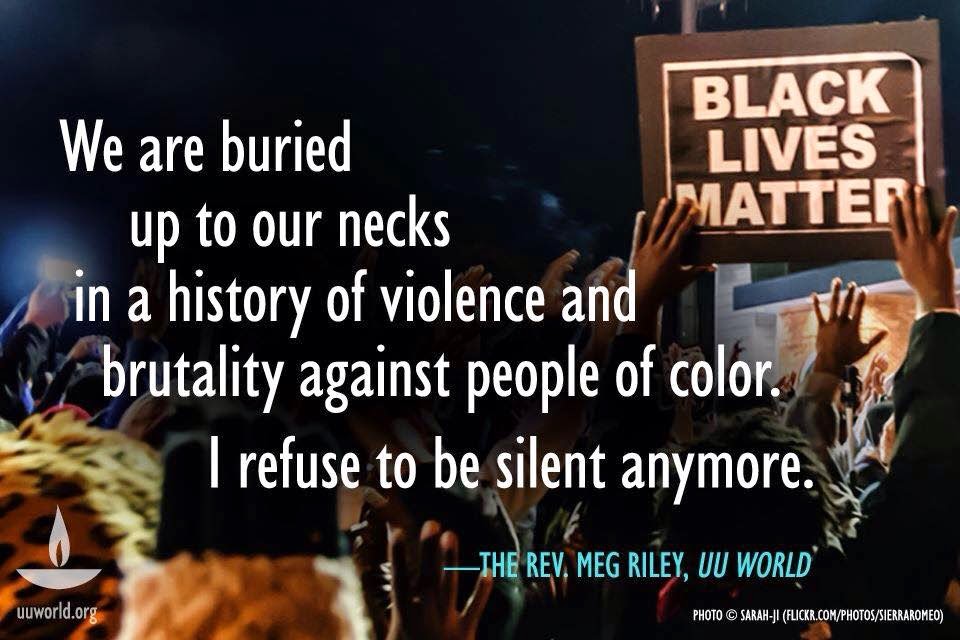 But the time for silence is past, if it was ever appropriate.  Dr. King used to go on about how the silence of the good empowered evil.  He said it half a dozen different ways at different times.  He knew what he was talking about.

We, White folks who have finally grown tired of violence and oppression in our name need our own Anthem now.  Perhaps we could call it Lift Every Voice and Cry.  Perhaps it would inspire us to speak out, to march, and, yes, just to listen.

This is my cry.