Science Fiction and Fantasy, the genres frequently lumped together as speculative fiction that attempt to either seriously examine the moral, ethical, and philosophic issues of this world by imagining others or simply the surrender to our inner ten year old,  have long been popular niche reading.   But they have grown from the province of nerds with taped glasses with their stashes of lurid pulp magazines and dreamy little girls with unicorn and dragon fetishes, to a cultural power house that sometimes seem ready to crush and consume everything else like a Japanese reactor by a tsunami.  The mega-million selling series of fat books, the comic books, the block-buster high-tech movie epics, the odd and dark TV series, the fan conventions that fill giant exposition halls.  You know the inescapable drill.
But there has also been, maybe a tad quieter, a complimentary growth of SF poetry.  It even has its own organization, the Science Fiction Poetry Association (SFPA) founded by Suzette Haden Elgin in 1978 and major award, the SFPA’s Rhysling Award.
The origins of modern speculative poetry are as hard to pin down as a hopping flea.  There are examples with characteristics dating back centuries, not to mention ancient myth, epic poetry, and folk ballads.  On the fantasy side of the tradition, revived interest in those old forms, including fairy tales by Victorian romantics stimulated writers to weave their own tales and poems set in the worlds of those old tales or inspired by similar wonder and magic.

The English poet Christina Rossetti (1830-1894) is sometimes credited with the first modern fantasy poem for her narrative poem Goblin Market, fraught with sexual tension, in 1859.  It was published as the title poem of a collection 3 years later with illustrations by her brother, the Pre-Raphaelite artist Dante Gabriel Rossetti.  Below are the first two and final stanzas of that long poem.

Evening by evening
Among the brookside rushes,
Laura bow’d her head to hear,
Lizzie veil’d her blushes:
Crouching close together
In the cooling weather,
With clasping arms and cautioning lips,
With tingling cheeks and finger tips.
“Lie close,” Laura said,
Pricking up her golden head:
“We must not look at goblin men,
We must not buy their fruits:
Who knows upon what soil they fed
Their hungry thirsty roots?”
“Come buy,” call the goblins
Hobbling down the glen.

Days, weeks, months, years
Afterwards, when both were wives
With children of their own;
Their mother-hearts beset with fears,
Their lives bound up in tender lives;
Laura would call the little ones
And tell them of her early prime,
Those pleasant days long gone
Of not-returning time:
Would talk about the haunted glen,
The wicked, quaint fruit-merchant men,
Their fruits like honey to the throat
But poison in the blood;
(Men sell not such in any town):
Would tell them how her sister stood
In deadly peril to do her good,
And win the fiery antidote:
Then joining hands to little hands
Would bid them cling together,
“For there is no friend like a sister
In calm or stormy weather;
To cheer one on the tedious way,
To fetch one if one goes astray,
To lift one if one totters down,
To strengthen whilst one stands.”

On the science fiction side, in which new possibilities are opened in this world by science and new worlds are envisioned in the future rather than the time misted past, Mary Shelley’s Frankenstein and Edgar Allen Poe’s (1809-1849) short story Murders in the Rue Morgue and his famous Balloon Hoax were among the first fiction pieces linked to modern Sci-Fi although both were linked to the sometimes overlapping horror genre and Murders is often cited as the first detective story as well.  But the Frenchman Jules Vern, who was particularly inspired by Poe, generally gets the credit as the founder of science fiction.
At first, by its very nature, which often swung from gee-whiz science and technological innovation to testosterone heavy heroics in the early day, did not lend itself much to quality poetry.  Early verse pickings are slim, almost hints.  Sir Arthur Conan Doyle (1859 - 1930), most famous in science fiction for his Lost World, penned some short verse that occasionally bumped up against ideas central to speculative fiction.  In this one he represents essential skepticism and the limits of our abilities to understand things beyond our experience, both eternal SF themes.
A Parable

The cheese-mites asked how the cheese got there,
And warmly debated the matter;
The Orthodox said that it came from the air,
And the Heretics said from the platter.
They argued it long and they argued it strong,
And I hear they are arguing now;
But of all the choice spirits who lived in the cheese,
Not one of them thought of a cow. Still, on the whole, fantasy has lent itself more easily to poetry.  The most influential of all fantasy writers, J. R. R. Tolkien (1892-1972), the English antiquarian scholar, translator, and artist whose epics of Middle Earth made grown up fairy tales for adults.  He laced his books with verse, sometime in the guise of songs or lore from the many creatures that inhabited his strange lands.  Some have become little classics on their own like this one from chapter 10 of Lord of the Rings.

All That is Gold

All that is gold does not glitter,
Not all those who wander are lost;
The old that is strong does not wither,
Deep roots are not reached by the frost.
From the ashes a fire shall be woken,
A light from the shadows shall spring;
Renewed shall be blade that was broken,
The crownless again shall be king. 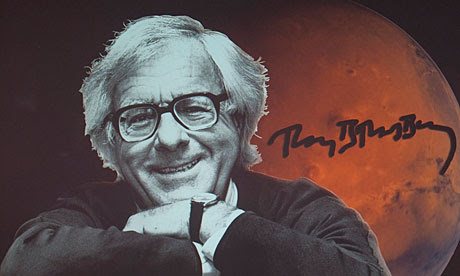 Eventually science fiction, which was fostered in pulp magazines with lurid covers in the ‘20’s and’30’s, began to go deeper, ask more probing questions, especially in the aftermath of World War II and the dawn of the Atomic age raised questions about the inevitable progress of science.  Soon hard science writers like Isaak Asimov and Ray Bradbury were making serious alternative fiction.  Bradbury was also a poet.  This poem was written by Bradbury (1920-2012) to be recited on a program with Arthur C. Clarke, Carl Sagan and others at NASA’s Jet Propulsion Labs in Pasadena to commemorate the Mariner 9 mission to Mars.

If Only We Had Taller Been

The fence we walked between the years
Did bounce us serene.
It was a place half in the sky where
In the green of leaf and promising of peach
We'd reach our hands to touch and almost touch the sky,
If we could reach and touch, we said,
‘Twould teach us, not to, never to, be dead.
We ached and almost touched that stuff;
Our reach was never quite enough.
If only we had taller been,
And touched God’s cuff, His hem,
We would not have to  go with them
Who've gone before,
Who, short as us, stood tall as they could stand
And hoped by stretching, tall, that they might keep their land,
Their home, their hearth, their flesh and soul.
But they, like us, were standing in a hole.
O, Thomas, will a Race one day stand really tall
Across the Void, across the Universe and all?
And, measured out with rocket fire,
At last put Adam's finger forth
As on the Sistine Ceiling,
And God's hand come down the other way
To measure man and find him Good,
And Gift him with Forever’s Day?
I work for that.
Short man, Large dream, I send my rockets forth
between my ears,
Hoping an inch of Good is worth a pound of years.
Aching to hear a voice cry back along the universal Mall:
We’ve reached Alpha Centauri!
We’re tall, O God, we’re tall!

Perhaps a woman who wrote some of the most enduring classics of both science fiction—The Left and of Darkness, The Dispossessed, and Lathe of Heaven—and fantasy—The Earthsea series—would be a natural at translating the spirit of those works into verse.  Ursula K. Le Guin, born in 1929 two days after the great Stock Market Crash and still active and vital today, is one of my favorite contemporary American writers in any and all genres.

Somewhere I read
that when they finally staggered off the mountain
into some strange town, past drunk,
hoarse, half naked, blear-eyed,
blood dried under broken nails
and across young thighs,
but still jeering and joking, still trying
to dance, lurching and yelling, but falling
dead asleep by the market stalls,
sprawled helpless, flat out, then
middle-aged women,
respectable housewives,
would come and stand nightlong in the agora
silent
together
as ewes and cows in the night fields,
guarding, watching them
as their mothers
watched over them.
And no man
dared
that fierce decorum.

In recent years Millennials and their younger sibling, having grown up in a deeply world that seems wildly out of their possible control and from which they are deeply alienated, have become fascinated with dystopian and apocalyptic literature.  Not that dystopianism is new—indeed it seems historically for ever Utopia is a black world gone horribly wrong.  But once speculative literature, especially science fiction, was largely optimistic.  Mirroring the words that once inspired 19th Century Unitarians and early 20th Century Humanists alike, Sci-Fi writers tended to expect a world transformed by technology and “the progress of mankind onward and upward forever.”  Bitter experience has just about crushed that dream, thus the radical turn to dystopianism and it appeal to the young in things like Suzzane Collins’s Hunger Games series and its many clones.  Margaret Atwood, born in 1939, whose The Handmaid’s Tale may have made her the spiritual godmother to current young writers, still catches the mood and spirit of this literature.
Siren Song
This is the one song everyone
would like to learn: the song
that is irresistible:

the song nobody knows
because anyone who had heard it
is dead, and the others can’t remember.
Shall I tell you the secret
and if I do, will you get me
out of this bird suit?
I don’t enjoy it here
squatting on this island
looking picturesque and mythical
with these two feathery maniacs,
I don’t enjoy singing
this trio, fatal and valuable.

I will tell the secret to you,
to you, only to you.
Come closer. This song

is a cry for help: Help me!
Only you, only you can,
you are unique

at last. Alas
it is a boring song
but it works every time.