FDR’s Prequel to the WPA Was a Hit

On November 8, 1933 President Franklin Delano Roosevelt announced plans to create the new Civil Works Administration  which, he said, would provide up to 4 million jobs for the unemployed while doing important work building roads, bridges, sewer lines, and other infrastructure.  In a 5 month run over the winter of 1933-34 over a billion dollars was spent putting people to work.
The basic idea was improved and expanded upon as the Works Progress Administration (WPA) funded by Congress in the Emergency Relief Appropriation Act of 1935.  The WPA was on its way to becoming the single biggest program of the New Deal under the personal supervision of FDR’s most trusted aide, Harry Hopkins.
Unlike the companion Civilian Conservation Corps, which was designed for younger workers, many of them single, to get them out of the cities where they might otherwise become idling malcontents and easy prey to Reds and agitators, the WPA was aimed squarely at economic heads of households to provide employment where they lived.  This meant that the overwhelming majority of enrollees were men.  Where women were enrolled, their husbands were typically absent, disabled, elderly, or had been unable to find work in at least 5 years.
To counter concerns by the labor movement that public employment would undercut union wages, pay was figured on an adjustable scale dependent on whether the area was urban or rural, local cost of living, and prevailing wages.  To counter employer fears that workers would never leave government jobs when private employment picked up, workers were limited to 30 hours per week.  In the work-starved Depression years, that meant a WPA job meant a livable, but not generous support for families.
After some early stumbles, Blacks, Native Americans, and other minorities were represented at or above their percentage of the workforce.  In the South, however, work gangs were segregated, more advanced jobs limited or forbidden to Blacks, and wages unequal.
The originally conceived public works projects changed the face of America transforming both the urban environment and a road system that at the beginning of the Depression was still built for the horse and wagon.  By June of 1941 the WPA reported that over $4 billion was spent on highway, road, and street projects; more than $1 billion on public buildings; and more than $1 billion on publicly owned or operated utilities. 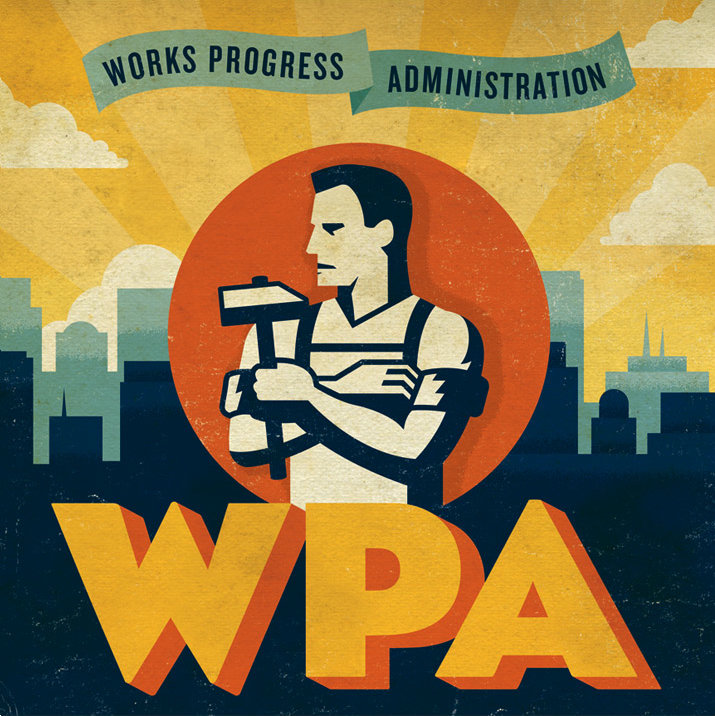 But the range of work undertaken was astonishing.  Women were employed in sewing projects that produced uniforms for the CCC and military.  There were programs to distribute surplus commodities and provide school lunches.  A popular program built libraries and provided library services, including bookmobiles to underserved rural and urban areas.
One of the most controversial aspects of the WPA was its programs to provide work for the white collar unemployed, as well as laborers.  WPA projects employed engineers, draftsmen, accountants and bookkeepers, lawyers, and supervisors as needed.  Teachers were employed in pilot education projects and to train workers in job skills.  Most controversial were the programs to provide work for writers, visual, and dramatic artists.
The Federal Writers’ Project (FWP) employed thousands of writers, including many of minority and working class origin, on a wide range of projects, the most famous of which were The State Guidebooks.  These books were assembled for each state and territory and included comprehensive reviews of the history, geography, economic development, and ethnography of each state.  The books were printed in uniform editions by the states.  Today they are considered invaluable resources for any researcher.


Likewise the Federal Art Project (FAP) employed artists to produce more than 200,000 separate works including posters, murals, and paintings.  The art, particularly the murals, installed in public buildings, schools, libraries, train stations, and elsewhere helped transform public space.  Many works are still considered classic treasures.  Others have been destroyed by demolition of the building they were in or were mutilated by renovation and being painted over.  Today WPA art is being re-discovered, treasured, and restored in many places where it has been found.
Artists and writers naturally comment on the world around them.  Although the majority of work by both projects was apolitical, many efforts vocally supported the labor movement, protested racial injustice, and advocated for the rights of women.  These voices were bitterly denounced by conservatives who waged a relentless, but unsuccessful campaign to defund these WPA agencies.
Conservatives also decried many of the public works projects as unnecessary make work and accused WPA workers of shovel leaning and other laziness.
Despite these criticisms by the time that the WPA was ended in 1943 amid the essential full employment caused by World War II, had spent a staggering for the times $11 billion.  It was the largest single employer in the country.  In the peak year of 1938, it employed 3.3 million people—nearly every person eligible under the program’s guide lines. It has been called the most successful of all New Deal programs not only for putting people back to work, but for the transformative legacy of its public works projects.
Posted by Patrick Murfin at 9:00 AM