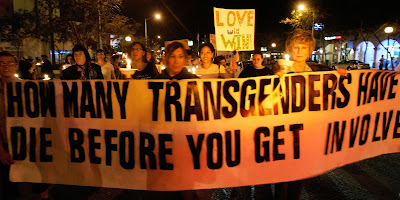 Maybe because their names and faces get lost in the grim glut of crime reporting. Maybe because no one knew their story—or their secret.  Maybe it’s because the Guardians at the gate want to protect our tender sensibilities.  Maybe it’s because outside of “those people” no one cares.  Or maybe it’s because some see a kind of rough justice acted out on the streets and prefer to let it go on as they used to whistle in the dark at lynchings that kept Black folk in their place.
But someone must remember these transgender people murdered every year simply because of who they are.  According to transgender-transphobia.org  226 trans persons were murdered world-wide from October 1, 2013 to September 30, 2014, the latest numbers available.  That included 100 in the U.S.—one almost every three and a half days.
The actual numbers are likely higher.  There is no uniform reporting of crimes against trans and gender-diverse people ranging from those who have completed surgical reassignment, those who identify with a gender other than the one assigned at birth, those who embrace gender ambiguity, cross dressers, and drag performers who may be perceived as trans regardless of their orientation.  Many police reports identify victims only by their genitals and, especially in urban, crime plagued areas, most murders not involving children, multiple victims, or white, or prominent victims are not covered by the press.
Levels of violence have remained relatively consistent, but there is antidotal evidence that recent news coverage of Caitlin Jenner; Chelsea Manning, the Army intelligence analyst who released classified information in the Wiki Leaks case and who declared a new gender identity in prison; and other high profile trans people may have led to increased attacks.

Black trans women are also over represented by percentage of the population among American victims.  Often tenuous and sometimes strained relations between activists in the trans, Black, Gay, and feminist communities have sometimes stood in the way of common action and protest.
Perhaps ironically the International Transgender Day of Remembrance had its origin with the murder of Rita Hester, transgender African-American woman murdered in Allston, Massachusetts on November 28, 1998
Like so many memorial days do, an outpouring of community grief and anger led to a candlelight vigil held the following Friday, December 4 with 250 people in attendance.

This vigil inspired the Remembering Our Dead web project and the International Transgender Day of Remembrance.  Gwendolyn Ann Smith, a transgender graphic designer, columnist, and activist helped organize the first public vigil in honor of all victims the next year in San Francisco in November of 1999.

Since then, the observation has spread across the world. In 2010, the occasion, now held annually on November 20, was observed in over 185 cities in more than 20 countries.
Many local, national, and international organizations now participate in and promote the Day of Remembrance.  I am proud to say that the Unitarian Universalist Association and the Standing on the Side of Love campaign have played a leading role.  Both provide resources and materials that can be used in organizing local observances or worship services.  Many UUA congregations include some part of their services this time of the year to the memorial.
Materials for services can be found on the Standing on the Side of Love web site. They are instructive and moving to read even if there is no local vigil or service to attend.