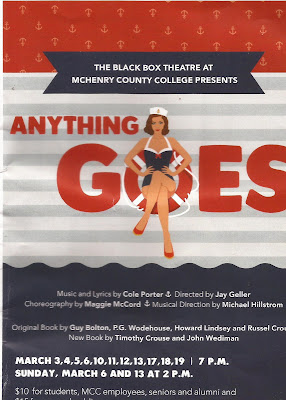 Kathy and I really enjoy the productions at the Black Box Theater at McHenry County College under the deft direction of Jay Geller.  Shows regularly far outshine the limited expectations for community college productions and rival plays at large more prestigious colleges and universities or at top flight community theater.  Plays are selected with a real sense of adventure and stretching the boundaries of what is possible in their clean but Spartan production space—as advertised a literal black box.  And with tickets only $10 a pop, the shows are the best entertainment value in these parts.
This time we caught Anything Goes on the penultimate night of its three week run.  We would have gone earlier, but shows in the intimate theater were sold out.
At first glance the sprawling, boisterous Depression Era Cole Porter romp should be entirely unsuitable for the shallow stage with the audience right on top of the action.  The show is famous for its big, splashy production numbers, large ensemble, elaborate dance numbers, and showcase roles for a big voiced diva and a comic mug.  How the hell do you get that into a space seemingly better suited for vest pocket productions?  Surprisingly well, thank you, due to imaginative production and set design, deft use of space, and a strong (mostly) very young cast.
Their challenges were many, not the least of which was the mastery of Cole Porter’s delicious and tricky lyrics, rife with tongue twisting patter, stylish archness, and rapid fire cultural references that most of the cast would be strangers to—think of the allusions in I Get a Kick Out of You, You’re the Top, Friendship, and the famous title number.  Yet most of the cast navigated the challenges with aplomb.

And then there is the dancing—legions of chorus boys and girls on the Broadway stage doing precision work, energetic tap and soft shoe, and romantic ballroom twirls.  Dancing is the downfall of many non-professional shows.  Real, trained hoofers are in short supply and not everyone who came up through high school chorus is a quick study on their feet.  Geller stripped down the ensemble to four sailors, four night club backup singers, a handful of passengers on the SS America, and the supporting characters.  When on stage together they adequately fill the wide but shallow ship set.  Choreographer kept the foot work simplified and kept her best hoofers up front.  Those a little heavier on their toes could play it as part of their character.  Luckily the main diva was light on her feet and a fine dancer.
As for the plot, well, there hardly is one and that is totally ridiculous.  It features boy and earnest young stock broker named Billy Crocker who stows away on the cross Atlantic voyage of a passenger liner in pursuit of his unrequited love, socialite Hope Harcourt, who is engaged to eccentric Englishman Lord Evelyn Oakley.  Also on board is night club thrush Reno Sweeny who has her own thing for Billy and seems somehow connected in her past to several passengers and Moonface Mullin, Public Enemy #13 and his moll Erma.  Billy hatches insane plots to breakup Hope and the Brit, eventually abetted by Reno, and Mullin who is hiding out disguised as a priest.  There are plenty of silly disguises, mistaken identities, opening-and-closing-door-farce, and blackout gags to fill the moments between musical numbers.  And those numbers do not necessarily in the later tradition of book musicals like Oklahoma! advance the plot.  It is all utter nonsense and is meant to be.
Since the show was first a smash hit on Broadway in 1934 starring Ethel Merman as Reno, William Gaxton as Billy, and character actor Victor Moore as Moonface, the two movie adaptions—both staring Bing Crosby and various revivals and London West End production, has tinkered, sometimes drastically with the script, removed some of the original songs and replaced them with other Cole Porter standards.   This production follows many of the innovations introduced in the 1987 Broadway revival.


Aside from Porter’s music, the show rests on the shoulders of the actress/singers who have played Reno Sweeny.  And they have traditionally been power house show stoppers including Merman, Patti LaPone in ’87, Elaine Page in London in 1989, and Sutton Foster in the multiple Tony Award winning 2011 revival.  Those are hard shoes to step into.  But Deanna Golema has all of the charisma necessary to light up the Black Box space.  Pretty and slender she seems at first glance to be impossibly young to play the been-there-done-that nightclub chanteuse with a past.  But this is, after all, a mostly student production and shortly after launching into I Get a Kick Out of You in Scene 1, all doubts are dismissed.  She’s the star, and she knows it which is essential to the show.   Colema doesn’t have the overwhelming vocal power of Merman or LaPone, but she doesn’t need it.  She is not belting it out on a vast Broadway stage before a packed audience of thousands.
The show is designed to make it clear that the erstwhile hero, Billy, is a fool for rejecting the charismatic but warm hearted Reno for the simply pleasant female juvenile Hope, played by Larisa Bell.  That makes Hope a kind of thankless job.  She can only shine brightly enough so that we are not totally disappointed when Billy ends up with her in the end and Reno waltzes off with the wacky Brit.  Larisa sings sweetly, but is not given the best of Porter’s songbook except for the duet with Billy on DeLovely.  No one leaves the theater singing her Goodbye, Little Dream, Goodbye.
The antics of Moonface Martin played by Gary Mackowiak provide the comedy that makes the audience forget the flimsy plot.  Simultaneously dim witted and somewhat cuddly version of a Warner Bros. gangster—Edward G. Robinson on acid maybe.  After Reno recruits him to help her abet Billy’s romance things spin rapidly, and hilariously out of hand.  There was more genuine laughter in the house over his antics than I have heard at many flat-out comedies.  Even his number in the Brig with Billy singing an alleged Australian tramp ballad Be Like a Bluebird was an unexpected show stopper.
Speaking of show stoppers, the evening highlight is the big second act finale Any Thing Goes with Reno being her most fabulous along with the entire company.
Robert Morvay as Billy carries the plot on his shoulders and is in more scenes and production numbers than any other cast member, including Golema.  He is good looking enough to be a serious heart throb but an impulsive dope in successive disguises clumsily pursuing Hope, avoiding getting caught as a stow away or recognized by his wealthy, liquor saturated boss.
All in all it was a good night.  Fun was had and that is worth ten American Dollars any night of the week.

Posted by Patrick Murfin at 5:51 AM