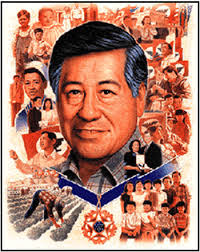 If a person is extremely fortunate in his life, he or she may have an opportunity to meet—and better yet support in some meaningful, if small way—his heroes.  I have been blest beyond measure by knowing and working closely some of the legendary figures of the Industrial Workers of the World (IWW).  I got to meet and march with Martin Luther King in Chicago.  And I got to meet César Chavez and help establish the grape and later the lettuce boycotts as the IWW’s representative on the Chicago Labor Support Committee for the UFW.
Chavez was born on March 31, 1927 in Yuma, Arizona to a family with deep roots in the state.  His father owned a small grocery store and ranch, but lost the business and the family homestead in the Depression at least partly as a result of fraud.  Young César and his five siblings moved to California with their parents where they all entered the world of migrant farm laborers.  The family experienced long hours in the fields, harsh conditions in crowed and dirty migrant camps, and prejudice and hostility to “Greasers” by the communities in which they had to live or travel.
Like all of the children, César often had to miss school to work in the fields or because the family was traveling.  Despite being an eager and bright student, he came from a family that spoke only Spanish at home and was often punished at school for the use of his native language.  He managed to graduate eighth grade, but then had work full time in the fields to help support his family.
In 1944 at the age of 17 he enlisted in the Navy for service in World War II.  He experienced intense discrimination, confinement to menial jobs with no possibility of advancement, and a rigid discipline.  He described his two years of service as the worst time of his life.
Back in California and working in the fields Chavez married his childhood sweetheart, Helen Favela in 1948.  The couple moved to San Jose, California which served as home base while both continued to work in the fields.  Eventually they had eight children.
In San Jose Chavez met and was mentored by Father Donald McDonnell, with whom he often discussed the plight of farm workers and from whom he learned something of the history of labor struggles in the fields.  Father McDonnell introduced him to the ideas of St. Francis of Assisi, Gandhi, and nonviolence.  He also launched him on a life long program self-education through wide ranging reading.
Chavez continued to follow the crops until 1952 when he met Fred Ross, founder of the Community Service Organization (CSO), an organization for the Hispanic community affiliated with Saul Alinsky’s Industrial Areas Foundation.  Ross recognized leadership skills in young Chavez and hired him as an organizer for the CSO.  Trained by Ross in Alinsky’s techniques, Chavez organized around police brutality issues and led voter registration drives.  He traveled through out California for the organization and became increasingly drawn to struggles for worker’s rights.  He rose to become National Director of the CSO in 1958, a position he kept until 1962.
In 1962 Chavez left the CSO to concentrate on the plight of farm workers on the job.  That year with Delores Huerta and his brother Richard, Chavez founded the National Farm Workers Association (NFWA), a fledgling labor organization.  At his suggestion his brother Richard created the symbol of a stylized black Aztec eagle as the symbol of the new organization and created the bright red banner with the eagle highlighted in a white circle that soon became familiar in fields across the state.
Huerta and Chavez hoped to merge the tactics of non-violence used by Martin Luther King and the Civil Rights Movement with a renewal of long battles for union representation in the fields.  But in the early years, members were few and the organization struggled.

Despite his deep ties to the Mexican-American migrant community, the organization did not really take of until 1965 he threw the support of the NFWA behind Filipino workers striking in Deleno, the same fields where his family had labored and where he met his wife.  He broadened the strike to other fields bringing out Chicano and other migrants.  Within a few months he led a historic march from Deleno to the state capitol in Sacramento to demand better wages and working conditions in the fields. The Deleno strike dragged on for five years, with picketers regularly attacked by grower-hired thugs and harassed by local police and Sheriff Departments.  In the face of many provocations, Chavez always counseled his members in nonviolence.
The national news media began picking up on the struggle, particularly after the U.S. Senate Committee on Labor’s Subcommittee on Migrant Labor came to California to hold hearings where member Robert F. Kennedy expressed strong support for the workers.  It was the beginning of a long relationship between Chavez and the Kennedy Prince.
The NFWA merged with the Agricultural Organizing Committee, sponsored by the AFL-CIO to become the United Farm Workers Organizing Committee (UFWOC), which launched a nationwide boycott of table grapes to pressure the growers into concessions.
As tensions in the fields grew, some rank and file members began advocating self defense against attacks by thugs and police and perhaps action against scabs in the fields.  In 1968 Chavez launched his first great fast, 25 days long to rally his people to nonviolence.  He attracted the attention and support of his hero Martin Luther King and Robert Kennedy returned to California to participate in the peace mass that broke the fast.
In return UFW members worked hard for Kennedy in the California Presidential Primary that spring.  They, and Chavez, were devastated by his murder at the very moment of his victory.
In 1970 UFWOC stepped up its national grape boycott campaign, organizing local support committees around the country to picket markets selling scab grapes.   The boycott was effective.  In 1970 the most growers had enough.  Even the most recalcitrant Deleno growers filed into the dilapidated union hall to sign an agreement.


The grape strike and boycott was no sooner won than California lettuce growers signed sweet heart contracts with the Teamster’s Union aimed at keeping the UFW out.  Chavez led some 10,000 farm workers out on strike in protest, prompting many growers to abandon the Teamsters and sign with the UFW.  A new nation-wide boycott of non-union and scab iceberg lettuce was launched.  Chavez was jailed for violating a court order against the boycott, and was visited in jail by Coretta Scott King and Bobby Kennedy’s widow Ethel.
When the original UFW contracts with table grape growers and vintner Ernest and Julio Gallo expired in 1972, growers rushed to sign with the rival Teamsters without any consultation with their workers.  Chavez led thousands out strike in protest while growers obtained injunctions against picketing.  Over 3500 strikers were arrested, hundreds beaten and at least two shot and killed.  Alarmed by the violence, Chavez halted the walk out but announced a second grape boycott.  Within a few months an astonishing 17 million Americans were boycotting scab grapes, lettuce and/or Gallo wines.
California Governor Jerry Brown helped Chavez achieve his long cherished goal of a state agricultural labor relations law that guaranteed the right of farm workers to organize in 1975.  Despite this, the balance of the ‘70’s and much of the ’80’s was a long running battle between the UFW, since 1972 an official independent affiliate of the AFL-CIO on one side, and growers, their Teamster allies, and Republican politicians on the other.
There were many strikes and boycotts, long marches and hunger strikes.  Chavez and the union were under constant legal harassment by growers filing multi-million dollar law suits against them.  Through it all Chavez persevered and held fast to his cherished nonviolence.  In the mid eighties he turned his attention to the use of pesticides in the fields and the health effects on workers and—ultimately—consumers.  Yet another grape boycott was called to protest the use of poisons and in 1986 he went on his longest and last fast lasting 36 days to draw attention to the cause.
Chavez never fully recovered from the effects of that fast, although he continued his tireless work.  On April 18, 1992 at the age of 61 and worn out, he died in his sleep in the modest home of an Arizona migrant worker.  Forty Thousand mourners marched in his funeral procession.
In September 1984 President Bill Clinton, posthumously awarded Chavez the Presidential Medal of Freedom.  More recently in 2011President Barack Obama proclaimed March 31 César Chavez Day and urged Americans to “observe this day with appropriate service, community, and educational programs to honor César Chávez’s enduring legacy.”  Today there are ongoing efforts to have his birthday declared a holiday in various states and by the Federal Government.
Chavez’s legacy lives on in the movements for immigrants’ rights and opportunities for a pathway to citizenship.  While support for those goals has grown, so has a bitter and transparently racist backlash symbolized by the adoption of draconian anti-immigrant state laws, the rise of the armed Minuteman movement and other racist militias, and Donald Trump’s rise to presumptive Republican Presidential candidate by baiting immigrants and insulting Mexico and all of its peoples—including those who have been American citizens for generations.
But César Chavez’s greatest legacy is the union he left behind and the millions he has inspired.  ¡Si, se puede!

Posted by Patrick Murfin at 4:01 AM