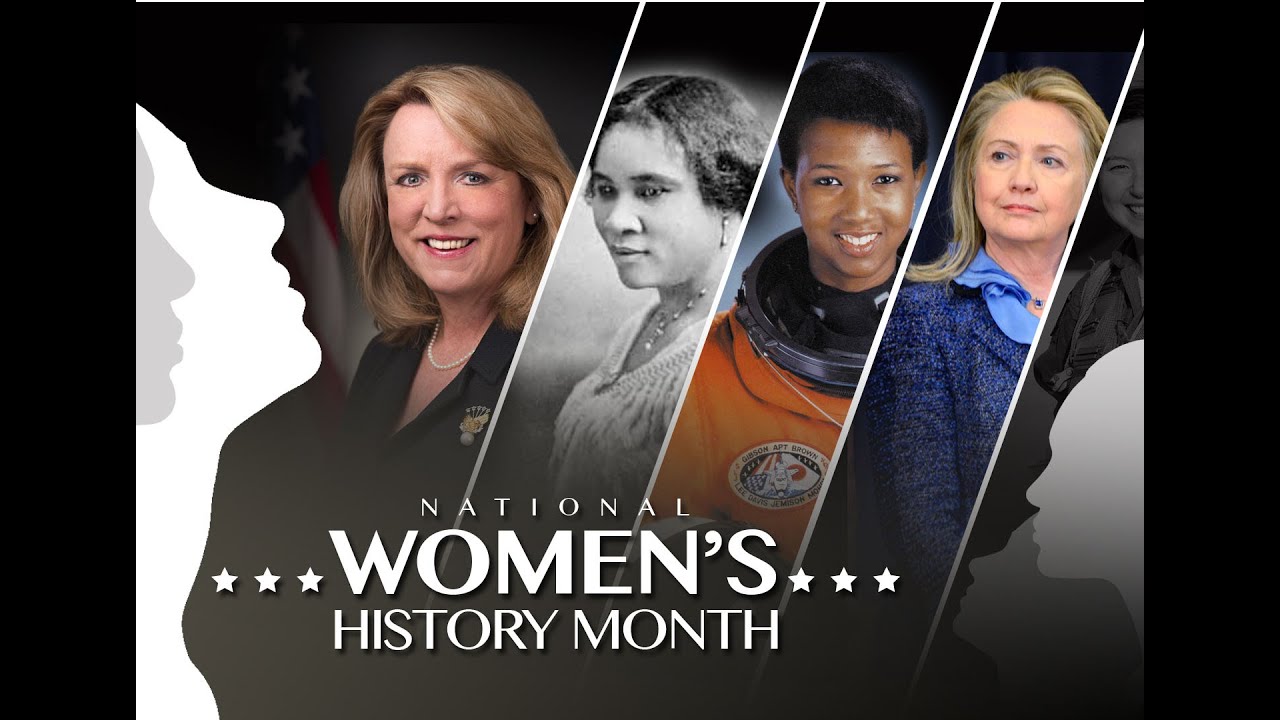 Note—I seem to have woken up channeling a Trump voter…..
Well that was close!  The country just escaped the annual ordeal of Black History Month, even an extra day of it.  There should be an investigation of that.  Clearly a Barack Hussain Obama Muslim Commie Plot to bring this Great Country to its knees.  Not only did we have to endure those smug Black History Minutes on our TVs, but Beyoncé profaned the holy Super Bowl strutting around as a Black Panther!  Imagine glorifying radicals with guns!  Then Chris Rock beat the Hollywood-is-Racist dead horse to death on the Oscars.  Everyone knows Hollywood isn’t racist, they are all damn liberals! At least we got in our licks on the very last day when those very nice Trump sons said they would use their daddy’s money to ship complaining Black entertainers and leaders out of the country.
Now no sooner is that nightmare behind us than we discover the whole damn month of March is supposed to be given over to Women’s History!  Don’t get me wrong, I adore women.  Love ‘em to death!  I always open the door for Ladies and tip my Make America Great cap to them.  My sainted Mother was a woman and my wife—when she is not in one of her moods—is an angel on earth.  But lately it like Satan has taken possession of most of them!  They have forgotten their proper duty as obedient wives and pure daughters waiting to be the vessel of the race.  A lot of the blame goes to this Women’s History Month which has filled their airy heads with ridiculous notions, holding up harpies and nags as heroines, and making examples of women pushing their way into the God-given realms of men.  The whole thing even started with those damn socialists and was pushed by the black helicopter crowd at the United Nations!  Look it up yourself.
I say we put an end to this now!  Let’s declare this White Man’s History Year.  It’s always been that way before.  Let’s make it official.  That’ll shut ‘em all up!
Phew!  That was exhausting and draining.  I can’t keep it up even in the tradition of internet snark.  Let’s play it straight now for a look back at the real origins of Women’s History month.

The loonytoon I was channeling got one thing right—we owe it to trade unionist and members of the Socialist Party in New York City who on February 28, 1909 organized a Women’s Day to celebrate the anniversaries of a garment workers’ strike the year before and a march by women in the needle trades for the 10 hour day back in 1857.  The event was such a success the Socialists made it an annual event and took it national the next year.  In 1911 the Socialist International took it up and spread it across Europe.  After the interruptions of all solidarity movements caused by World War I, the celebrations resumed and spread.  They were also adopted by the new Communist International (Comintern.)
In America, however, the post-war period was marked by a Red Scare and a wave of the greatest repression in U.S. history aimed squarely at Socialists, Communists, anarchists, and militant unionist.  Despite the long fought for victory of women’s suffrage in those same years, the mostly middle class women who had led the struggle did not want to identify their movement with the radicals.  Even as Women’s Day spread globally, its observance here was limited to a kind of labor ghetto.
It took decades to regain a foothold in this country spurred by the new wave of feminism in the ‘60’s and ‘70’s the rise of Women’s Study and History in the colleges and universities.  They got a boost in 1975 when the United Nations officially adopted International Women’s Day on March 8.

First to act were educators at the Sonoma, California school district in 1978 who added a Women’s History Week centered on International Women’s Day the official curriculum.  It mostly centered on age appropriate projects highlight leaders of the suffrage movement.  The press picked up the story and spread it.   Sonoma teachers spread the idea in state and regional conferences and by the next year school districts across the country were adopting or adapting the idea and curriculum.
Sonoma’s Molly Murphy MacGregor brought the idea to a 15 day conference of the Women’s History Institute at Sara Lawrence College in September 1979 organized by Professor Gerda Lerner.  The idea of Women’s History week caught fire and Lerner became a vocal national spokesperson for creating an official national event.


President Jimmy Carter acted quickly.  In February of 1980 he proclaimed National Women’s History Week centered around National Women’s Day on March 8.  His proclamation read:
From the first settlers who came to our shores, from the first American Indian families who befriended them, men and women have worked together to build this nation. Too often the women were unsung and sometimes their contributions went unnoticed. But the achievements, leadership, courage, strength and love of the women who built America was as vital as that of the men whose names we know so well. As Dr. Gerda Lerner has noted, “Women’s History is Women’s Right.” It is an essential and indispensable heritage from which we can draw pride, comfort, courage, and long-range vision. I ask my fellow Americans to recognize this heritage with appropriate activities during National Women’s History Week, March 2–8, 1980. I urge libraries, schools, and community organizations to focus their observances on the leaders who struggled for equality—Susan B. Anthony, Sojourner Truth, Lucy Stone, Lucretia Mott, Elizabeth Cady Stanton, Harriet Tubman, and Alice Paul. Understanding the true history of our country will help us to comprehend the need for full equality under the law for all our people. This goal can be achieved by ratifying the 27th Amendment [Equal Rights Amendment] to the United States Constitution, which states that “Equality of Rights under the Law shall not be denied or abridged by the United States or by any state on account of sex.”
School Districts, municipalities, and states began making proclamations.  Politicians of both political parties were eager to curry favor with the growing women’s movement realizing that women not only made up a majority of the electorate but also actually went to the polls significantly more often than men.  Even Carter’s explicit endorsement of the ERA was not then as partisan an issue as we might now believe.  Republican Party platforms from the 1920’s on had endorsed the ERA.  Many Republican women—and some male politicians—even supported the Roe v. Wade decision and reproductive choice.  In fact middle class suburban white women were a major force in the GOP.
Conservative icon Ronald Reagan was comfortable annually renewing Women’s History Week proclamations.  Republican First Ladies Betty Ford and Barbara Bush were both vocal supporters of the ERA, abortion rights, and other feminist issues.  Although not so vocal during her Born Again Christian husband’s Presidency, Laura Bush was known to hold similar views.
The non-partisan nature of support for women’s issues was illustrated when Utah Senator Orin Hatch and Maryland Democratic Representative Barbara Mikulski co-sponsored the first Joint Congressional Resolution proclaiming a Women’s History Week for March of 1992.
The movement to expand the one week observation into a whole month was taken up by some of the states.  By 1986 14 states had adopted Women’s History Month.  The same year the National Women’s History Project conducted a massive petition campaign to Congress urging to make the Month National.  And they did annually from 1984-94.
By the latter year Congressional Republicans were in full retreat on women’s issues as they became more and more beholden to the Religious Right who opposed   both the ERA and reproductive choice.  From then on Bill Clinton, George W. Bush, and Barack Obama all resumed issuing Presidential proclamations.

In recent years under the influence of the Tea Party  Congressional Republicans have abandoned virtually any semblance of supporting women’s rights and have become actively hostile to the point of prideful and open misogyny while Republicans in control of state legislatures propose ever more bizarre attacks on women.  This year’s Republican Presidential contenders led by the reptilian Trump vie with one another for the crown of greatest war on women soldier.
Meanwhile on the Democratic side the Obama administration initiated the landmark 2011 Women in America: Indicators of Social and Economic Well-Being report and has advanced women’s causes and defended their interests via appointments and executive orders when Congress has blocked action.  The Presidential nomination contest between Hillary Clinton and Senator Bernie Sanders has largely centered on which candidate is best for women, and on if women owe their support to the possible first major party female presidential candidate.  There has been a bitter and divisive split between older women and traditional feminist leaders on one hand and many younger, poorer women on that hot button issue.
Interestingly, the theme of the 2016 National Women’s History Month is, “Working to Form a More Perfect Union: Honoring Women in Public Service and Government.”