No Apologies for Standing With Bernie and Hillary Too

Now a truer picture is emerging.
More reliable polling is now available and although there are variations between the surveys and one widely variant outlier. Pew, perhaps the most highly regarded poll, reported that despite all of the noise, 85% of Sanders supporters will vote for Clinton in November.  Significantly that is higher than the percentage of Clinton who would support Barack Obama after their long, bitter primary battles at a comparable point in 2008.
You may recall there was significant hand wringing at the time about the hold outs costing Obama the election.  It turned out that a lot of the most shrill and public voices were Republican plants and trolls.  By Election Day, virtually all of the holdouts cast votes for Obama.  That may have been because there was no serious alternative to the Democrats in that election. Ralph Nader, running again as an Independent was highly reviled for possibly draining enough votes from Al Gore to tip Florida and the 2000 election to George W. Bush.  He earned only about 750,000 votes nationwide.  The Green Party, which fielded former Representative Cynthia McKenna was not a credible alternative.  McKenna finished dead last behind all of the other minor candidates with only 12% of the total vote.
Sanders will probably have a tougher time, however, earning the most hard core Bernie or Bust votes.  The Hill, a newspaper  for Washington political insiders ran a story citing data and local discussion on Yik Yak, a location-based social network which claimed that 48% of Sanders’s millennials would support a third party and 13% of them even said they would vote for Trump.

The Green Party and its standard bearer Dr. Jill Stein represent a much stronger alternative than it did eight years ago.  Stein has been aggressively angling for Sanders diehards for weeks and the Party has adopted for the first time an explicitly socialist agenda heavy on the economic justice issues dear to Sanders voters.  Her allure was demonstrated when in the first twenty-four hours after the endorsement speech her fundraising jumped a reported 1000%, an accomplishment that was impressive and highly touted.  But it is important to remember that it was 1000% jump from a very low level.  Steins campaign reported taking in $80,000 in that day, still a pittance compared to the fundraising juggernaught of the Clinton campaign or even the comparatively struggling efforts by Donald Trump.
Stein also picked up her first big name former Sanders supporter, Black scholar and public intellectual Cornel West who was the key Sanders representative on the Platform Committee.  She has not, however as yet gotten any defectors with high level elected positions or even the entertainment celebrities that grab attention.
The Green candidate will probably do well with the hard core Sanders cohort this fall who seem in no mood to even consider Clinton who they paint in nearly apocalyptic terms as a liar, criminal, and monster.  But a good chunk of the Bernier or Busters having had their fingers burned by politics may crawl back into the hole of electoral non-involvement from which they were briefly lured.
Clinton’s biggest problem might not be the Sanders people AWOL from the Democrats this fall.  Although she has a devoted base, especially among women and minority voters as well as with long time registered Democrats, Clinton is only getting reluctant and unenthusiastic from many Sanders people.  The same Pew poll that showed he getting most of their votes also showed dissatisfaction among them on her perceived honesty, ability to change Washington, and independence from special interests.  A popular social media meme showing a car with a Sanders bumper sticker and one that reads “Oh, fine, Hillary I guess” summed up the sentiment. 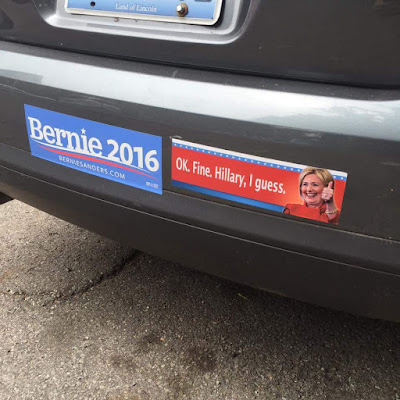 Among critical undecided voters, larger in numbers now than at the same point in 2008, Clinton rivals Trump in unpopularity, largely due to months of relentless smears and lies, old doubts about her honesty, and quite frankly a distaste for a pushy woman.  In that respect despite the Sanders endorsement, it was a tough week for Hillary.  Although the FBI issued a report saying they would not recommend indicting her in the e-mail server scandal, the official making the announcement went out of his way to denounce her for trimming close to the line, and for misrepresentations and lies.  In particular he accused her of sending or receiving classified secrets on her unsecured servers.  That made for spectacular headlines causing her real damage even though the Bureau had to walk that back that none of the e-mails were classified at the time they were sent.
The most recent polls show that Clinton’s several point lead over Trump has melted away.  Polls show her lead down to one to four points in most cases with the widely divergent Rasmussen Poll putting her behind by 7 points.  Aggregating the polls, her lead has shrunk to 43.1% to 41.1% with 11% undecided and 5.9% other.  More alarming one poll showed Trump taking a lead for the first time in critical swing states including Florida, Ohio, and Pennsylvania.
There are nearly gleeful reports of panic in Democratic Party circles.  I strongly doubt it.  There is ample time for recovery, Trump has not run out of ways to shock and offend, and Clinton will have a well financed and well oiled campaign organization that will run rings around Trump’s ego driven, slapdash, chaotic campaign.


The Republican National Convention in Columbus next week will be a literal circus with boundless opportunities for candidate to shoot himself in the foot with his Magnum .44 mouth and for his collection of barely hinged surrogates to lob grenades in all directions.  Trump will waste no opportunity to demean, disparage, and attempt to destroy party regulars who won’t endorse him or who are tepid at best.  Far from unifying the party even a successful—from Trump’s point of view—Convention has the potential to shatter the party.  Don’t expect the usual post convention bounce for Trump
By contrast, Clinton’s Democratic National Convention in Philadelphia will be able to stay pretty clearly on message.  It will not be totally without drama.  There will still be nominations and roll call vote.  Sanders has promised no floor fights over the Platform, but he has less control over his own delegates than any candidate in recent history so some floor pyrotechnics is possible.  But parades of speakers, including Sanders, and the very popular sitting President will paint Clinton in glowing terms.  She will deliver a carefully planned acceptance speech that will hit all of the right notes.  Troops will be rallied rather than alienated and the television audience will surprise themselves by warming to her.  Clinton should be able to sail into August with her lead restored and strengthened.
She will be aided because Trump has his own major minor party threat.  The Libertarian Party is now well established and has been the leading minor party in recent elections.  It strongly appeals to the Randist laissez-faire wing of the party and those uncomfortable with Christian jihadism.  A number of high-powered Republican office holders and media figures have signaled that they intend to vote for Libertarian Gary Johnson.  On the other hand, more anti-Trump Republicans seem ready to swallow hard and vote for Clinton than ex-Sanderistas will vote for Mussolini lite.  Which minority party might do the most damage to which major party will vary from state to state.  Theoretically either could put a close state or two into play, my guess being that the Libertarians might do the most damage.
That’s my two cents as pundit.
As for me, the stakes have never been higher.   Regardless of the jeers of old friends I stand with Bernie Sanders this year in full and enthusiastic support of Hillary Clinton and progressive Democratic candidates from the top to the bottom of the ticket.
The coveted Heretic, Rebel, a Thing to Flout official endorsement goes to Hillary.
The propriety awaits his appointment as an ambassador to a small but pleasant country…

Posted by Patrick Murfin at 3:38 PM