The Flag Flys at the Murfins on the Fourth 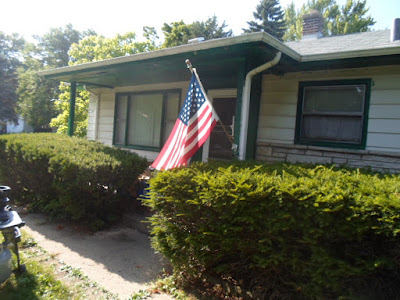 The Stars and Stripes flap from the Murfin house for Independence Day.  In fact most years I put the Flag out for Memorial Day and it stays up until Veterans Day—or if it hasn’t gone to shreds and the weather isn’t too miserable—until Thanksgiving.
A lot of lefties and progressive folk I know are shocked that an old rebel like me, a Wobbly and a Draft resister, a street corner soap-boxer, and habitual protestor, would drape his home in a symbol of oppression.

Howard Zinn summed up their point of view in a widely circulated essay:
On this July 4, we would do well to renounce nationalism and all its symbols: its flags, its pledges of allegiance, its anthems, and its insistence in song that God must single out America to be blessed.
Is not nationalism—that devotion to a flag, an anthem, a boundary so fierce it engenders mass murder—one of the great evils of our time, along with racism, along with religious hatred?
These ways of thinking—cultivated, nurtured, indoctrinated from childhood on—have been useful to those in power and deadly for those out of power.
It is an argument he, and many others, have been making for a long time.  I understand it.  I really do.  I hold no truck with simple nationalism.  I know my history as almost as well as did Professor Zinn.  It is a short jump from jingoism to jackboots.  And I can sing the dark litany of massacre and oppression that has accompanied the twisted notions of American Exceptionalism through the years, as well as any human.
But oppression and blood lust are not just American phenomena.  We have just given it our own peculiar twist.  They are part and parcel of the human condition and exist everywhere.  To paraphrase a hymn beloved by peace folk:

My country’s streams run redder than the cardinal,
And soldiers’ boots tread every hill and vale,
But other lands have bloody streams and carnage.
And soldier’s boots trod everywhere the frail.

(Adapted from This is My Song by Lloyd Stone)
This is not an excuse.  All peoples must come to grips with the particular burdens of their history.  Humanity demands that we all atone for our sins and—much more importantly—strive to prevent their re-occurrence.


But the reason I fly the flag, the reason I could read the Declaration of Independence aloud one year protesting that the McHenry County Peace Group was excluded from the local Independence Day parade with absolutely no intent of irony or condescension, is because there are elements of our common heritage worthy of celebration.  The words of the Declaration, whatever the personal failings of its slave-holding author, still challenge us to be better.
And those words stand not alone.  They stand in a great tradition of utterances and documents, official and insurrectionary, which mark what Abraham Lincoln once called, “the better angles of our nature.”  Tom Paine, James Madison, Ralph Waldo Emerson, Henry David Thoreau, Theodore Parker, Fredrick Douglas, Julia Ward Howe, Susan B. Anthony, Emma Lazarus, Eugene V. Debs, Franklin Roosevelt, Martin Luther King, Cesar Chavez, and hundreds more stand in this tradition.
It is this peculiarly American call for equality and justice, these impossibly lofty goals that lure us onward despite the disappointment and the contradictions, I are what I honor when I put out the flag.
Especially this year when those values are under attack as never before by those who usurp and twist the symbols of our common heritage in the service of oppression.
I REFUSE TO LET THE BASTARDS HAVE IT!