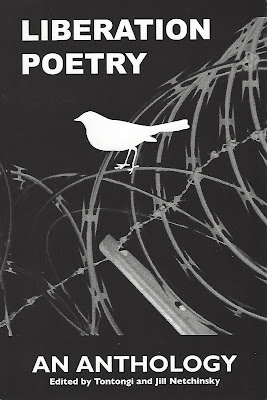 Today I want to sample from the second book my friend Everett Hoagland sent me the other day.  The first, you may recall was Resisting Arrest:  Poems to Stretch the Sky edited by Tony Medina.  Liberation Poetry: An Anthology edited by Tontongi and Jill Nechinsky might have been its older sibling.  Published back in 2011 by Trilingual Press of Cambridge it included some of the same poets including Hoagland and Medina and covers some of the same ground minus the latest blood splatter on the pavement headlines.  Certainly the older book and many of its already veteran contributors inspired the many younger poets in Resisting Arrest.
Liberation Poetry  was the product of an already well establish and self-identified school of poets and spoken word artists—mostly but not exclusively Black and other persons of color of a generation old enough to remember and be influence by the Beat poets but young enough to have been present at birth to early hip hop, slam poetry, and the whole urban performance art scene.  They came of age in the era of Black Empowerment, Black Power, and Black Nationalism and similar movements in Hispanic and other minority communities.
They are of the generation of Amiri Baraka but tip their hats to Walt Whitman, Carl Sandburg, and most of all Langston Hughes.  Music infuses their work—jazz of course but also the protest music of the ‘60’s White and Black including Pete Seeger and early Dylan but also Nina Simone, Gil Scott Heron, and Bob Marley as well at the street corner rap artists who battled their way to cultural significance.
Although several of the contributors had teaching careers, including some that literally knocked down the gates of academia, more are outsider artists than would likely be found in any other anthology of quality poetry.
Together the contributors described their effort this way on their Facebook Page:
This collection, whose introduction emphasizes the importance of a poetics of consciousness, resistance and liberation, celebrates the meaning of poetry in society and its continual relevance as both soul-searching, inspirational medium and agent for fundamental change.
The thirty-six contributing authors encompass a wide spectrum of gender, ethnicity, age, socioeconomic and national backgrounds. Some authors are already well-known, some are emerging.
This anthology is collectively produced and financed under the principle of mutual and collective benefit. The Trilingual Press and the Liberation Poetry Collective are two separate, non commercial, writers’ organizations merging to produce this anthology.
Now for a sampling of the work.

Neil Callender was born in Brooklyn and raised on Long Island.  While a college student in Rhode Island became involved in the anti-apartheid movement, against Campus CIA recruiting, and other causes.  He was an ardent supporter of the Cuban Revolution and became a labor militant in the airline industry.  An active poet since 1994, he earned an MFA in Poetry Writing at Vermont College and taught at Roxbury Community College in Massachusetts.
All Glories
Slavery and Sherman and the Seminoles—the story
been sung long in the lo country, the blood done dried,
the bones been buried, dug up and reburied, built over.
But the spirits have their say anyway.

Pour swamp water libation for the Egungun,
leave butter cake in sweetgrass baskets for
the Ancestors.

For those who perished in the barracoons
and pest houses, who hanged with Denmark,
joined up with Higginson’s Volunteers,
for the enraged mothers who poisoned
their son-stealing masters, burned down
the houses of daughter-raping masters,
All glories to the Egungun.

Martin Espada is another Brooklyn native born in 1957.  A former tenant lawyer, he had a productive career as poet publishing 16 books including Alabanza: New and Select Poems, The Republic of Poetry, and Crycufixion in the Plaza de Armas.  He was the recipient of a Guggenheim Fellowship and the National Hispanic Cultural Center Literary Award. He is an English professor at the University of Massachusetts-Amherst.

The lover of a subversive
is also a subversive.
The painter’s compañero was a conspirator,
revolutionary convicted
to haunt the catacombs of federal prison
for the next half century.
When she painted her canvas
on the beach, the FBI man
squatted behind her
on the sand, muddying his dark gray suit
and kissing his walkie-talkie,
a pallbearer who missed
the funeral train.

The painter who paints a subversive
is also a subversive.
In her portrait of him, she imagines
his long black twist of hair. In her portraits
of herself, she wears a mask
or has no mouth.  She must sell the canvases,
for the FBI man lectured solemnly
to the principal at the school
where she once taught.

The woman who grieves for a subversive
is also a subversive.
The FBI man is a pale-skinned apparition
staring in the market.
She could reach for him
and only touch a pillar of ash
where the dark gray suit had been.
If she huger to touch her lover,
she must brush her fingers
on moist canvas.

The lover of a subversive
is also a subversive.
When the beach chilled cold,
and the bright stumble of tourists
deserted, she and the FBI man
were left along with their spying glances,
as he waited calmly
for the sobbing to begin,
and she refused to sob.

As noted, Tony Medina went on to edit Resisting Arrest.  He was born in the Bronx and lives in Harlem.  A prolific writer, his poetry, fiction, and essays have appeared in more than a score of anthologies and he has written more than a dozen books including poetry in Sermons From the Smell of a Carcass Condemned to Begging, Poets Against the Killing Fields, and My Old Man Was Always On the Lam and several acclaimed books for youth and Children.  He has taught creative writing at a number of colleges.

How to Become a United States Citizen

·       Place a TV on your altar
·       Wallpaper the cross on your rosary with dollars
·       Sing The Star Spangled Banner while rinsing with Scope or Listerine
·       Paint each and every individual one of your pubic hairs red white and blue (in the order)
·       Bang your head against an ATM door for the stars
·       Shoplift a loaf of day-old bread for stripes
·       Watch The Brady Bunch for the rest of your life, chanting: Uh my nose! Uh my nose! Uh my nose! Uh my nose! Or Marcia-Marcia-Marcia!
·       Eat at McDonald’s three times a week
·       Name your first born John Wayne or Elvis, even if it’s a boy
·       Have respect for sailors
·       Memorize the names: the Nina, the Pinta, the Santa Maria
·       Snort decaf at shopping malls
·       Soak your feet in cappuccino
·       Give your corns and bunions electric shock treatment
·       Show up as “Whites Only surprise parties thrown in Tennessee by the FBI
·       Impersonate J. Edgar Hoover impersonating Barbara Bus
·       Place your right hand on the Bible and repeat these immortal words of Justice Clarence Thomas:  Hey, who put pubic hairs on my Coke?
·       Lip synch the entire soundtrack to Shaft
·       Perform all the stunt scenes of the house negroes in DW Griffith’s Birth of a Nation
·       Send a bottle of E&J or OE to every Indian reservation still standing
·       Hang a picture of Hitler in your living room next to the one of Jesus, the Pope, and the most recent President
·       Purchase a copy of Newt Gingrich’s book To Re-Write America, and read it as if it were the new Gideon’s Bible
·       Repeat the only line from that old capitalist spiritual:  Onga boonga/Onga boonga until you get sick, swallow your tongue, or die of lethargy
·       Sell your daughter to US troops for a VCR and Polka lessons
·       Believe everything they tell you in school and everything you see on TV.


Finally, Askia M. Touré is one of the most senior and distinguished of the represented poets.  He is the acknowledged founder and leading light of the Black Arts Movement which has been described as “America’s largest cultural/literary movement.”  He was born Robert Snellings in 1938 in Raleigh, North Carolina.  After a stint in the Air Force he studied at the Dayton Art Institute before moving to the Big Apple to join the Art Student’s League and Umbra Poets.  There he began a career that seamlessly mixed poetry, illustration, and cultural and political activism.  The Umbra Poets and their journal provided the nucleolus for the literary side of the Black Arts Movement beginning in 1962.  He was on the Atlanta staff of the Student Nonviolent Coordinating Committee (SNCC) and joined the Revolutionary Action Movement (RAM) in1964.[ In 1965, he founded Afro World and organized the Harlem Uptown Youth Conference. He was involved in the Black Panther Party and helped write SNCC's 1966 Black Power Position Paper. In 1967, he joined the faculty at San Francisco State University with Nathan Hare, Sonia Sanchez, and Amiri Baraka where he taught African history in the first African Studies Program. He helped found the Atlanta chapter of the Association for the Study of Classical African Civilizations.  His poetry collections include Juju: Magic Songs for the Black Nation, From the Pyramids to the Projects: Poems of Genocide & Resistance!, and African Affirmations: Songs for Patriots: New Poems, 1994 to 2004. For this work Touré has been award a 1989 American Book Award and was presented with the 1996 Gwendolyn Brooks Lifetime Achievement Award from the Gwendolyn Brooks Institute.
Legacies: A Redemption Song/1
How will they see us, these  coming generations?
Will they grasp the subtleties of this marathon,
this Long War?  How has the “Slave” race
survived our great Holocaust: and what is the
transformative level, spiritually, from slave-songs
to the renowned complexities of “Jazz”?
From Nat Turner to Duke Ellington, from Ellington
to Miles, and beyond, to ‘Trane, Pharaoh, Sun Ra,
and the vast Cosmos.  An upsurge of legendary
Masters creating a whole Atmosphere, a living
Tradition: at once hip, holistic, visionary, spiritual:
a diving act of “Seeing” into the very depth
of being fully human: grasping the Zen-like
phenomena of mature improvisation, creating
a rhythmic, dialectical Universe, an Empire
of Sound against Cosmic Silence, entering
the Void…What we’re describing is the hidden
soul of a people, Its inner language, Will
expressed sonically, a living Magic, if you will,
which creates a Godly consciousness,
embodies a Nation of Shamans—Guerilla Maroons—
to stand against the rape of Paradise by
legions of assassins and imperialist wolves.

Liberation Poetry: An Anthology can be ordered from Trilingual Press