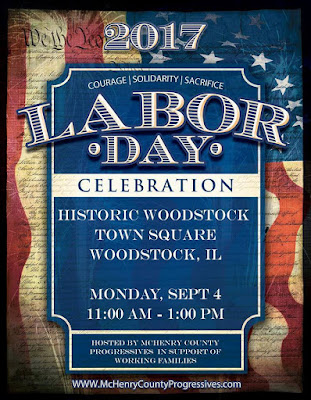 The third annual Labor Day Celebration on historic Woodstock Square returns on Monday September 4 from 11 to 2 pm.  The event celebrates the courage, solidarity, and sacrifice of the American labor movement.
“If Charlottesville taught us nothing else, it is that when we stand together, we are stronger. This is why we are extending this invitation to all activists across the area,” the official invitation says, “Be there for unions, be there for working families and help each other in the process, for the workers on strike, for our teachers fighting against privatization, for the dignity of a fair wage…This is Labor Day as it was intended, be there.”
The event acknowledges Woodstock’s own historic connection to labor history as the place where railway union leader Eugene V. Debs was held in jail after the 1893 Pullman Strike and where the citizens and workers of McHenry County carried him triumphantly on their shoulders to the train depot after his release.  Debs’s message of solidarity continues to inspire working people today.
The event is put together by volunteer activists and is sponsored by McHenry County Progressives and Illinois Indivisible 14.

This year featured speakers will include Jim Walz, a Democratic Candidate for Congress from the 14th District;  activist and blogger at Gold Pin Independent Nancy Zettler; Carlos Acosta, long time McHenry County Latino leader and member of AFSME 2833; Bob Paddock of the International Union of Operating Engineers Local 150; and master story teller Jim May.  Keith Johnson and friends from Off Square Music will provide music.

Taking up hosting duties this year will be Patrick Murfin, a former leader of the Industrial Workers of the World, labor historian, blogger, and longtime McHenry County social justice activist.  He previously organized and hosted the Diversity Day Festival that ran on the Square for 13 years.
For more information contact Murfin at 815 814-5645 or pmurfin@sbcglobal.net or see the Facebook event invitation.
Posted by Patrick Murfin at 2:00 AM