The Right to Be an Asshole Revisited in Light of Charlottesville


Note—I still have one last thing to deal with after my musings about the events in Charlottesville—revisiting my highly unpopular First Amendment absolutism.  I tackled this topic before and got reamed.  I guarantee it will be worse this time even though I have refined and modified some of my thinking.  Here is a post based one from way back in 2012 and adapted for present reality and my evolved opinion.
Every writer, whether he wishes to admit it or not, occasionally commits a turn of phrase that seems to him so perfect that he just has to stand back and admire it. I came up with one of my personal such favorites more than thirty years ago in a letter describing a particularly obstreperous fellow worker: “He’s such a flaming asshole that he can’t sit down without igniting the furniture.” Not Shakespeare perhaps, but certainly a classic insult. The events in Charlottesville and the reaction to it are just the most recent things that have brought this back to mind.
There are certainly no greater flaming assholes than the collection of knuckle dragging turds, neo-Nazis, Klansmen, White Nationalists, and Alt-right prep boys who organized the Unite the Right events in Charlottesville.  The gathering was ostensibly to protest the planned removal of a monument to Robert E. Lee which they said was an attack on their heritage.  The rally and the inflammatory speeches that would be given there, and the display of Confederate Battle Flags, Nazi and fascist banners and emblems, and Ku Klux Klan regalia was also painted as an expression of their First Amendment Rights to freedom of speech and assembly which they claimed were under attack by a liberal/communist/Jewish conspiracy.
Naturally there were calls for the City to deny permits for hate speech and ban the demonstrations, especially communities who were not only the targets of the expected hate speech but had historically suffered violence and oppression at the hands of those who followed the same ideologies and symbols—Blacks, Jews, immigrants, and the LGBT community.
The city understood that the assembly and speech, as dangerous and offensive was it was protected under the First Amendment to the Constitution.  It was well settled law that expression, especially political speech, cannot be used as the basis for denying permits.  But there seemed to be precedent for placing certain restriction on protest gatherings in the interest of public safety.  On that basis the city denied a permit to gather at the small Emancipation Park—formerly Robert E. Lee Park—and instead offered space in a much larger city park just a few blocks away where the Unite the Right Rally could also be physically separated from the thousands of counter demonstrators expected.  Many, including the local press, business community, and traditional civil rights organizations, thought that this was both sensible and reasonable.
It is true that such restrictions have become common.  It is also true that the left has been far more frequently the target of them than even the most menacing and often armed displays of than the right.  Think of the so-called caged free-speech zones now routinely set up blocks from national political party conventions, campaign events, appearances by the President, and major international gatherings economic and summit gatherings.  On the other hand abortion clinic patients and staff have been sheltered from aggressive anti-abortion protestors by safety or protective zones that allow clear access to the facilities.

The American Civil Liberties Union (ACLU) has always opposed those restrictions regardless of content of the speech or the politics of the protestors.  So it was no surprise that they took the case of Unite the Right and challenged the city’s refusal to issue permits for Emancipation Park.  They argued that their client’s rights were violated because the statue in the park was the issue they were addressing.  The court agreed and issued a late, emergency order to the city to grant use of Emancipation Park.
The ACLU was promptly on everybody’s shit list and denounced in often heated terms by the city, press, and irate anti-racists.  There were some noisy and high profile membership resignations and fundraising boycotts were being organized on social media in the blink of an eye.  ACLU lawyers and officers were harassed and received death threats.  But then everyone gets death threats these days for saying anything more controversial than good morning.  It’s the American way circa 2017.
Of course just months ago the ACLU was the darling of the same pack of dogs now snapping at their heels.  When the Cheeto in Charge came to power the ACLU was everywhere pissing on dozens of constitutional arson fires set by the feckless President.  In short order they blocked every attempt to instate his Muslim ban, protected immigrants, staved off attacks on LGBT rights, parried assaults on voting rights to name just a few examples.  Folks were so grateful than in the early months of the new administration the ACLU racked up tens of thousands of new members and unexpected millions of dollars in financial contributions.

It should have come as no surprise, however.  The ACLU shed members like a mangy dog’s fur when they helped the Illinois Nazis obtain a permit to march in the Chicago suburb of Skokie, a heavily Jewish community with many Holocaust survivors back in 1977.  They have always taken cases regardless of the content of the speech under attack including case involving such despicable outfits as the Klan and the violent anti-abortion group Operation Rescue.
Of course the reality on the street was that a violent confrontation between the White Nationalists and their opponents was inevitable.  Could it have been limited if the two sides were pent up and separated by ranks of militarized police with shield, batons, gas, and rubber bullets?  Perhaps.  Or the situation could have degenerated into a three way brawl.  But it was a done deal when authorities closed the park after scuffling broke out and forced both sides into the streets and then stood back and let them go at it.
Heather Heyer’s death cannot be laid, as one left wing critic wrote, “laid on the altar of free speech fetishism” nor was the ACLU her assassin.
The violence in Charlottesville was not the only recent example of folks on one side or another of our great political, moral, and ethical divide trying to shut down the speech of their foes.  Without elaboration the list includes:
·         Campus groups demanding the firing of professors, banning of speakers, banning other campus organization, or censoring student publication—by both sides.
·           Moves in Congress and several state legislatures to actually criminalize advocacy for a boycott of Israeli businesses and products as inherently anti-Semitic
·           Moves in several state legislatures to make blocking highways—a common protest method of the Black Lives Matter movement—a felony and giving legal protection to drivers who ram protestors.
·        So-called Religious Freedom laws that give an out to businesses and even individual public officials who refuse to serve Gays, lesbians, and transgender folk or even those who advocate for them.
·     Gag  orders with heavy penalties for public officials who speak out about the Trump administration’s dismantling of environmental, health, and safety regulation and the stripping of science information from government web sites and publications.
·          Nearly continuous demands to block or ban social network content for an ever growing laundry list of reasons.
And that only scratches the surface. 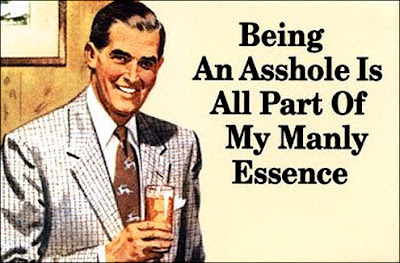 After much consideration, I have to come down on the side of the god-given right to be an asshole.

Everyone is somebody else’s asshole—at least everyone with the requisite combination of strong opinions and backbone. That means that there is always someone out there that yearns to shut us up and someone we want to muzzle in turn. In my case small armies would like to slap the gag on me. There was the sputtering “Let’s turn Iraq to a sea of glass” guy who denounced my namby-pamby treason at an anti-war vigil a few years ago. There are the anonymous phone callers every time I wrote a letter to the editor in support of marriage equality. There are the proper Catholic ladies who hissed “baby killer” at me when I used to work at the Democratic Party booth at the County Fair. Any vague mention of gun violence most reliably resulted in threats to me and my family.  My support of Black Lives Matter sends internet trolls into ferocious rages.  I could go on, but you get the picture. Almost any one of these folks would be overjoyed to have the government arrange for either my silence or disappearance.
I, of course, have my own list of knuckle dragging buffoons, crackpots, and hate spewing bigots who I am sure need the deft application of a dirty gym sock shoved far down offending throats.

In the end my cherished right to be obnoxious to some folk depends on having to put up with the offensive speech of others. I do not trust any government to make a call on what is permitted or not. In this sense I am a First Amendment absolutist in this country and fervent defender of free speech everywhere in the globe.
But that does not mean any asshole has to be “tolerated” in the sense of being allowed to proceed unchallenged or outrage unchecked by public. The best part of free speech is our to his absolute right to call an asshole an asshole to his face and hold him up to ridicule and scorn. The truism is that the best weapon against a bad idea is a better one.

We have seen this in action in the literally thousands of vigils and marches that spontaneously arose after the Charlottesville spectacle.  The planned Klan rally in Boston was a prime example.  Neither the City or State tried to shut it down, nor indeed authorities were bound to protect the rights of the racists.  But 40,000 took to the streets to oppose them, dwarfing the few dozen who showed up, keeping most of the self-proclaimed leaders away, and ending the event hours earlier.  Our side’s free speech, our people power, was more effective than any official action.  And in the aftermath 35 planned hate events in other cities were canceled by their sponsors.
But even the ACLU had second thoughts after Charlottesville.  They were especially responsive to complaints by members and supporters that they had enabled the hate groups to menace counter demonstrators with semi-automatic military style weapons.  That was a more than implied threat of lethal violence.  Last week the group’s executive director announced that the ACLU would no longer represent groups who planned to deploy arms in their demonstrations.  Free speech does not protect that kind of physical threat, especially a threat used to stifle the speech of others. The ACLU made a wise call without undermining their most solid traditional commitments to Constitutional liberty.  And I completely concur.

Meanwhile I’ll continue to resist attempts by the government to pick and choose speech that it approves of.  History has taught me that my ox is more likely to be gored by that than the other guy’s.  But don’t be shocked if I someday punch a Nazi.
Posted by Patrick Murfin at 8:40 AM