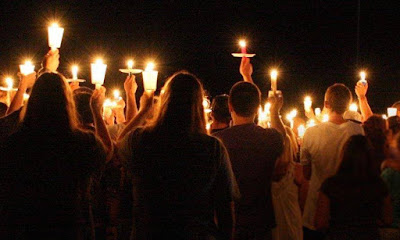 A Prayer Vigil in support of immigrants detained at McHenry County Jail and threatened Dreamers will be held at Bates Park, 1500 North Seminary Avenue in Woodstock this Sunday evening, October 22 from 7 to 8 pm.
The public witness is in response to two events that have highlighted the distress of immigrant families.
In September Sheriff Bill Prim refused to accept bail for an undocumented immigrant, Niceforo Macedo-Hernandez, and detained him for U.S. Immigration and Customs Enforcement (ICE) in defiance to the newly enacted Illinois Trust Act which forbids local law enforcement agencies from detaining someone solely because of their immigration status.  ICE whisked Macedo-Hernandez to an out of state facility before a court challenge to the Sheriff’s action could be heard.  Prim cited the County Jail’s contract as Immigrant Detention Center as justification for his action and has since continued to refuse bail as required by Illinois law.
Shortly after President Donald Trump issued an executive order reversing the protection to Dreamers under the Deferred Action for Childhood Arrival (DACA) program for young people brought to the United States as children who have made lives here and are pursuing an education, career, or who are even serving in the military.  Although the order has been challenged in court and the President has indicated he would support Congressional action to protect the Dreamers in exchange for a laundry-list of strict and punitive immigration “reforms”, the future of countless young people has been thrown into question.  Arrests and deportation proceedings have already begun including targeting of public spokes persons for the Dreamers.

The Sunday vigil was organized by concerned members of the community including Carlos Acosta, former leader of the McHenry County Latino Coalition and a Democratic candidate for County Board; Janie Galarza, the Latino Program Coordinator for the domestic violence agency Turning Point; and Pam Shearman of the Interfaith Committee on Detained Immigrants (ICDI) who oversees the Jail Ministry at the McHenry County Jail ICE Detention unit.  Community supporters include the Social Justice Team of the Tree of Life Unitarian Universalist Congregation.

Lou Ness, a long time McHenry County activist, an ordained Deacon in the Episcopal Church, and a police chaplain will officiate.  Participants are asked to bring candles or flashlights but no signs for this solemn event.
For further information visit the Facebook event page Interfaith Prayer Vigil.

Posted by Patrick Murfin at 6:29 AM