Treading Where Perhaps No Man Should and Murfin Verse 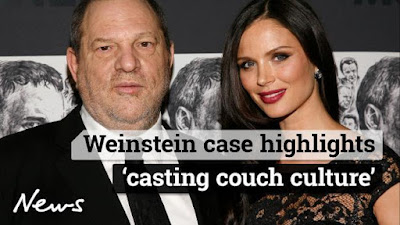 Floundering Puerto Rico, California ablaze, the latest cruelties and crudities of the Oaf-in-Chief, Constitutional crisis du jour all be damned.  The headlines of the week and the focus of countless hours of broadcast and cable babble have come from the graceless downfall of Hollywood super predator Harvey Weinstein and the subsequent fallout.  Neither the rapt attention paid to the story nor the lurid details themselves should have been no surprise.  After all it had all of the elements—a famous name of great accomplishment, glitz and glamour, wealth and privilege, and famous, fabulous victims.
In many ways it came as no surprise at all.  The casting couch is a cliché as old as the theater and a long assumed common practice in the motion picture industries.  Abusive and lecherous power figures in Hollywood lore have stretched from the ridiculous—Fatty Arbuckle—to Howard Hughes, more than one legendary Golden Age of Movies studio Czar, to the middle age director caught sticking his tongue down the throat of the still teenage star of the Twilight franchise.  Great stars from Gloria Swanson to Joan Crawford and Barbara Stanwyck to Marilyn Monroe boosted their early careers by being compliant.  A few stars like Shelley Winters have even been open about it in their memoirs.
One would think that given the open secret of Hollywood sexual exploitation that the Weinstein story would make a splash and sell a lot of supermarket tabloids and slick entertainment magazines and then fade quickly as the public’s fickle attention was diverted elsewhere.
But it became a story that would not go away and which has taken a life of its own with far deeper than usual social consequences.  Perhaps because of a parade of other famous predators including the once beloved Bill Cosby.  Perhaps because we suffer under the reign and misrule of an open and notorious pussy grabber.  Perhaps because it came hard on the heels of the death of Playboy founder Hugh Heffner whose passing set off a national debate on his role in popularizing sexual exploitation.  But I suspect it was the sheer volume of women who stepped forward with their own tales of abuse. 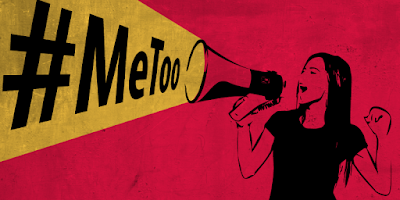 Somewhere along the line that triggered the Twitter #MeToo which rapidly spread to Facebook and other social media.  Women of all ages, races, social classes, professions, and sexual orientation came forward to testify that, yes, they too were victims of sexual harassment, exploitation, assault, and rape.  Many did so by simply sharing the hashtag.  Others tore the scabs off of old wounds and told deeply personal stories.  Day by day the hashtags grew, seeming to take over social media platform.  Wednesday morning Facebook alone reported 4.7 million posts using #MeToo.
Tuesday I was stunned to see a never ending parade of dear friends, family members, college friends, former work associates, ministers, writers, and colleagues in social justice struggle, women I deeply admire and respect.  I created my own simple hashtag—#NearlyEveryWomanIKnow.  It didn’t exactly go viral, but it did set off a long string of reaction and commentary.  Some of that commentary chastised me at my naiveté for being surprised.
A male friend jumped in to remind the thread that men, too could be victims of abuse and harassment which set off further discussion of the phenomena that so resembles the insistence that all lives matter when confronted by Black Lives Mater.  While acknowledging that such abuse was both possible and deplorable women in the discussion were unanimous in resenting a male attempt to co-opt the discussion and divert their outrage.  He responded with a graduate level seminar of defensive justification and classic mansplaining.
The response of men to all of this cultural brouhaha was telling.  Most ignored the whole thing and I suspect a lot were hunkering down waiting for the hurricane to blow over.  Others, like my friend on the thread I started tried in one way or another to include men as victims of abuse.  In some threads this was welcomed or allowed by women, especially if the claimed trauma was a result of childhood abuse or in retaliation for gay or transgender identification.  Other women fiercely objected to any diversion from the issue of systematic patriarchal domination.
Given my self-selected friends I personally saw none of the vitriolic attacks and did not experience the vicious reaction and threats that many women faced for claiming their own experience publicly.  But I saw examples posted by others and know that there is a lot of hate and misogyny out there, some of it systematically organized and encouraged.  In the face of that reaction it took real courage for women to continue to speak out.
All of these testosterone driven responses gave me pause to examine my own life and relationships.  I can honestly say that I never committed assault or coercion.  Before I become too smug and self-congratulatory, however, I have to dig deeper and examine some dark corners of my own soul.
I have written in memoir pieces how despite me being otherwise in the thick of the radical counter culture of the ‘60’s and ‘70’s that I somehow missed the sexual revolution.  Not that I never had a relationship, although I was a “late bloomer” but that my peculiar combination of awkward nerdiness, deep shyness with women, and a paralyzing fear of rejection, I completely missed the Free Love and love-the-one-you’re-with attitude that I saw all around me at college and in the hip street scene of Chicago.  Was my supposed good behavior a result not of innate nobility, but my fear of “manning up” and asserting what I probably felt was entitled to me?  It seems logical and likely.
Also, I was never in a position of formal power over the women in my life.  I was never a teacher, never a boss.  I worked for some women but never commanded any.  Women were my cohorts at work and my collaborators in social justice work.  I had no gifts to bestow, fame to offer, or the power to harm their advancement.  Perhaps given any of those advantages, I would have succumbed to the temptation to leverage them.  Perhaps my virtue was never challenged.

And then, of course, there are all of the so-called lesser things.  I may not have been a felon, but surely I have been a petty criminal with a rap sheet of sexual misdemeanors.  Like Jimmy Carter, I have lusted in my heart almost compulsively.  I have ogled and leered, told off color jokes, the whole panoply of male jerkiness 101.  I once broke up a sexual assault on a Chicago street, but that was simply fueled by adrenaline and the juvenile hero fantasies that played out in the movie in my mind.  More telling and shameful, I have remained silent about the misbehavior and abuse of friends and co-workers failing tests of cowardice repeatedly.
I want to be a better man, strike that, a better human being.  But so far I have failed to be what I pretend to be—a good guy.  I will try.  Maybe I will get better.  Likely I will fail again.
A year ago about this time despite these weaknesses—or perhaps empowered by them, I addressed uproar over Donald Grab ‘em by the pussy Trump in a poem.  Perhaps it has some relevance today… 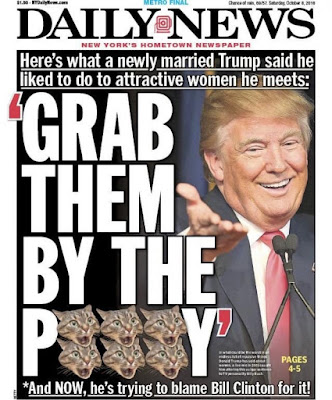 Ok, so I’m a stranger to locker rooms.
I was the furthest thing from a jock,
a pasty flabby kid with glasses
and a paperback perpetually
stuffed in his back pocket.
In rancid and sweaty after-gym class
dodging the snapped towels
and hoots at my terror shriveled wanger,
I recall no chatting about grabbing pussy
or sticking lounges down startled throats.
But hell, it was a long time ago,
perhaps the memory is hazy
or perhaps I lacked the passport
to the elite spaces of strutting stars
where such things maybe were lingua franca.

But I was an accredited correspondent
to the sexual revolution
even if a failed participant
and remember free love and hippy chicks.
I did doctorial research in scurvy dives
with the 7 am eye-opener drunks
and the reek of stale beer, vomit, and Pall Malls
and snickered along with some dirty jokes
and ogled the unattainable babes on the
beer calendars and TV shows
flickering in the high corner above the cooler.
I have spent my hours with men
on oily shop floors where machines
whirred, roared, and clanked
and you counted your fingers
to make sure they were attached
and we ate lunch off the roach coach
brushing crumbs from our aprons
and spun foolish yarns and lies.
I have languished in the Joint
where a commissary Hustler
was worth a carton of squares
and drifted to sleep on lumpy cots
to the moans of cons pulling their puds,
my hand in unison with the rest.
I have been in the company of men
where civilizing women were
nowhere around to shame or constrain us.

I may be a pig and a loser, Mr. Trump,
but I have never disgraced all swine
or turned winner into an epithet

This poem was included in my homemade chapbook Resistance Verse which I created last March in conjunction with the  Poets in Resistance reading at the Tree of Life Unitarian Universalist Congregation in McHenry, Illinois.  If you are interested, I can mail a copy for $4 including postage or send you a pdf version for free.  Just e-mail your contact information to pmurfin@sbcglobal.net, message me on Facebook, or mail to 522 W. Terra Cotta Avenue, Crystal Lake, IL 60016.