Frosty the Snowman by Ella Fitzgerald.


Frosty the Snowman, today’s entry into our Holidays Music Festival, touches several seasonal sub-genres—Winter songs not actually holiday related, children’s songs, and in this version by the inimitable Ella Fitzgerald, jazz.
The tune about a plucky snowman who comes to life when crowned with an old top hat was written by Walter “Jack” Rollins and Steve Nelson on a hot summer day in the Westchester County suburbs of New York.  The composers said that it was set in Armonk near White Plains which had the village green mentioned in the song.
Rollins had already written Here Comes Peter Cotton Tail as an Easter specialty for Gene Autry and knew that the country crooner was looking for a follow up to his enormously popular 1949 hit Rudolph the Red-Nosed Reindeer.  Autry, ever a shrewd businessman, recognized that holiday and children’s songs could produce a lucrative perennial income as his movie career was winding down.  As anticipated Frosty became yet another huge hit in 1950.  He would go on to record other Christmas favorites including Santa Claus is Coming to Town and his own composition Here Comes Santa Claus.
But although released for Christmas sales, the song never mentioned the holiday.
But Autry was not the only one to hit it big with the spritely tune in 1950.  Jimmy Durante, Nat King Cole, and Guy Lombardo all charted that year. 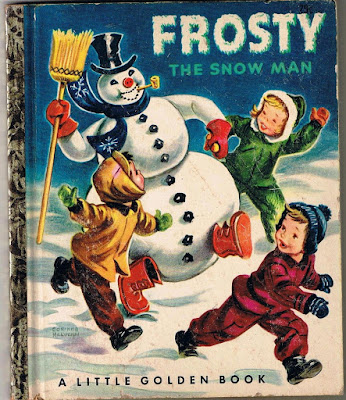 The song’s appeal and popularity immediately sparked adaptations in other media.  Little Golden Books came out with their drug store rack book that ended up in many Christmas stockings.  Also in In 1950, the UPA studio brought Frosty to life in a three-minute animated short for Chicago’s WGN-TV with a bouncy, jazzy a cappella version of the song and a limited animation style reminiscent of UPA’s popular Gerald McBoing-Boing. The black and white short became a perennial Christmas favorite on the station and is broadcast annually along with their two other Christmas shorts Suzy Snowflake and Hardrock, Coco and Joe every year since.

But the 1969 Rankin/Bass color animated CBS special, blew all other interpretations out of the water and became, like the studio’s Rudolph the Red-Nosed Reindeer.  This version for the first time inserted Christmas and Santa into the story line and altered the original lyrics reprised by Jimmy Durante from “he’ll come back again someday” to “he’ll be back on Christmas Day.”  Rankin/Bass used cell animation out-sourced to Japan’s Mushi Production studio instead of the stop-action animation used in Rudolph.  It featured the voices of Durante as the narrator, Billy De Wolfe as Professor Hinkle, Jackie Vernon,  Paul Frees as Santa and June Foray as Karen.

The popularity of the Rankin/Bass special and its three sequels means that the plethora of Frosty merchandise in stores every holiday season is based on its imagery.

Ella Fitzgerald—one of the few women to be included with the likes of Autry, Bing Crosby, Perry Como, Nat King Cole, Andy Williams, and Johnny Mathis in the pantheon of Christmas music all-stars—recorded her version in 1960 for her album Ella Wishes You a Swinging Christmas for Verve Records featuring a studio orchestra arranged and conducted by Frank DeVol.  It was one of several original Christmas albums released by her and her version of the song has appeared in countless re-packages and other compilations.
Posted by Patrick Murfin at 9:02 AM