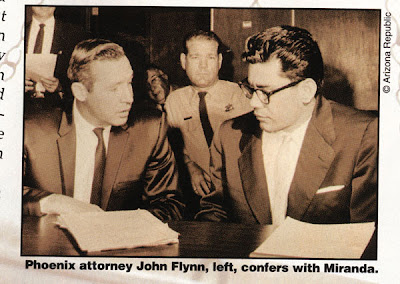 It still drives ‘em crazy after all these years.  On March 18, 1966 the United States Supreme Court handed down the ruling that required prisoners in custody be advised of their right to remain silent until they see a lawyer—the Miranda Warning.
It was a bitterly divided 5-4 split decision in the case of Miranda vs. Arizona.  Ernesto Martinez Miranda, a career petty criminal, was arrested in 1963 by Phoenix police on a robbery charge.  While being interrogated in custody, he confessed to a rape.  He was convicted and sentenced to a long prison sentence, despite the objection by his lawyer that he had never been advised of his Fifth Amendment right to remain silent.
The Arizona Supreme Court upheld the conviction on the grounds that Miranda never specifically requested an attorney to advise him of his rights and that the government had no duty to do so.  Chief Justice Earl Warren, a former prosecutor, wrote the opinion that not only overturned Miranda’s conviction, but outlined dramatic new procedures for police integrations and made it clear that confessions obtained without following proper procedures would be “tainted fruit of a forbidden tree” and could not be used in evidence.
Dissenting justices worried that all suspects would immediately clam up and that all lawyers would advise their clients to keep quiet.
It turns out, however, that a lot of criminals just can’t stop themselves from babbling to police and a lot of lawyers advise their clients to confess in exchange for a plea bargain.
After the decision, cops were issued little cards with the required verbiage to cut the court’s mustard.  They would pull it out and read:
You have the right to remain silent. Anything you say can and will be used against you in a court of law. You have the right to be speak to an attorney, and to have an attorney present during any questioning. If you cannot afford a lawyer, one will be provided for you at government expense.
Although police were originally outraged, the ritual of “reading ‘em their rights” soon became second nature.  These days few cops need those little cards.  They can easily rattle of the language just as they are reaching for the cuffs.
Cases do occasionally get thrown out when the procedures are not properly followed, but probably no more frequently than for other police misconduct like inappropriate searches.
Still, complaints that the courts are soft on crime have been a staple of the right wing ever since.  Controversies over whether to try terrorism suspects in civilian courts often center on claims that “Mirandaizing” them will somehow endanger the national security by interfering with intelligence gathering.  Of course, the same objectors are also enthusiasts for the Spanish Inquisition style of interrogation.
Posted by Patrick Murfin at 6:35 AM