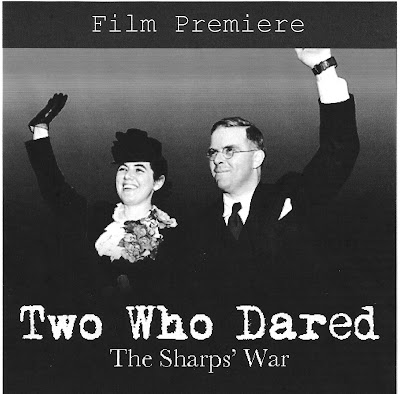 On Saturday, April 6 at 7 pm the Unitarian Universalist Congregation in McHenry (Tree of Life), 5603 Bull Valley Road in McHenry, will join dozens of other venues around the world in premiering Two Who Dared: The Sharps’ War, a documentary about courage and sacrifice by a young couple fighting to save Jews and other potential victims of the Nazis at the onset of World War II.

After seventeen ministers declined the American Unitarian Association’s request for relief volunteers in Europe, the Rev. Waitstill Sharp and his wife Martha committed to the dangerous undertaking. They left their two young children in Wellesley, Massachusetts and traveled to Czechoslovakia. In order to enable the clandestine transportation of refugees, they battled political and social blockades, broke laws to get imperiled individuals exit visas and laundered money on the black market. Over the course of two missions—Prague in 1939 and Southern France in 1940, the Sharps, and their underground confederates played a vital role in saving thousands from persecution.

The letters of transit which were the McGuffin in the film Casablanca did not really exist, but those were the kind of documents that the Sharps begged, borrowed, stole, or forged at great risk to help refugees escape war torn Europe.

Because of their actions to save Jews, the Sharps were named Righteous Among the Nations by Yad Vashem, Israel’s Holocaust memorial and museum. They are two of only three Americans to be so honored. The official premier release of the film in April coincides with Yom HaShoah, Holocaust Remembrance Day.

The film, which has already won honors at film festivals, was conceived, co-produced and directed by Yom HaShoah, Holocaust Remembrance Day, a grandson of the Sharps.  He is an experienced documentary film maker, non-profit activist, and venture capitalist.  Joukowsky and his associates spent more than two years gathering documentation including letters and diaries as well interviewing experts on the war, the Holocaust, surviving witnesses, and family members of the Sharps and those they saved.  Rare film footage and never before seen photographs were used throughout the film.

The screening at the church will be followed by an open discussion period.  The program is co-sponsored by the Social Justice Committee and the Fellowship Committee.  Popcorn and refreshments will be available.

The program is open to the public.  A voluntary $10 per family donation is requested to defer the cost of the program, but no one will be turned away.

For more information contact Patrick Murfin at 815 814-5645 or e-mail him at pmurfin@sbcglobal.net.