An Ax to Grind 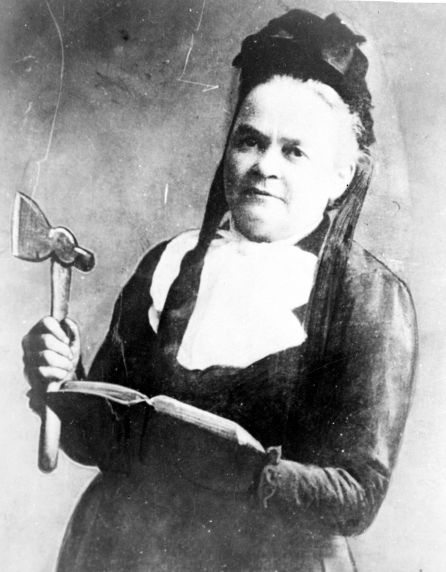 It was on this day in 1900 that Carrie Nation, a/k/a Carry A. Nation, all 6 foot, 180 pounds of her, stormed into a Kansas saloon shouting for the Lord and wielding a hatchet to break up the bar and smash the bottles.  Terrified customers fell over themselves trying to flee the carnage and the obviously deranged giantess.

The militant teetotaler had vandalized saloons before, hurling rocks through windows.  But her husband made an offhand comment that what she really needed was a hatchet.  She thought it was a brilliant idea.  And it was.  Within days news of her rampage spread across the country and she was suddenly famous.

Encouraged, she went on to smash more taverns.

She recognized the symbolic importance of the hatchet as a trade mark and later sold souvenir reproductions and post cards of herself with the “tool of God.”  She even toured on the American vaudeville stage and in English music halls with the trusty blade.  She had to give that up, however when outraged Brits pelted her onstage with eggs.

She was born Carrie Amelia Moore in 1841 to a slave holding family with a small plantation in Gerrard County, Kentucky.  Thus her background was very different from most of the women who later became Temperance leaders, who tended to come from comfortable Northern families with connections to abolitionism and other social reform movements, especially women rights.

Her family was beset by health woes, including several cases of mental illness.  Her mother suffered from periodic delusions that she was Queen Victoria.  Carrie herself, despite her robust frame, was often sickly.  With the continuing illness the family fell into poverty and want, although they retained at least some of their slaves.

By the time of the Civil War, the family was in Cass County, Missouri and were Southern partisans in a state racked by its own bloody civil strife.  Union troops forced them to vacate their farm.  Evacuated first to Kansas City, young Carrie volunteered as a nurse following a Union raid on Independence.

In 1865 despite her Rebel sympathies, Carrie met and fell in love with a Yankee Army doctor, Charles Gloyd.  The couple wed in 1867.  But Gloyd was a heavy drinker.  The marriage was not a happy one.  Before the birth of their daughter Charlien the next year, they had separated.  Gloyd died a few months later.  This tragic episode was the experience that eventually thrust her into the Temperance movement.

A widow with a small child, Carrie attended Normal School to get a teaching certificate that would make her able to hold one of the few jobs open to women.  After graduation she taught for four years in Holden, Missouri.  But she was fired for reasons not entirely clear, but which may have been related to erratic behavior.

In 1874 Carrie met and married David A. Nation, a preacher, lawyer and occasional newspaper editor.  Nation was 19 years older than his 28 year old wife and had the care of several children from a previous marriage.

The couple bought a cotton plantation in Texas, but was soon brought to ruin by their total ignorance of agriculture and the expense of field hands in the post-war south.  They kicked around Texas, David practicing law, Carrie managing hotels, a job at which she turned out to be successful.  In 1889 after David’s involvement in a Reconstruction era battle for control of local government known as the Jaybird/Woodpecker War, the couple fled to Medicine Lodge, Kansas.  David became preacher of the local Christian Church and Carrie managed the local hotel.

She also took up serious temperance work for the first time, founding the local chapter of the Women’s Christian Temperance Union (WCTU).  She launched a personal campaign of persuasion and shaming against local saloon keepers, bar tenders, and public drunks.  She greeted them on the street and at the doors of their establishments with sarcastic comments like,  “Good Morning, Destroyer of Men’s Souls!”  She also became a leader in a campaign to turn the state dry.

A word about the Temperance movement is in order.  America was undeniably a hard drinking country.  It always had been.  Partly this was due to the fact that most water was not potable.  Beer and cider were the table drinks of even the most respectable families and served even to children since colonial times.  The wealthy always enjoyed the fine wines that they could have imported from Europe.

Cheap rum flooded the eastern seaboard as a side effect of the infamous triangle trade—slaves from Africa to the Caribbean, sugar to New England distillers, rum back to Africa.  What didn’t get shipped, got drunk on and near the waterfronts where frequently “every other house was a tavern or rum shop.”


Whiskey, because it was an inexpensive way to get grain crops to distant markets in the pre-canal and railroad era, was a major national product, relatively cheap and soon the beverage of choice over wide swaths of the country, especially in the South and on the old frontier.

But drinking to excess was always a problem.  The famous stocks of colonial New England were most frequently filled by public drunks.  The problem of families being abandoned by drunken men was a common story.  The Temperance movement began to take shape at the turn of the 19th Century as a reform movement spearheaded by Protestant clergy.  At first it was about temperance—moderation.  It preached voluntary moderation in drinking.  It did not necessarily demand that all liquor consumption stop.
The movement took off with the waves of German and Irish immigrants swamping the slums of the big cities.  These people were rowdy, public drinkers—and Catholic.  In fact Protestant ministers became evermore zealous and absolutist in direct proportion to the swelling of Catholics in their midst.

By the 1840’s a well established web of social reform movements spread out from New England and New York across much of the country.  The same folks who advocated the abolition of slavery, prison reform, public education, and women’s rights were also frequently involved in the temperance movement.  After the Civil War, many former Abolitionists shifted their attention to alcohol.  In their minds the saloon was the den of vice that impoverished families.

By the time that the WCTU was formed in 1872, the movement was being spearheaded by reformist Evangelical women, who were evolving a program of governmental Prohibition coupled with the uplifting moral reform of Protestantism.  As even greater waves of dirty, drunken Papists and Jews washed up upon American shores, they became ever more determined.

Although her southern background and her husband’s Democratic politics were different than most leaders on the lecture platform, Carrie was ready to bring zealous, crusading Protestantism to even greater heights.

Then on June 5, 1899 she got her marching orders directly from God.  She later described the experience:

The next morning I was awakened by a voice which seemed to me speaking in my heart, these words, "GO TO KIOWA," and my hands were lifted and thrown down and the words, "I'LL STAND BY YOU." The words, "Go to Kiowa," were spoken in a murmuring, musical tone, low and soft, but "I'll stand by you," was very clear, positive and emphatic. I was impressed with a great inspiration, the interpretation was very plain. It was this: "Take something in your hands, and throw at these places in Kiowa and smash them.
Two days later she was heaving rocks through the window of Dobson's Saloon in the town of Kiowa.  She went on to damage two more that first day.  After the Almighty showed his approval by having a tornado touched down nearby, she took the show on the road across Kansas.  She was frequently arrested, but undeterred.

It was after a particularly wild raid in Wichita, her husband made the offhand remark that for maximum damage she should use a hatchet.  “That is the most sensible thing you have said since I married you.”  She went out and bought the hatchet.  The rest is history.

It is perhaps understandable that a year later he filed for divorce.

Carrie continued chopping up saloons and taking to platforms to talk about it.  She was a strong advocate for total prohibition.  She was a celebrity and perhaps the most famous woman in America.

She collapsed in 1911 giving a temperance address at a park near the home she built in Eureka Springs, Arkansas.  Transported by to Kansas for treatment, she died in a Leavenworth hospital and was laid in an unmarked grave in nearby Benton.  Some years later the WCTU paid for a monument.
Posted by Patrick Murfin at 6:02 AM