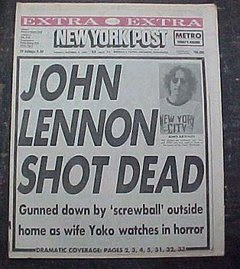 It was 33 years ago today.  John Lennon was shot and killed outside his New York City apartment building.  He never lived to 64, but there was never any doubt we would have still loved him and needed him.
Lennon and his wife, Yoko Ono, were returning the legendary and fashionable Dakota apartments after a stint at the recording studio.  As usual, the couple moved casually through the city with no body guards or entourage.  They had found that if they briefly, but graciously acknowledged the greetings of recognition from strangers, New Yorkers let them go about their business.  Earlier, on their way to the studio, John had acknowledged just such a fan outside the building and pleasantly signed an autograph for him.  On the way back that same moon faced, blond young man stepped up to Lennon and shot him four times at point blank range in the back.  He was pronounced dead just 17 minutes later at Roosevelt Hospital as Yoko screamed, “No! No! It can’t be true!  He’s not dead!  I was just with him!  He’s not dead.”  But, of course, he was.
Much of America famously got the news from Howard Cosell on ABC’s Monday Night Football.  I was working as a second shift custodian at a Chicago trade school and heard the news on the pocket radio I carried as I worked.  I was almost too stunned to continue my routine.
So was much of the rest of the world.  In America, the death was felt as deeply as those other assassinations that had punctuated our lives—John Kennedy, Martin Luther King, Bobby Kennedy.  The grief was worldwide. There was probably no greater cultural icon then the most famous of the Beatles who had carved out a second life and identity as an avante guarde rocker in New York.
Weeping crowds gathered spontaneously at the Dakota and the next day in Central Park.  Yoko announced that there would be no funeral.  John’s body was cremated as is customary in Yoko’s native Japan despite John’s professed horror at the process.  Later she donated $1 million to create the Strawberry Fields memorial in Central Park across from the Dakota.  It remains a spot of pilgrimage.
Lennon’s killer, twenty-five year old Mark David Chapman was arrested at the scene calmly reading a copy of The Catcher in the Rye, a classic tale of adolescent alienation with which he had become obsessed.  The record album that Lennon had autographed for him hours earlier lay on a near-by planter.  It was grabbed by a passer-by in the confusion and many years later offered for sale at auction as a grim souvenir.
Chapman was a young man with a history of being bullied in high school and youthful drug use.  After becoming a Born Again Christian, he cleaned up his act and became a respected youth councilor and worked with war refugees in the U.S. and Lebanon.  He had a long time girl friend and good prospects when he began to suffer mental problems.  He became obsessive about things, including J. D. Salinger’s book and sometimes signed letters as “The Catcher in the Rye.”  In 1977 he took a trip around the world trying to duplicate the adventures he had seen in a screening of Michael Todd’s epic production of Around the World in Eighty Days.
He attempted suicide in Hawaii about the time he began obsessing about John Lennon.  After drifting between jobs as a security guard and a printer, He decided to kill Lennon.  He traveled to New York in both October and November with intentions to kill Lennon, but returned to Hawaii each time, more depressed and delusional than ever with his failure.  He told his wife of his fantasy of killing Lennon.  She tried to talk him out of it, but he returned to New York for the final time on December 6.
After his arrest, Chapman was taken to Bellevue Hospital for psychiatric evaluation.  At a court hearing on his sanity, six specialists testified that he was delusional and psychotic.  Three others said he had psychotic tendencies but met the legal definition of sanity.  Chapman’s court appointed lawyer, Jonathan Marks filed a plea of not guilty by reason of insanity.  In February, 1981 Chapman instructed Marks to change his plea to guilty and offer no defense.  He said that God had instructed him to do so and that he would not change his mind or ever appeal the verdict.  Despite Marks’s arguments that Chapman was incompetent, a judge ruled Chapman could make the plea of his own free will.
On August 24, 1981 Chapman was sentenced to twenty years to life.  He has been incarcerated ever since at the Attica Correctional Facility, outside of Buffalo, New York.  Since 2000 he has been eligible for parole but has been denied seven times.  He is confined in a unit for dangerous criminals, but has a relatively clean record and spends most of his time outside of his cell working in housekeeping and in the prison library.  He is allowed two conjugal visits a year with his wife, and gets visits from other family members.  Most observers believe that he will never be released as long as Yoko, who believes he remains a threat to her and her son Sean, continues to oppose his release.
Lennon remains, all these years later, a cultural icon of the first magnitude.  New books about him are published every year.  His music with the Beatles and as a solo artist has been re-packaged and re-released.  The hippest of contemporary musical artists cover and sample his music.  Blasé 14 year old down load his songs and listen to them on their I-Pods while their grandparents treasure and preserve of LPs.
John Lennon.  Imagine.
Posted by Patrick Murfin at 6:35 AM