Polk Bros. and the Thousands and Thousands Stoops of Light 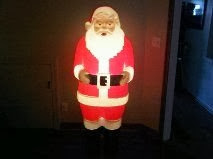 Note:  I’m reviving this seasonal post from last year on no good grounds except that it is one of my favorite pieces of my own writing.  Chalk it up to vanity, but enjoy.
I was thinking about Santa Claus the other day.  Interesting guy.  Interesting story behind how a Fourth Century Bishop from Asia Minor ended up sitting on an elaborate throne in hundreds of American shopping malls posing for pictures with frightened three year olds. But while pondering that mystery, my mind took a left turn down a dusty and forgotten road.  It does that sometimes.
My mind drifted back to dark, cold nights in Chicago in the ‘60’s.  Not to bustling State Street as it was then with the elaborate holiday windows at Marshall Field and Carson Pirie Scott and the throngs of shoppers jostling on the broad side walks as Christmas music played from loudspeakers.  No, my mind drifted to the blue collar neighborhoods—the tidy bungalow belts on the Southwest and Northwest Sides, the blocks and blocks of two and three flats jammed cheek to jowl, even to the crumbling, dangerous ghettos on the West and South Sides.
Up and down those dark streets thousands and thousands of identical illuminated plastic Santas sprang up every year in the days just after Thanksgiving on front porches and stoops, in postage stamp front yards, on balconies and fire escapes, even on garage roofs.  All casting their cheerful, smiling glow onto the soot singed snow.  On a lot of blocks almost every home had one.
From 1964 to 1968 Polk Brothers, a popular local appliance and furniture store chain, gave away the 5” 2’ tall illuminated Jolly Santas with every major purchase.  Offered as an alternative was a smiling, caroling Snowman originally intended for Jewish customers.  Many folks came back and added the Snowman in subsequent years.  In those four years more than 250,000 of the Santas alone were given away.  No wonder they were ubiquitous.
Polk Brothers was the kind of operation that advertised in the Sunday Funnies and on radio and TV.  Their stores were not in the Loop but on artery avenues of the neighborhoods themselves.  In the days before everyone had a Visa or a Master Charge card and when the snooty downtown department stores were stingy on credit for blue collar families, Polk Brothers trusted their customers to take home the merchandise and pay “on time.”  Ladies in babushkas and men in grimy work clothes would climb on busses after every pay day and count out payments of $5 or $10 to service desks at the stores.
That’s how families whose parents lived in cold water flats and boarding houses, got that refrigerator, color TV set, or the whole suite of living room furniture—sofa, love seat, end tables, coffee tables and lamps—for $199.  No wonder they loved Polk Brothers.  And Polk Brothers loved them back with all of those free Santas and Snowmen.
It made for such an utterly American Christmas—crass, commercial, to the sophisticated eye vulgar and tasteless, yet full of love and joy, and perhaps most of all hope.  The very angels could not have sung on high with greater hope and gladder tidings than those goofy stoop Santas.
Driving down those same streets almost 50 years later you can still sometimes spot a survivor glowing in the dark, his red suit faded, his white beard yellowed, perhaps cracked and even mended with tape.  I like to imagine that behind the bungalow door is an old couple who, when their children were babies first put that Santa out.  And that maybe, just maybe, he is a beacon now to draw those long grown children and their children and maybe even their children for one more Merry Christmas home.