How Did a Fourth Century Bishop Become Santa Claus?

St. Nicholas was a hugely popular American magazine for children first published in 1872 and flourishing down to the Depression.  It had serious literary ambitions  and published many leading writers.  Naturally its namesake was often its cover boy.  And his evolution can be seen over the years.  At left from 1874 he is still portrayed esentially as a saint, complete with halo. 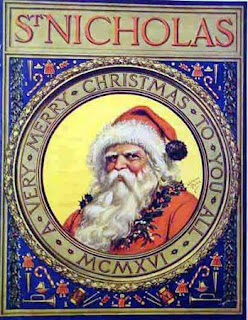 By 1916 he had donned his red suit.  His beard was long and
flowing.  But by modern standards, he seems a bit foreboding.

By 1925 he had softened some--and seems to be enjoying a popular gift that Christmas--a crystal radio set.