Give credit where credit was due.  It was all Arch Ward’s idea.  He was the sports editor and principle baseball writer for the Chicago Tribune, the 800 lb. gorilla of Second city and Mid-Western newspapers.  Why not, he suggested, stage a mid-summer exhibition game featuring the biggest stars of the American and National Leagues to coincide with the Century of Progress—the World’s Fair on the Lake—in 1933.
At first the two leagues, which had, at best, an uneasy relationship with each other were reluctant.  But the Depression was cutting into attendance at all but a handful of ballparks and Ward and his supporters soon convinced owners that the national attention could boost ticket sales.  It also helped that Ward was a crony of Tribune owner Col. Robert R. McCormick and a political powerhouse in the Republican Party and hyper-conservative circles on his own—views fervently shared by most owners.
The concept of All-Star teams was not unknown.  Back in the earliest days of the National League Albert Spaulding toured nationally and even internationally with hand selected squads in the off-season.  Various star players were still assembling all-star teams—usually made up more of cronies than a full squad of actual stars—and barnstorming against local teams.  And the chance to see Big Leaguers in tank towns and back waters did bring out fans in droves.  Now a lot of those same small town fans would be flocking to the big city for the fair.
Otherwise there was scant play between the two leagues except in spring training where many teams saw each other in the Florida Grapefruit League.  Except, of course, for the goofy Cubs who trained in far of Catalina Island, California for now good reason except that the Wrigley family owned property there.   Sometimes in cities with teams in both leagues—Boston, New York, Philadelphia, St. Louis, and Chicago—inter-city exhibition games were scheduled, usually at the end of spring training or after the regular season was over.
In the days when players tended to spend all or most of their careers with one team, even the players were unfamiliar with each other unless they had played with or against each other in the minor leagues.
Players for the exhibition game, which was expected to be a once-in-a-life-time extravaganza, were selected in a system that somehow combined the choices of each league managers with a fan poll conducted not-too-scientifically or reliably by the Tribune and a handful of other newspapers.  The results were predictable.
The American League team under Philadelphia manager Connie Mack was a heavy hitting power house long on home run hitters  and dominated by the princes of baseball—New York Yankees sluggers Babe Ruth, Lou Gehrig, and Ben Chapman in addition to hurler Lefty Gomez.  The starting squad also included two members of the White Sox—Jimmy Dykes and Al Simmons, both new to the team from a trade with the Philadelphia Athletics.
The National League, by contrast, still relied on small ball—slap hitting, singles, doubles, steals and aggressive base running, bunt and sacrifices, working the count for walks.  Pitching was aggressive, brush backs and intentional bean balls a part of the game.  The whole style of play was aggressive, rhubarbs with umpires and bench clearing brawls were common.  The team, while talented and suited for such play, did not feature the kind of legends-in-the-making on the American roster.  Veteran Giants manager John McGraw fielded a team that included Pepper Martin, Frankie Fritche, and Jimmie Wilson all of the league dominating St. Louis Cardinals along with starting pitcher Bill Hallahan.  The Cubs placed no players among the starters.  Their biggest star, catcher Gabby Harnett and short stop Woody English were reserves along with pitcher Lon Warneke.
Since the game was to be played at the White Sox home of Comiskey Park, the umpires were from the American League.  And that made a difference, too, because umpiring styles were very different between the two leagues.  American umpires squatted behind an enormous inflated chest protector behind the plate.  That caused them to have a high strike zone friendly to sluggers.  Sluggers whaling away also reduced walks.  National League players were used to umpires with padded chest protectors worn discretely under their wool suit coats.  That enabled them to get down low behind the plate and their strike zone was low—from the knees to just above the belt, barely.  They called more balls working the count up and causing hurlers to throw pitches.
With huge national advance publicity, fans flocked to standing-room-only Comiskey Park and milled around on the streets outside.  In downtown areas of major cities fans gathered to watch play-by-play coverage flashed on electronic scroll signs just as they did for World Series Games.  Millions hunkered by their radios as the game was broadcast nationally by both the NBC and CBS radio networks.  Cameras from all of the major Newsreel companies ground away from the grandstand roof.  The press box was jammed to overflowing scores of sportswriters from every major and most minor cities plus national magazines. 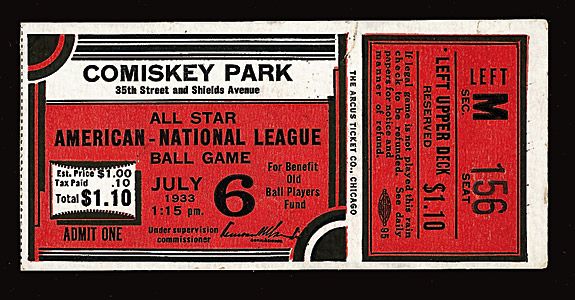 As for the game itself, it was not quite the American League blow out almost everyone expected.
In the bottom of the second the American League got on the board when pitcher Hallahan issued one-out walks to Jimmy Dykes and Joe Cronin. Two batters later, pitcher Lefty Gomez singled home Dykes for the first run. In the bottom of the third, after a walk to Charlie Gehringer, Babe Ruth famously hit the first home run in All-Star Game history, putting the AL up 3-0. Hallahan was chased from the game after walking Lou Gehrig immediately afterward, and was replaced by Cub Lon Warneke. General Crowder replaced Gomez to start the fourth inning. In the sixth, Warneke hit a one-out triple and scored on a Pepper Martin groundout. Frankie Frisch followed with a home run to bring the NL to within a run, but after a Chuck Klein single, Crowder would escape the inning without giving up any more damage.
Cronin led off the bottom of the sixth with a single. After advancing on a bunt, he scored on an Earl Averill single to extend the lead to 4-2. Crowder would be replaced by Lefty Grove in the top of the seventh, while Warneke was replaced by Carl Hubbell in the bottom of the inning. The NL looked to have a chance in the top of the eighth. With Frisch on first with two outs, Chick Hafey lined a shot to right field that looked like it could be home run, but Ruth, in rare defensive acrobatics, reached over the wall to catch it, denying the NL a chance to tie the game. Grove retired the side in order in the ninth to secure the American League's victory.
All in all an exciting, if kind of old fashion, baseball game that left fans satisfied and wanting more.
And more they got.  The game became an annual event and, as predicted, raised interest in baseball and ticket sales across the country.