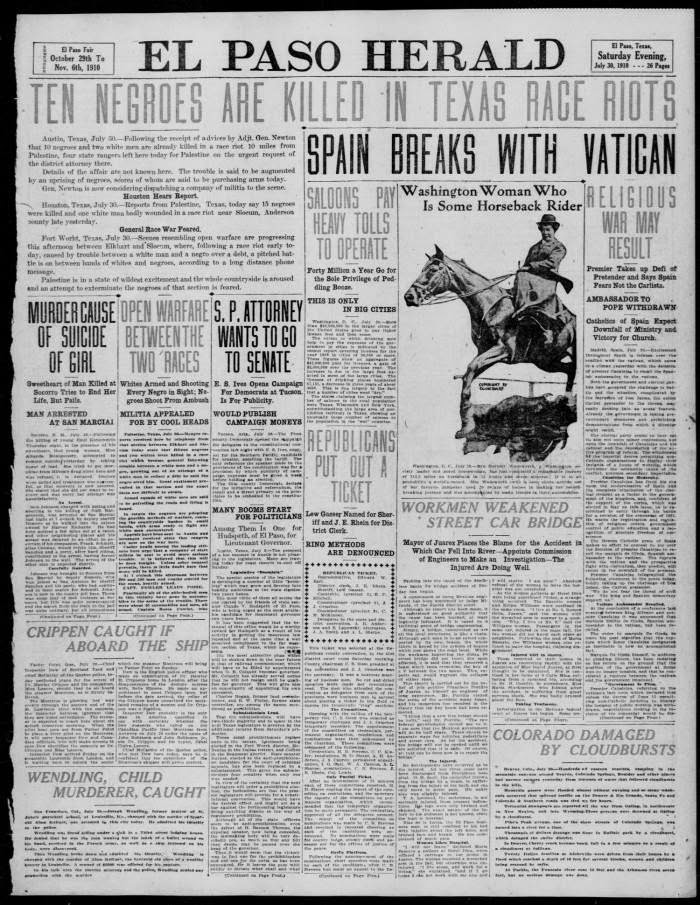 In the early years of the 20th Century when the rule of Jim Crow triumphed across the states of the old Confederacy and most border states, well organized violence against African Americans and their communities was rife.  The wave of lynchings, some extending far north of the Mason-Dixon Line, has been well documented.  Attacks which destroyed well established a prosperous Black communities like Tulsa, Oklahoma in 1921 and Rosewood, Florida in 1923 have become legendary.  In those attacks whole communities were put to the torch, residents killed and assaulted, and driven away.  They are usually categorized as simple race riots, a term which could lead the casual reader to believe that they were riots by Blacks like the urban upheavals of the ‘60’s and ‘70’s.
But more than twenty years before either of those atrocities, something occurred in the sleepy and remote East Texas village of Slocum that was more horrible yet than a simple riot or the ethnic cleansing of uppity Negros.  For two days, July 29 and 30, 1910 well organized groups of between 200 and 300 white Texans engaged in a systematic hunt of the Black citizens of the unincorporated town, shooting them down where-ever they found them—on the streets, on their farms, in the scrub pine woods, fields, and dusty roads as they fled in terror of their lives.  In fact the killing may have gone on even longer, and included the later “disappearances” of Black witnesses to the original attacks.
After initial headlines in Texas and even national press and a brief spate of investigation and even indictments, the incident vanished from public consciousness.  This was made possible by the fact that Slocum was so isolated, 100 miles west of still sleepy pre-oil boom Waco, and the fact that survivors were dispersed across Texas and the South, some even heading to the supposed safety of Northern cities.  Those who remained in the area laid low, very low, in fear of their lives.  White participants might brag of it in saloons and living rooms, but were tight lipped when strangers poked around.
Texas historians, a special breed all unto their own, decided simply to ignore the evidence presented by contemporary news accounts and court records.  The incident is entirely absent from the Texas history textbooks which are mandatory reading in all public schools.  The Texas Historical Society, which has histories of virtually every community in the state, completely omits the Slocum Massacre from its listing for the town.  Even Wikipedia does not have an article on the incident, only three short paragraphs in their general entry on Slocum.  One could easily conclude that there has been a conspiracy of silence.
But thanks to the diligence of one maverick Texas journalist and historian E. R. Bills the story of the Slocum Massacre has come to light via a series of articles and a new book, The 1910 Slocum Massacre: An Act of Genocide in East Texas published this May by the History Press.  Bills dove into newspaper accounts, court and government records, and sought out survivor’s families to piece together the forgotten tale.  This account relies mostly on his magazine summaries of the events. 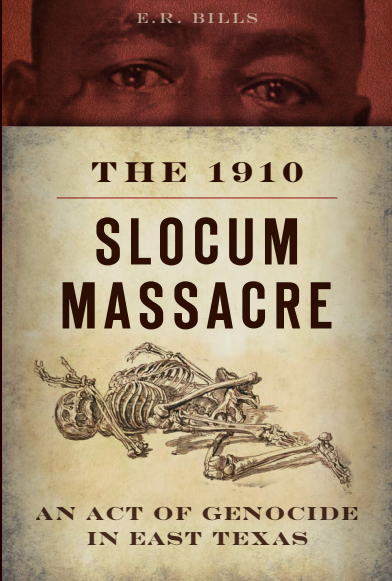 In 1910 Slocum was an anomaly in and the South.  The village was the center of a farming community established by former slaves following the Civil War.  Residents had prospered modestly.  Most farmers owned their land.  A handful of businesses, two churches, a one room school, and a Post Office served the community.  The businesses were black owned and three or four families dominated the town.  The town was unincorporated, but informally ran its own affairs.
Slocum was situated in Anderson County where a large majority of other residents were white.  Despite having lived side by side for decades, the relative independence and prosperity of the Black town galled some local whites.  It didn’t take much, grudges held over a couple of minor incidents, to get rumors flying and for certain influential white citizens to start plotting revenge.
Unlike the supposed causes of many lynchings and other acts of violence, there was no allegation of a Black on white attack, or the common “disrespect” of white women.  The sparks were more mundane than that.

Marsh Holley, whose family owned a store, a dairy and several hundred acres of farmland, had been approached by a white an over a debt.  There was a dispute and the white man left unsatisfied.  He began to circulate rumors that Holley had threatened or intimidated him.  Then Abe Wilson was put in charge of some local road improvements by a county construction foreman, a job evidently coveted by prominent white citizen named Jim Spurger.

Spurger took the lead in circulating wild rumors around the county, including charges that Blacks in Slocum were arming themselves for a rampage against whites.  It was all ridiculously easy.  Within days passions were inflamed.  Then Slocum and his allies planned their attack.
On the morning of July 29 between 200 and 300 hundred men armed with shotguns, rifles, and pistols converged on the town from all side in automobiles, wagons, and on horseback.  They cut telephone and telegraph lines into town and blocked the county road and various farm roads converging on the village.  As they closed in, some men dismounted and spread out advancing in what amounted to a skirmish line.
The first victims fell at the Holley family dairy farm near Sandler Creek.  Whether their connection to Holley was known or if they were just the first to get in the way of the mob was never established.  Three teens were found feeding cattle.  18 year old Cleveland Larkin was killed, 15 year old Charlie Wilson was wounded, 15 year old Wilustus “Lusk” Holley, escaped.
Young Holley’s safety was short lived. Later in the day while he and his 23 year old brother, Alex, and their friend William Foreman, were found as they were fleeing to Palestine, the county seat. Alex was killed and Lusk was wounded. Foreman fled and disappeared never to be found again. Lusk pretended to be dead so a group of 20 white men would not finish him off.  Foreman was one of dozens of men who fled into the surrounding pine woods and marshes where they were hunted down and killed, their bodies left to the “tender mercies of the buzzards” and never found.
The attackers continued to advance, shooting any black men they encountered on sight.  John Hays, 30, was found dead in a roadway and 28 year old Sam Baker was shot to death at his house.  The next night three of Baker’s relatives Dick Wilson, Jeff Wilson, and 70 year old Ben Dancer sat up with his body.  The house was attacked and all three men executed.
As residents began to realize they were under attack, they began to attempt to escape in all direction.  The mob stalked them, sometimes for miles. Two bodies found near the town of Priscilla had bundles of food and clothing at their sides. They were shot in the back.  Will Burley’s body was found south of town across the line into Houston County.  The death of Anderson Austin was reliably reported to have occurred near Slocum by a local bank president, but his body was never found.  Likewise Abe Wilson, the man who had gotten the road construction appointment, was never found alive or dead.
Marsh Holley was found alive on the just outside of Palestine.  He begged authorities to put him in jail for his own protection.
Systematic hunting of refugees continued all day, through the night and into the evening of the 30th.  Gunfire was regularly reported from the scrub lands around the town.
Word got out about the attacks and newspaper carried initial reports on the 30th.  All initially repeated charges that the violence was due to a planned Black uprising.  County authorities in Palatine already knew better.  A district judge issued an order closing saloons and banning the sale of alcohol—the white mob was known to be well lubricated with liquid courage and forbidding stores from selling arms and ammunition.  Sheriff William H. Black prepared to act but perhaps doubting the loyalties of his deputies and any possible posse he could raise, needed to wait for reinforcements from the Texas Rangers and state Militia.
When Black and the Rangers arrived on the scene late on the 30th executions were still going on outside of town.  On July 1 Rangers fanning out along the roads, recovered six bodies.  Two more had already been found.  Yet Black knew the death toll was much higher.

Men were going about killing Negroes as fast as they could find them…These Negroes have done no wrong that I can discover…I don’t know how many were in the mob, but there may have been 200 or 300. Some of them cut telephone wires. They hunted the Negroes down like sheep.
Because many residents simply fled never to return there was no good way to know how many had been killed in the country side or whose bodies may have been hidden.  Estimates range from a dozen more than the official tally of eight to twice that.  And the disappearances were not over.
The arrival of the Rangers and Militia, who remained posted in the town for weeks, allowed some residents to return.  Most of them planned to pack what belonging they could salvage and permanently leave.
Judge B. H. Gardner convened a grand Jury in Palestine to investigate the attack.  In his charge to the jury he said that the massacre was “a disgrace, not only to the county, but to the state.”  The grand jury called as witnesses virtually every resident of the area and suspected members of the mob it could find and interviewed several hundred witnesses.  Some Blacks on the witness list who had returned to town went mysteriously missing.  They may have run for their lives rather than testify—or they may have become late additions to the death toll.
Eventually 11 men were arrested, including Jim Spurger, relatives, and close associates.  Seven were indicted.  Eventually all were released on bail and the trial venue was changed to Harris County where local judges refused to proceed with the prosecution.  After spending short periods in jail before being bonded out, all of the men got off free.
Many local white residents benefited handsomely by the abandonment of Slocum by its former residents.  By hook or by crook—on liens for loans, in tax sales of abandoned property, or outright appropriation—they came into possession of farms, homes, and business establishments complete with inventory.
Seventeen years after the massacre Slocum was hit by a tornado in 1927 which leveled all but two buildings in the town, including all of those which had been erected by the original inhabitants.  The town rebuilt and went through ups and downs with a population that yo-yoed between 75 and 350 over the decades.  The lingering effects of the massacre are still felt.  While other Anderson county towns and villages now have 20% African-American population, only 7% of the current 250 residents of Slocum today are Black.
Thanks to the tireless efforts of E. R. Bills and rising interest on the 100th anniversary, the Texas Legislature finally passed a resolution in 2011 acknowledging the incident and issuing a sort of apology.  Efforts by family members to have an official state historical marker placed in the town has been vigorously resisted by current residents and has gone nowhere with the state authorities.  And unlike the better known cases of Rosewood and Tulsa, no whisper of possible restitution to the families for their losses has been heard.
Texas media took note of the anniversary yesterday.