1848 was the year of revolution in Europe.  On this side of the pond another kind of revolution, one that continues to this day, had its beginnings in a hastily called meeting in a small industrial town in Upstate New York.
The Seneca Falls Women’s Rights Convention which was called to order on July 19, 1848, had been hastily arranged by a group of ladies who had come together over tea at the home of Jane Hunt to meet a visiting celebrity. Lucretia Mott was a leading Anti-Slavery advocate and noted public speaker from Boston.  Attending the tea were Mary Ann McClintock; Martha Coffin Wright, Mott’s sister; Elizabeth Cady Stanton, a young mother and veteran anti-slavery advocate, and Hunt.
Except for Stanton, the women were all members of the Society of Friends—the Quakers. Stanton was a Freethinker, although it was unlikely that her friends then understood how radical her religious views were.
Stanton recalled meeting Mott in 1840 at the International Anti-Slavery Convention in London where women in the American delegation were refused to be seated.  She then, according to her account many years later, went on a diatribe about the general condition of women and their lack of economic and political rights.
The women decided to call a convention to discuss advancing the status of women.  But it had to be done quickly before Mott, the major draw to such an event, left the area.  McClintock, only 27 years old, and Stanton were given the principle assignment of making the arrangements.  The local Wesleyan Methodist Chapel, the frequent site for anti-slavery, temperance, and other reform causes, was secured as a venue for a meeting scheduled only eight days after the tea.  A brief call to meeting was placed in the local Seneca County Courier which was picked up by Frederick Douglas’s North Star and other reform publications. 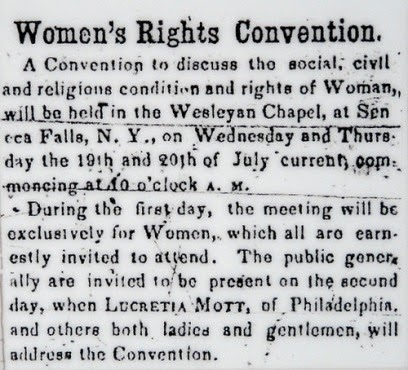 Meanwhile Stanton was given the task of drawing up a Declaration and a set of resolutions.  Shrewdly, she drew from Thomas Jefferson’s soaring rhetoric in the Declaration of Independence.  She wrote that “all men and women had been created equal” and went on to list eighteen “injuries and usurpations,” the same number of charges leveled against the King in the original document, “on the part of man toward woman.”
She also drafted eleven resolutions, most of them dealing with the right of women to own property, conduct business in their own name and other legal and economic reforms.  Ten had been broadly agreed to at the tea.  On her own authority, Stanton added another, which she placed in the ninth spot which read, “Resolved:  That it is the duty of the women of this country to secure to themselves their sacred right to the elective franchise.”  The addition even shocked Mott, who was afraid the inclusion of a demand for the right to vote would be so radical that it would discredit the whole document.  By Stanton’s later account Mott exclaimed, “Why, Lizzie, thee will make us ridiculous.”  But all agreed to submit it to a vote of the convention.
On such short notice the meeting was hardly a national event.  Many prominent women and reformers from Boston, Philadelphia, and New York City were unable to attend—indeed were likely completely ignorant it was taking place.  Attendees would be drawn from the immediate area around Seneca Falls.
Luckily for the organizers the Finger Lakes region was populated by some of the most progressive and reformed minded people in the U.S.  Heavily populated by progressive Quakers, reform minded Methodists, Universalists and other religious groups, it was a hot bed of early Abolitionism and of other reform movements, especially Temperance, the mother cause for many first generation feminists.
The call went out not just to women, but to sympathetic men, of whom there were several, including Lucretia’s husband James, a leading anti-slavery crusader and Fredrick Douglass from Rochester.  Stanton’s husband Henry was a lawyer who advised her on points of law while she was drafting the resolutions.  But he had political ambitions and was frightened by the call for the vote for women so he arranged to be out of town during the convention so his name would not be associated with it. 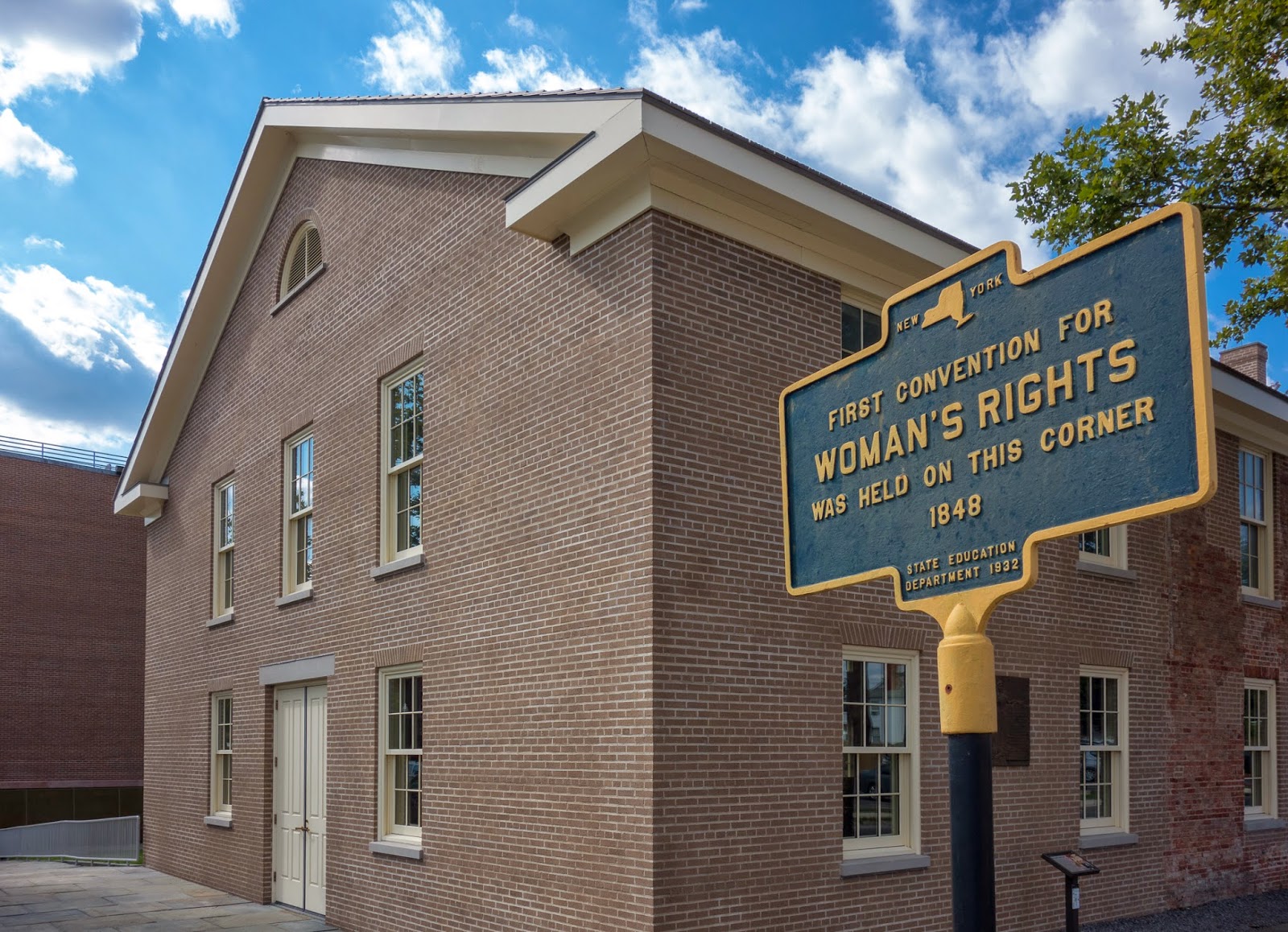 The convention started in the middle of a rare blistering heat wave.  Temperatures would reach the 90’s both days.  A sizeable crowd, including 40 men, was outside the Methodist church waiting for admittance at 10 A.M.  Unfortunately in the press of events, no one remembered to ask the Sexton to unlock the building.  Stanton’s young nephew had to be boosted through an open window to unbar the door.
Soon the crowd filled the main floor and overflowed into the balcony.  Men had been asked to attend only the second day, but seeing so many there, they were admitted but asked to refrain from speaking until the next day.  McClintock was appointed secretary.
The first day was largely taken up by speeches by Mott and Stanton, a humorous reading, and a first reading of the Declaration and Resolutions.  To conduct business the next day, no woman would step forward to claim the chair.  It was considered unseemly for a woman to preside over men.  James Mott was called onto chair the morning session where the Declaration and resolutions were debated.  All of the resolutions passed unanimously except the motion on suffrage, which experienced significant resistance.
Then Fredrick Douglass took the platform and delivered an eloquent plea of support for the resolution,   “In this denial of the right to participate in government, not merely the degradation of woman and the perpetuation of a great injustice happens, but the maiming and repudiation of one-half of the moral and intellectual power of the government of the world.”  His argument swayed the attendees who voted heavily in favor, although not unanimously and there were some walk-outs. It would not be the last time Douglass and other prominent Black Abolitionists came to the aid of early Feminism.
Emboldened by the radical turn of events Mott offered a twelfth resolution, although she must have known that it would cause the loss of support for the cause from several clergy present,  “Resolved: For the overthrowing of the monopoly of the pulpit, and for the securing to woman equal participation with men in the various trades, professions and commerce.” The assembly, made up largely of Quakers, a faith without ordained clergy but which allowed women like Mott to be recognized as lay preachers, easily passed the addition.  Predictably some of the clergy in attendance, although never offering objection at the meeting, went back to their churches to denounce the meeting and its document.
Out of an estimated three hundred in attendance one hundred women and men signed the Seneca Falls Declaration, although subsequent criticism caused some of them to remove their names.  There were separate columns for the endorsements of women and men.  The organizers considered the meeting a success.  Douglas prevailed upon Mott to stay in New York long enough for a second convention to be held two weeks later in Rochester.  Over the next two years similar local or state conventions were held in Ohio—where Sojourner Truth made her famous “Ain’t I a Woman” speech—Indiana , and Pennsylvania.
The novelty of the event and its radical declaration drew considerable press notice, some of it supportive, but most of it either ridiculing or reviling the meeting and its organizers.  Most of the reformist press was more or less positive. Horace Greely offered tepid support in the New York Tribune.  But rival James Gordon Bennett derisively printed the entire Declaration in the New York Herald expecting that the document was so outrageous that it would self destruct.
Stanton had another opinion, “Just what I wanted…  Imagine the publicity given to our ideas by thus appearing in a widely circulated sheet like the Herald. It will start women thinking and men too; and when men and women think about a new question, the first step in progress is taken.”
Despite the publicity at the time many participants did not think of the Seneca Falls Convention as foundational.  Mott regarded it as just one of many meetings she attended or addressed and as just a part of an on-going process.
Others would look to the 1850 National Women's Rights Convention in Worcester, Massachusetts as the true beginning of an organized movement.  By that time Stanton had become the ally of another rising feminist, Susan B. Anthony and women’s suffrage took center stage as the main demand instead of being a controversial add-on.
It wasn’t until 1876 when the now grey Stanton published the first volume of History of Woman Suffrage that she celebrated the Seneca Falls meeting as foundational, “the greatest movement for human liberty recorded on the pages of history—a demand for freedom to one-half the entire race.”  Despite the derision of rival Lucy Stone, Stanton’s late assessment became enshrined as the central act in a creation story.
By the time that book was issued, Stanton had been marginalized in the movement.  Even her closest ally, Anthony, sometimes kept her at arms distance because of her scandalous freethinking views on religion.  Many leaders believed the support of church women was essential to furthering the cause and Stanton was a red flag in the eyes of many of them.
Some historians now believe that Stanton may have inflated the importance of the Seneca Falls meeting in the book to regain her place as central to the movement’s history.  But then again many of those same historians are as uncomfortable with Stanton’s apostasy as were the likes of Lucy Stone.
Discounting the myths that have grown up around the event—it was not a national convention, men were not only in attendance but played leading roles, and suffrage was not the main focus—the contemporary press accounts of the event and the energy that it gave to ongoing efforts, not the least of which was launching Stanton’s career, make it clear that to be at Seneca Falls was to be present at creation.