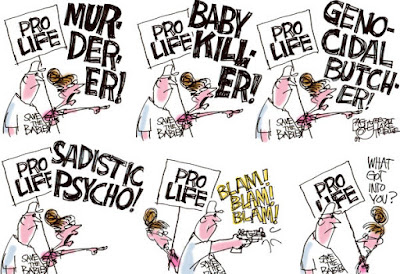 Note—Some of my earliest pontificating came in the Letters to the Editor of my local newspapers going back to a missive in support of the Nuclear Test Ban Treaty in the Wyoming Tribune back in 1963 in when I was fourteen years old.  For many years I regularly contributed my wit and wisdom to the Northwest Herald, the local daily paper serving McHenry County, Illinois, sometimes as often as the one-letter-every-six-week would allow.  I got a well-earned reputation as one of the reliable local cranks, if one of the few left leaning ones.  Many letters were spurred by bone headed editorials, op-ed pieces by the paper’s never ending supply of conservative commentators, or particularly wacked out letters from a reliable cadre of right wing cranks.  It was emotionally satisfying.  But ever shrinking word limits have made it difficult for a blow hard like me to make a complete, rational, and brilliantly stinging rebuttal.  Then the emergence of on-line comments in the paper’s web page opened up a whole cesspool of vitriol and abuse that took the fun out of it.  Besides, I developed other forums in which to bloviate, this blog being the principle one.  But once in while something in the paper will re-ignite the old fire in the belly.  This response to an op-ed column is way too long for the Herald to print, but I thought I would give you the experience of the old longer form.  Perhaps I will then hack it down to the now permissible 250 words and submit it.  Or maybe not.
To the Editor:
In your Thursday, December 3 edition, you printed a commentary by Ramesh Ponnuru titled Who’s to Blame for Planned Parenthood Murders? in which he offered a no-not-us defense of the anti-abortion movement, or as they prefer to style it, the Pro-Life movement so that anyone who disagrees with them can automatically be cast as diabolically pro-death.
Ponnuru cut right to the chase with his very best gotcha—the 2009 murder of Jim Pouillon who was distributing graphic anti-abortion tracts at an Oswego, Michigan high school.  Pouillon was an elderly local activist confined to a wheelchair and dependent on oxygen.  His shooting by Harlan James Drake, who also shot and killed a local businessman who had no connection the anti-abortion cause, was indeed despicable and cowardly.  In fact I said as much—as did virtually everyone of note in the pro-choice movement—in a post titled  The Death of Mine “Enemy”—Sharing Grief, Outrage, and Humanity in my blog Heretic, Rebel, a Thing to Flout.

In his article Ponnuru first goes into the time honored conservative snivel that the murder was not covered by the allegedly liberal media.  Not true.  It was a sensational story which generated front page coverage from coast-to-coast and was featured on all of the TV network and cable news programs, as was Ponnuru’s funeral and Drake’s subsequent trial.  Look it up.  Of course the coverage may have been spurred by the man-bites-dog rarity of violence against anti-abortion protesters.
Ponnuru then congratulates the Pro-Life Movement for refraining, “from suggesting pro-abortion rights groups bore responsibility for the murder,” for which he claims “I’m not aware of any exceptions to this generalization.”
Having claimed this high moral ground, he then levels his fire at the Pro-choice movement still reeling from three murders and multiple injuries in the Colorado Springs Planned Parenthood attack.  “They intend to turn the killings ‘into a political moment they say will put abortion opponents on the defensive.’”  This is one of the most reliable tools in the bag of tricks of conservative writers—Ponnuru is a senior editor for National Review and a visiting fellow at the American Enterprise Institute—immediately turning themselves into the “real victims” of horrific episodes of senseless violence.  This kind of pitiful whining is also the bread and butter of the National Rifle Association and gun lobby machine every time public outrage threatens to turn against them.
Of course, the dastardly proponents of the so called baby killing industry are abetted once again by that terrible liberal media, who ask tough questions of Republican politicians at inconvenient times because “most journalists are themselves on this side and inclined to see anti-abortion supporters as extremists.”  As always Ponnuru pretends that the powerful right wing media machine of which he is a part—the leading national cable news network which is little more than a partisan propaganda machine; complete domination of influential radio talk shows; ownership through Rupert Murdoch and others of a vast empire of newspapers, magazines, and publishers; an array of popular web sites and blogs;  think tanks with impressive sounding names which feed cooked-up statistics and pseudo-science which the allegedly liberal media obligingly publicizes; and, of course the legions of conservative pundits and commentators featured in the main stream media and available for “balance” to counter every statement from a liberal politician or activist group.
Then Ponnuru pulls out his cleverest rhetorical trick—a claim that is narrowly true but completely deceptive, anti-abortion violence “is only slightly more common than pro-abortion rights violence against adults, which is to say not very common at all.”  It is absolutely statistically true that deaths due to terrorism of all ideological types are extremely rare when stacked against all causes of death, despite the public attention they generate.  Millions of Americans die every year, only a relative handful to any type of terrorism.  The difference between the numbers of deaths and injuries on either side of the abortion debate are thus statistically insignificant.

But a direct comparison of real numbers tells a different, much more lop-sided story.  Since 1993 there have been 11 murders and 26 attempted murders due to anti-abortion violence including the deaths of four doctors—one shot by sniper in his own home and another gunned down in his church where he was serving as an usher—in addition to two clinic employees, a volunteer escort, a security guard, and now two non-patients accompanying others and a responding police officer.  Ponnuru has already run out of examples on the other side.
In addition there have been over 200 bomb and arson attacks on clinics, support facilities, and pro-choice offices since 1977, and100 chemical attacks mostly employing the vomit inducing and long lasting poison butyric acid.  Against this record there are a handful of cases of simple assault—mostly pushing and shoving incidents as clients and their supporters tried to gain access to clinics being physically blocked by anti-abortion protesters.
So in actual numbers—and in seriousness—anti-abortion violence far outstrips that from the opposing side.  And we are not counting the tens of thousands of threats of violence made annually against providers, their supporters, and women who have used clinic services for any reason.
Ponnuru acknowledges that all political rhetoric can inspire violence.  That’s big of him.  But he claims that the anti-abortion movement has condemned and sought to root out violence in its ranks.  Certainly the leaders of the mainstream anti-abortion movement and most—but not all—politicians have rushed to issue condemnations of violence while disclaiming any responsibility.  They also add a big but, as Ponnuru did when he understood that, “Many on this side say abortion is an evil on par with slavery. Some deranged people may try to play the part of John Brown in that analogy.”  That’s an exceedingly popular comparison, and also something of a wink and nod to violence.
Given the absolute view that all abortion is murder and that a sort of genocide of the unborn on the scale of Nazi death camps—another popular analogy—Ponnuru sees little reason for anti-abortion activists to temper their rhetoric beyond “anything more inflammatory than needed to make their case against the injustice that moves them.”  Than needed leaves a lot of elbow room for inflammatory speech.
His immediate example, however, is not one of the hundreds of quotes that can easily be found from radical anti-abortion leaders, but a misquote of Hillary Clinton who he claims, “should stop saying that peaceful, run-of-the-mill anti-abortion supporters are like terrorists.” Of course Clinton never suggested that.  She did suggest that the overheated rhetoric of some anti-abortion leaders and Republican politicians have de-facto encouraged terrorism.  With good reason.

Take presidential hopeful Jim Pouillon he has recently basked in the endorsement of Troy Newman, head of the leading radical Christian pro-life organization Operation Rescue, which has a long history of inspiring and winking at anti-abortion violence.  Newman is noted for claiming that the execution of abortion providers is justified.  Cruz has used some pretty heated rhetoric himself and has refused to distance himself from Newman or his supporters in the wake of the Colorado Springs killing.
Ponnuru insists that any restraint of rhetoric urged by Pro-Choice activist is proof that, “aren’t objecting to the anti-abortion movement’s rhetoric; they’re objecting to its existence.”  Another flat out poor-me lie.  Neither is the Pro-choice movement arguing that the vast majority of abortion opponents and activists are violent or condone violence.  But the movement has long tolerated, and sometimes encouraged a growing fringe.
There has been no call to suppress pro-choice rhetoric by state action or censorship, just an appeal for less hyper-hysterical rhetoric and a more sincere effort to clean up the movement from its most violent prone fringe.
Meanwhile Ponnuru and others like him can unsuccessfully search high and low for any advocates of violence and terrorism against the anti-abortion movement.
Mr. Ponnuru, you claims of phony equivalence are patently absurd.