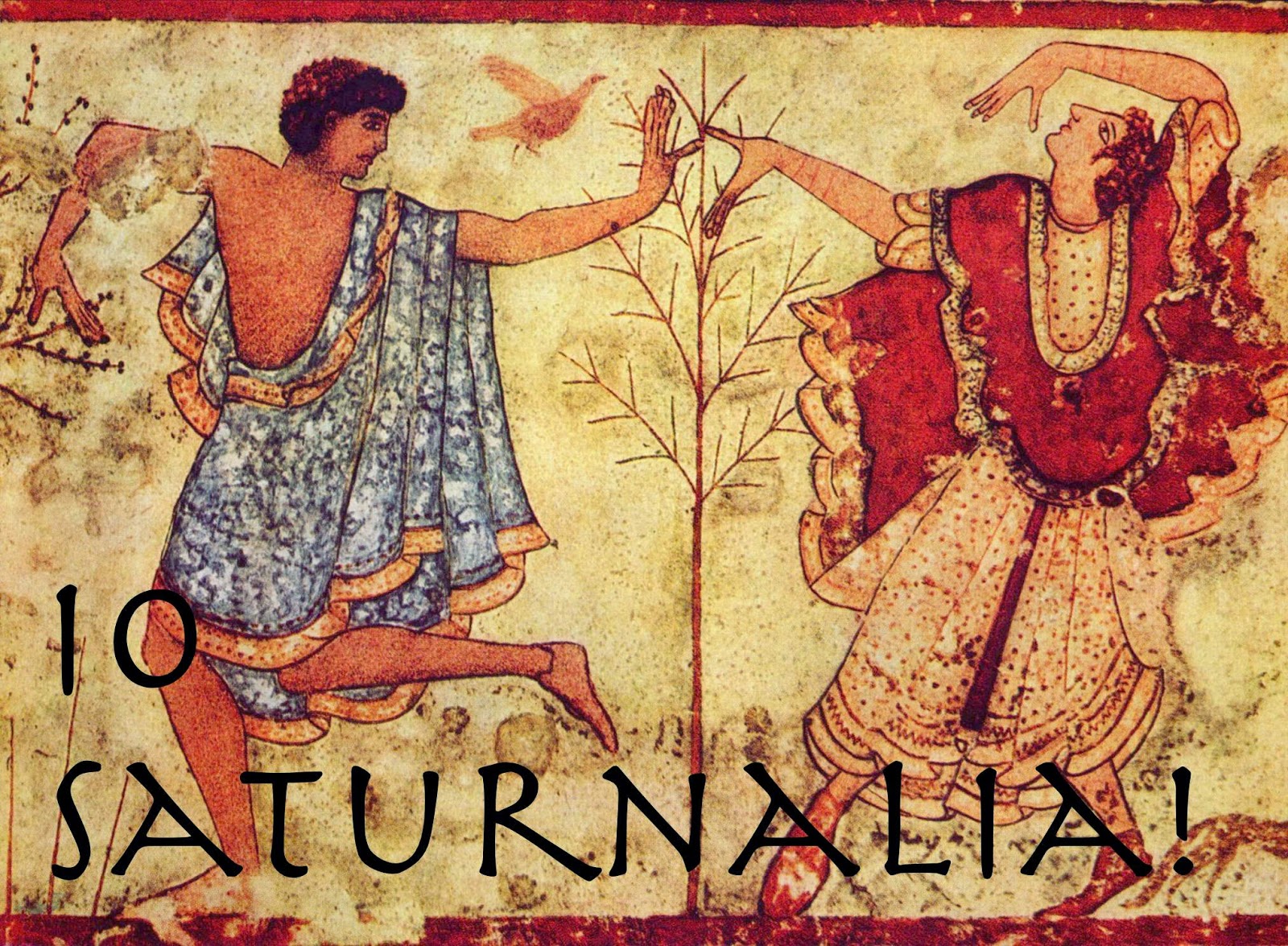 Saturnalia was the Roman feast of Saturn, the god of Harvest, a dies festus, a legal holiday when no public business could be conducted.  It was first celebrated on this date—accounting for a couple of changes of calendars—in 496 BC.  At various points during the Republic and Empire festivities extended over seven, three, and finally five days.
For a long time, all I knew about Saturnalia was that when I was in Cheyenne East High School the Latin Club nerds plastered the school with posters reading Io Saturnalia! Which roughly translated to “way to go, big fella!” or something.  They also had a slave auction fundraiser in the lunch room where leering gym teachers bought the comeliest girls and likeliest boys draped in their mother's bed sheets.  Kind of creepy, when you think about it.
But as a student of all things religious, I have since learned a thing or two about it.
Saturnalia is just one of the many festivals common in Europe and elsewhere in the Northern Hemisphere around the period of the solstice.  Unlike others, it is a harvest festival, which seems strange until you remember that Rome not only had a pleasant Mediterranean climate but was in a period of historic warming prior the Little Ice Age, the onset of which helped plunge the continent into the Dark Ages.  But that’s another story.

The public ritual of the holiday was observed at the Temple of Saturn, one of the most important buildings in the Forum.  A lectisternium, a ceremonial couch, was set up before the Temple and the statue of Saturn was unbound—don’t ask me why he was tied up the rest of the year.  A feast was laid out for the god before the couch.
The public ritual and spectacle aside what made Saturnalia especially popular with Roman plebeians and the large population of slaves were the carnival-like traditions.  Social norms of the rest of the   year were set aside.  Private parties and public revelry were the order of the day.  Restrictions on gambling were loosened and even slaves could try their luck at games, many trying to win enough money to buy their freedom.   Exchanging small gifts—saturnalia et sigillaricia—either made by hand or purchased at special holiday markets was a highlight.  Slaves were exempted from punishment by their masters, in theory at least.
The most telling was the turn-about feature of the celebration.  Slaves and common laborers were supposed to be served feasts by their masters and were free to express disrespect.  Sometimes complete role reversal was practiced.
With the rules of public decorum suspended, it was a very good time for wine merchants and public drunkenness was common.  So were sexual hi-jinks, including usually forbidden mixing among classes, master and slave.


Around 250 AD Emperor Aurelian created the new official cult of Sol Invictus, a Sun deity which may have borrowed from the Persian warrior cult of Mithra, which celebrated the return of the Sun on December 25, just after the conclusion of Saturnalia.
This led to the often told tale is that the early Christians, still persecuted, hid their celebration of the Feast of the Nativity during Saturnalia to avoid detection.  The trouble was that the date for that celebration was not yet fixed.  In fact it was often celebrated in the Spring—the lambing season when shepherds would have been in the fields on the lookout for wolves. Even when Christmas was settled on December 25, it was two days after the customary end of Saturnalia but did coincide with the feast of Sol Invictus.  However later Emperors began to suppress the Sun festeval with the rise of Christianity, around 390 AD.  The first written reference to a festival of Natalis Invicti  was the Philocalian calendar of  354.  But a spring celebration of the nativity persisted more generally for another 100 years by which time the festival of Sol Invictus was banned and reduced to a rural folk celebration.
The early church did seem to want to mount a feast or festival that competed with the various pagan solstice festivals and to which locals could adapt some of their beloved customs.  At the same time, the Church went through periods of vigorously trying to stamp out vestiges of those same pagan festivals.  For this reason the exchange of gifts was outlawed through much of the early Middle Ages.

But customs did persist.  Although most of the trapping of Christmas were borrowed from the Nordic Yule, Celtic, and Druidic customs, the cultural influence of Rome’s long occupation of Britain can be seen in the carnival like observation of Christmas there up to the Puritan era   which included the same role-reversals, public revelry, and drinking.  The vestiges of it can be seen in Boxing Day, when masters give presents to servants and often serve them meals on the day after Christmas.