A Fresh but Flawed Heidi Chronicles at Black Box Theater 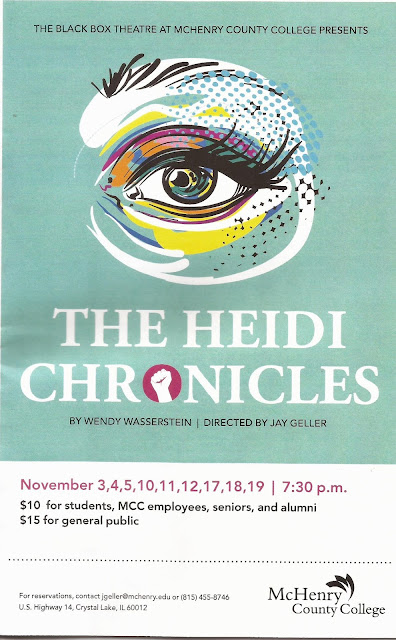 There is something more than a little ironic seeing the iconic feminist set piece The Heidi Chronicles three days after the title heroine’s near contemporary unexpectedly lost the Presidency to a boorish lout and bully.  Perhaps especially because the character and the politician were products of such similar backgrounds as intelligent, highly accomplished women from an elite academic background and high professional ambitions.   Both grew up with the rise of the women’s movement and moved into adulthood in times of tumultuous cultural changes.
The play was mounted at McHenry County College’s more than ordinarily ambitious Black Box Theater under the expert guidance of veteran director and theater teacher Jay Geller who routinely mounts productions that stretch the limited expectations of community college productions.  In fact productions at the Black Box which mix student actors, graduates, and occasional professionals, are consistently among the best stage offerings in McHenry County.
The Heidi Chronicles came close to that standard but fell a bit short for reasons not entirely under the control of the director or the attractive young cast.

Wendy Wasserstein’s 1988 play was highly acclaimed and won both Tony and Pulitzer Prize honors.  Hailed as a feminist masterpiece it became a staple for community and college theaters and has been frequently mounted by urban companies, both professional and earnest small troops.
It is sometimes compared to another acclaimed feminist play, Eve Ensler’s The Vagina Monologues which premiered just eight years later in 1996.  Heidi suffers by comparison.  The Vagina Monologues was a much grittier play and a braver one.  Wasserstein’s play seems frozen in amber by the 25 year time span it documents.  Ensler’s work is fresher for being ever evolving and regularly adding new monologues that reflect current events and taking an expansive world-wide view of women’s experiences.  Heidi’s elite world seems cramped and the conflicted angst of its denizens somewhat shallow as both of the major male characters—the smarmy sometime love/lust interest and the glib gay man best friend ironically point out.
In a lot of way the play represents the obsessions of many of the leaders and shaping thinkers of the Feminist movement, many of whom came out the same Seven Sister School backgrounds and the self-contained world of New York intellectuals.   Even the founders of MS Magazine at first seemed to be concerned mainly with establishing powerful careers, achieving autonomy from reliance on men for validation, and “having it all.”  The struggles of working class women, women of color, or even middleclass homemakers and mommy-trackers who were often cast enemies, seemed utterly alien to this brand of sisterhood.
That was certainly the problem that my deeply feminist wife Kathy had with the production.  She is a working class girl from Chicago, a last-minute high school dropout, young bride then struggling single mom of two who after working since she was 14 finally found a career path in mid-life, got her B.A. and Masters Degrees in years of night classes, and became a respected religious educator.  She found almost no common ground with the characters presented to her and hardly recognized their struggles as Feminist.
Kathy was most deeply offended by Wasserstein’s portrayal of a consciousness raising rap group set in the college town of Ann Arbor, Michigan in 1970, just as the women’s movement was making a sharp, militant turn and flirting with angry separatism.  Urban groups like that were an important part of Kathy’s development and a source of support and encourage.  Here the women are reduced to symbolic stereotypes—the recently empowered housewife, the high school girl victimized by her parents discovery of the sexual revolution, the cultural faddist, and the angry lesbian—in the play’s most comic scene.  The women in it, or variations on them, will show up through the rest of the play in the vignettes of Heidi’s life, all of them highly successful but profoundly disconnected and ambivalent.
So, ok, let’s take the play for what it is and not try and blame it for what it never set out to be.  The play stretches from a high school dance at a toney girl’s prep school in Chicago in 1965 to a New York loft apartment in 1989.  Wasserstein tracks the changes whirling through her episodic play with a heavy reliance on pop music—the kind of soundtrack-of-your-life trick borrowed from innumerable romantic comedies—and a slew of casual cultural references meant to set the audience’s head’s nodding with knowing understanding.
But in 2016, a couple of generations after the play’s blackout, director Geller recognized the inherit problem of staging it for a new audience.  His semi-clever answer was to include a five page glossary of the references in the program ranging from the esoteric Renaissance women painters that art historian Heidi references in her opening lecture, but such jaw-droppingly obvious ones as Richard Nixon and John Lennon whose resignation and memorial service were symbolically coincidental with scenes from Heidi’s life.
Try as they might, the earnest young cast can only glibly reel off the references without always seeming to understand their significance through no fault of their own.
The Friday night audience was the sparsest I have ever seen at a Black Box production—only about 30 people leaving plenty of empty seats in the intimate performance space.  About half were, like Kathy and I, Heidi’s contemporaries.  The rest were student age or just past.  Judging from the reactions, a lot of those references went over the heads of the younger members but elicited knowing but subdued chuckles from us geezers.
By the way, Kathy drew my attention to the absence of men in attendance.  Including myself there were just 5, another older man with his mate, and a young gay couple.  Most McHenry County Trump era men could apparently not be dragged to the theater for a Feminist show.  Friday night is date night, Kathy observed.  Presumably men dragged their women to the action-movie-of-the-moment instead.

Still, the play was not without its charms and rewards.  Emily Piesens was appealing as Heidi—beautiful, brainy, emotionally cut off, confused, and conflicted.  The two male leads were also powerful to the point of scene stealing, which worked most effectively when both show up on a morning TV panel and completely override Heidi.
Sean Potts as best pal Peter Patrone has to overcome being written as too arch, but redeems himself and his character in what is play’s most potent emotional moment as he lashes out in anger and grief as a Gay man who has attended too many memorial services for AIDS victims and calls out Heidi for her blithe self-absorption.
Vince Calucci nailed Scoop Rosenbaum—swaggering, glib, charismatic, exuding unctuous charm with a sincerely thin veneer of idealism and a reservoir of ambition.  He is the bad boy Heidi falls for and can never quite get over although she knows every one of his many faults.  Meant to be a shameless cad, in Calucci’s hands Scoop is none-the-less more human and sympathetic than the parade of Heidi’s two-dimensionally drawn friends.
For me the epiphany of the night came in the first act closing scene where Heidi confronts Scoop at the wedding to the woman he is settling for to facilitate his career.  Heidi is clearly better off without him but can’t quite let go as the lights dim and the two dance as the bride awaits in the ballroom.  It occurred to me that Hillary Clinton—even more talented and ambitious than Heidi—married her Scoop Rosenbaum and stuck with him through triumphs and humiliating shenanigans that would have made Scoop himself blush.
The play ends with Heidi alone in her new nearly empty apartment rocking her newborn child to sleep.  Content?  Well maybe just for this one moment.
That ending proved to be an omen in Wasserstein’s own life.   In 1999, ten years after the closing scene, she gave birth to a daughter at age 48.  Six years later on January 30, 2006 she died lymphoma.  The lights of Broadway dimmed in her honor.