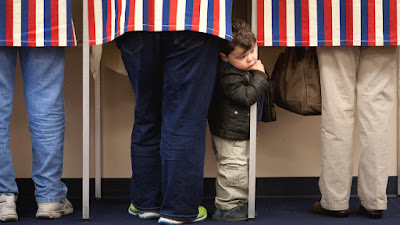 Recently I blogged about how I was inoculated from childhood to regard Election Day and the act of voting as holy and mysterious rituals and obligations.  I still feel that way.  But this year the election is shrouded   with apocalyptic significance and a sense of dread.
This has been no ordinary contest between Republican and Democrats, conservatives and liberals, even between reactionaries and radicals, no matter how passionate the divide or loyalty to the candidates and parties.   There is the overwhelming feeling, shared by both sides, that the very future and survival of the nation hangs in the balance.
After the secret Constitutional Convention ended a lady asked Benjamin Franklin, “Well Doctor, what have we got a republic or a monarchy. “A republic, if you can keep it,” he reportedly replied.  Indeed.  This is the test of whether we can keep it yet.
Oh, I have every confidence in the outcome of the Presidential race.  I expect Hillary Clinton to handily win an impressive majority of the Electoral College and beat Donald Trump like a drum in a wider-than-expected popular vote.  An absolute majority of ballots cast despite the presence of two minor party alternatives and threatened Bernie Sanders write-ins or blank votes cast by disgusted Republicans.  I also expect the Senate to flip, a close contest for a House Majority, and Democratic gains down ballot in dozens of states.
The question is, will Trump and the rabid supporters that he has whipped into a frenzy, accept the results.  After weeks of suggesting the election is rigged and hinting of Second Amendment solution there is more than a whiff of treason and rebellion in the air.  The so-called Alt-right—the polite term the media has opted to use which normalizes dangerous extremism—including gun obsessed militias,  various Ku Klux Klan splinters, and open neo-Nazis have been beating the drum for insurrection hoping to seize the moment.  Now even golf shirt wearing old White guys who can hardly be expected to collect their hunting rifles and march on whatever symbol of Federal power is handy, are routinely caught on video swearing to rebel.   And this morning there have already been scattered reports of gun toting “patriots” patrolling polls and trying to scare or discourage Blacks, Latinos, women, and students from voting.
This is not the first time in American History that there has been a bitterly divisive election which has shifted the paradigm.  The so-called Revolution of 1800 brought Thomas Jefferson and the Democratic Republicans to power, ousting permanently John Adams’s Federalists, which were reduced to a New England rump within a very short period.  They did not, however go down without a final fling—the ironically became the first proponents of disunion and secession a few years later to protest the Embargo Act and eventual war with Britain.  The would-be congress of a break-away New England—the Hartford Convention, fizzled harmlessly and the wave of patriotic pride born of the Second War for Independence—swept the party to permanent oblivion.

But as bitter as the contest between the two old Revolutionary partners was, it was largely conducted at arm’s length and by surrogates in extremely partisan newspapers and the supporters of each side tended to be separated by distance, religion, and class division.  Outside of some street scuffles between partisans of each side on parade through major cities like Philadelphia, New York, and Boston, there was no talk of insurrection.  An embittered Adams slunk out of Washington on the eve of Jefferson’s inauguration after attempting to pack the Federal Courts with his notorious midnight appointments, ending resistance with a petulant whimper, not with a bang.
Of course the Election of 1860 did have more cataclysmic ramifications. A three-way split among the long-in-power Democrats between Northern, Southern, and border state factions allowed Republican Abraham Lincoln to come to power with a minority of the popular vote and a solid block of Northern state Electoral votes.
Southern firebrands had made no secret that they would refuse to stay in the Union if that “damnable Black Republican” was elected.  One by one Southern state legislatures voted to secede and eventually united in as a would-be new nation—the Confederate States of America.  The four bloodiest years in American history are testimony to how well that turned out.
It not that I fear that any state—even bellicose Texas where a resurrection of the Texas Republic had been floated several times in recent years or the near insane Republican governors of Kansas and Main who having nearly destroyed the economies of their states have taken to occasional fantasizing, will rush to secession.  The practicalities preclude it.  Nor do I believe that a rag-tag of guys playing war in the woods, and duffers with shotguns are going to suddenly turn into a credible force that can overthrow a government.  The notion is laughable even if they could entice a few sheriffs, local police, and at the furthest stretch of the imagination some National Guard units to march to their doom with them.
Some right wingers fantasize about an armed coup d’état.  While there are some ultra right officers in the Armed Forces, particularly in the Air Force and Navy and some White nationalists have enlisted and are serving in the hopes of being trained and ready for a rebellion, I don’t believe that any can rely on troops sufficient to actually seize power.  They would be opposed by a majority of officers and the enlisted ranks in loyalty to the Constitution. So you can count those among the fruitless wet dreams of the deluded.

But I am deeply concerned with the possibility of wide spread domestic terrorism, of assassination attempts, and mostly of attacks on Black, Latin, Muslim, LBGT targets in the hope of provoking a violent response.  The dream is to provoke a race war that they will win “because we have all the guns.”
Rack all of that up to paranoia if you will.  It may be that except for an isolated lunatic here and there that nothing will happen beyond a prolonged mass sulk and pout and whatever political sniping they can get away with from weakened positions in Congress and in state and local power.
Worst, probably is that the country will remain deeply divided.  Families, friendships, and all manner of social connections have already been probably irreparably shattered.  The hard core of each side has completely dismissed the humanity of the other.
I don’t want to engage in the false equivalency of the media which enabled Trump and his minions by insisting that every one of his sins was matched in turn by some Hillary deficiency.  It turned out his long history of shady business deals, cheated clients and vendors, bankruptcies, tax evasions, not to mention his overt and horrible racism and misogyny, were overlooked or minimized while every manufactured Clinton scandal was blown up into a huge deal all in the supposed service of even handedness.  The indeed deplorable behavior and aggression of Trump supporters and their total immunity from believing or caring about their golden boy’s transgressions is undeniable.
But liberals and Clinton supporters have been eager to tar all Trump supporters with the sins of the worst.  They have been merciless in mocking and dismissing them as stereotypical toothless hillbillies, knuckle dragging cretins, and superstitious idiots.  Considering that one of the greatest motivations that moved many members of the White working class away from their traditional Democratic allegiance was the sense that the so-called liberal elites scorned and disrespected them.  This is an alienation going back to the 1960’s when many liberals decided that the white working class were all hopeless Archie Bunkers or Joe from the movie of the same name, blue collar bigot who goes on a hippie killing spree.  We have hardly talked to one another for decades and now we have stuck our thumbs in their eyes again.  No wonder they turn a deaf ear to the very good argument that by supporting Republican oligarchs they are voting against their own best interest.

We have created tribal type loyalties that are being passes on generation by generation despite the fruitless waste.  Think of the festering hatred between Ulster Protestants and Catholics with all of its foolish bloody consequences, the ease with which old rivalries resurrected sending Croats, Serbs, and Bosnians at each other’s throats.  We can have a long and ghastly Civil War even if mass armies never take to the field.
Some sort of deep reconciliation and peace work is called for.  But who is brave enough to undertake it?  Who is brave enough even to listen?
On the other hand, there are things today the lift my spirits and give me hope.  The parade of posts on Facebook from Pantsuit Nation and others showing empowered women, many with their children as well as unafraid men—even old white guys like me, plus Blacks, Latinos, and Muslims means that fascism will be smashed.  A new majority is arising.  Now that majority has to be as generous and forgiving as possible and seek ways to bridge common humanity.
May it be so.