What the Fug Just Happened? 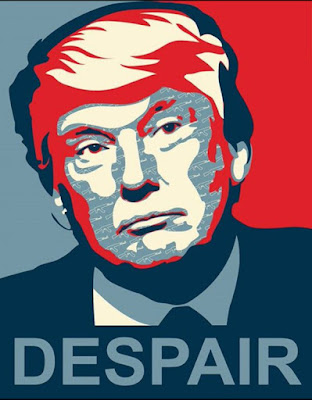 Donald Trump will be President of the United States.  In the immortal words of Margo Channing, “Fasten your seatbelts, we’re going to have a bumpy ride.”
So, what the fuck just happened?
The despicable Rudy Giuliani, of all people, offered one of the best historical insights last night in an interview on MSNBC.  He compared Trump’s victory to Andrew Jackson’s triumph over John Quincy Adams in 1828, a watershed election that road a populist wave and smashed the reigning political establishment. It was the paradigm shift election that I failed to consider in my blog essay yesterday.
Like Trump, Jackson was a popular personality—a folk hero—of a sort that despite being personally wealthy and having adopted the trappings and lifestyle of the aristocratic Southern Planter class, convinced the common man that he was their champion.  In doing so he smashed his own political party—the Republicans founded by Thomas Jefferson—and built on its ruins the Democratic Party.  He ousted a respected and successful incumbent president.  He did it so completely that it took years for a ragged Anti-Jacksonian coalition to form a fragile, unstable, and self-contradictory new opposition party—the largely hapless Whigs.  Jackson had more or less a free hand to pursue sweeping change including the final destruction of the Bank of the United States, the development of the political spoils system to reward supporters and punish enemies, and launch is Indian removal policy.  Each of these was highly popular with the people who elected him, and deplored by the old political establishment and traditional business interests.  It also sharply divided the nation geographically with the South and emerging West in one camp and New England and the Northern states heavily settled by the New England diaspora in another—divisions which persist in some ways to this day.

Of course this comparison isn’t perfect.  Adams was an incumbent.  But Hillary Clinton was running largely as the anointed heir of two term Barak Obama.  Obama leaves office personally popular and with an approval rate north of a majority.  Clinton inherited much of his constituency, buy lost chunks on the left and among socially liberal millennial voters.  Jackson, though a national political outsider, was not only a celebrated and accomplished general, but had a long successful political career as a judge, member of the House of Representatives, military Governor of Florida, and twice a U.S. Senator.  He knew a thing or two about the levers of power.  Trump, on the other hand is completely devoid of any military—unless you credit his prep school ROTC time—elected office, or public service experience.  He doesn’t even have deep or wide political ties or support even in the Republican Party that he seized as a buccaneer’s prize.  More than one old line Republican last night observed that he had dismantled the house that Ronald Reagan built.  His Republican Party, even if it keeps the name, will be as new a creation as Jackson’s Democrats.
This was an electorate that was looking for change, almost any change, the more radical the better.  Bernie Sanders rode that same yearning among variant demographic groups to his surprisingly strong challenge for the Democratic nomination.  His failure to win the nomination bitterly disappointed his followers who saw Clinton as a corrupt trimmer and defender of entrenched elites despite her generally progressive record.  Many were slow to follow Sanders’ lead in rallying behind her.  While most eventually came around, it was largely without enthusiasm.  This morning some of the hard-core Bernie-or-Bust hold outs were busy on line barely concealing a gloating I-told-you-so and smugly asserting a don’t-blame-me posture on the defeat of Clinton and the failure of the Democrats as if their fingerprints were not on the corpse.
Could Bernie have beat Trump?  Maybe.  He was my candidate too, and I had high hopes for a surge that would bring deep progressive and social democratic values to the center stage of American politics.  But could he have broadened his coalition to include the disenchanted and disempowered working and middle class white voters who Trump zeroed in on with laser like efficiency?  That is more doubtful, largely because their resentments were also tied to race, immigration, so-called cultural values, and a distaste for the smart assed seemingly privileged young people who were Sanders’ most visible supporters.  How likely were they ever to jump into bed with those people?

Secondly, could Sanders, despite his spotless record on women’s issues, have mobilized the emotional and zealous support of so many women who saw a long held dream coming true?  Would at least some of those women be just as disappointed and alienated if he had edged Clinton out at the Convention as the Bernie-or-busters were?  You betcha.  And without that ardent female army, Clinton could not have done as well as she did.  She did, after all was said and done, win the popular vote.
The yearning for change was recognized by many, but dismissed by too many, including Clinton herself.  Although she made large accommodations to the Sanders platform and campaigned with him, progressive icon Senator Elizabeth Warren, and the formidable and beloved Obamas themselves, she always seemed to shy away from committing to sweeping change and reform.  She kept arguing for the effectiveness and practicality of incremental change.  It was in her political DNA.  But voters of all stripes were not interested in incremental change and in the end failed to be swayed by the real fear of losing long held gains.  Her best opportunity came with the selection of a Vice Presidential running mate.  In any other year Tim Kane would have been a perfectly reasonable choice—a popular senator from a battle ground state—with a folksy campaign style.  But Elizabeth Warren would have ignited the left and brought most of the enthusiastically home.  And we have seen how effective she can be on the campaign trail.
Still despite these stumbles, Clinton was clearly the favorite to win against a bizarre and erratic candidate with a scandal of the week, a vicious temperament, and a sexist potty mouth.  He repelled many traditional Republicans along with everybody else.  I believe that the polling showing a steady lead for Clinton was entirely accurate up to the last week or so.  She managed to survive innumerable slurs and faux scandals fostered by the false equivalency of the media which seemed to demand tit-for-tat to every revelation of another Trump abomination.  Virtually everyone thought that all of that had been taken into consideration and the sides at settled into a fixed gap.

But that changed rapidly in the last week and a half or so.  This is what I think happened:
Of course there was a lot of other stuff going on, not the least of which was the exposed depth of long smoldering racism, xenophobia, and misogyny lurking in wide swaths of White America, particularly mature and older men who feel their rightful heritage is being stripped away from them.
To save this nation from a grim fate we must find ways to reach out to and reassure these folks that the future—a multi-racial and ethnic future—is not their mortal enemy.  Tough job, but somebody’s got to do it.

Posted by Patrick Murfin at 1:28 PM