What the Fug is Gonna Happen? 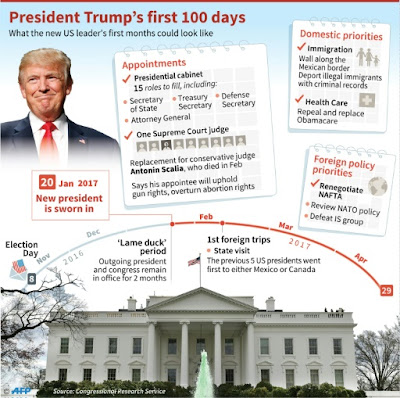 Yesterday we tried to figure out what hit us.  Today we pick ourselves off the asphalt and stare into the tail lights of the bus and wonder where it’s going so damned fast.  What the Fuck is going to happen?
Reading tea leaves and goat entrails is harder than it looks.  And just two days ago I showed what a lousy prognosticator I could be.  But based on the campaign promises of Donald Trump and his Christian domoninist wing man Mike Pence, his now solid control of both branches of Congress, the unleashed passions of his most rabid followers, and the predictable reactions of the world to all of this, some things seem pretty clear.
Of course some optimists and a lot of the traditional Republicans who jumped on board the bandwagon holding their noses believe that all of that was campaign rhetoric and that once in power Trump will surround himself with sensible men—and they will all be men—who will steer a relatively traditional conservative course, and not swing a radical wrecking ball.   I suspect those people are better at self-delusion than divining the future.
In order to reassure and placate the base that elected him, Trump will have to at least try to move on his ambitious and terrifying First Thirty Day agenda.  It will be impossible for him to actually implement it all short of a Cromwellian dismissal of Congress and an attempt to rule by fiat.  Even those most afraid of his most overtly Fascist tendencies do not expect that to happen.  Instead Trump will have to rely on Republican majorities in both houses of Congress where he might have less-than-unanimous support for some of his most outrageous proposals like banning all Muslim immigration, building an enormously expensive and disruptive Southern border wall, or preparing to deport millions of undocumented immigrants.
Other stuff should move pretty quickly with few options for the Democratic minority in the Senate to stop or slow it down.  Republicans might now be comfortable changing certain procedural rules that the minority could use that they left intact for fear that they might become a minority under a Clinton presidency.  Certainly they plan to drive a steam roller where ever there is no danger of any GOP defections.
First up would be the long dreamed of Affordable Healthcare Act—Obama Care—revocation.  Since neither Trump or the GOP has been able to come up with a coherent replacement except for vague promises that a few popular provisions such as banning pre-existing condition exclusions in private health insurance and allowing adult children to stay on their parent’s coverage until 26, millions of Americans are likely to abruptly lose health insurance, some in the midst of critical treatments and the whole healthcare system will be thrown into chaos.  Even those popular exceptions are in danger if the hard core Tea Party holdovers in Congress and the bought-and-paid for stooges of the insurance industry who have been critical of them threaten to hold up the whole shebang until they get their way.


Whoever gets the job, Trump has laid out a bellicose foreign policy that instantly turned the United States into a pariah nation as soon as the stunning election results were announced.  Much of the world was already alarmed by America’s knee jerk preference for military action.  But most of the West, at least, still viewed this country under Barack Obama as a force for good in the world.  Even our oldest allies have no illusions that it will remain so under Trump.  Maybe especially our oldest allies.
Trump went out of his way several times during the campaign to make disparaging remarks about the corner stone Western alliance, NATO and hinted that under his presidency the United States may feel under no obligation to come to the defense of Eastern European NATO members because “other countries have not paid their fair share of American expenses in defending Europe.”  This has shaken European confidence to the core and Trump has made no move to repair the damage.
On the contrary, he seems to be moving ever closer to Russian President Vladimir Putin who he has repeatedly praised as a strong leader who he admires.  Putin has frequently returned the compliment and virtually endorsed him for President.  In fact when the Russians recently tested a new ICBM capable of carrying enormous nuclear payloads and reaching every corner of the U.S. he laid the blame for the development at the feet of Clinton and Obama who have been “hostile” to Russia.  Several times he has resurrected talk of nuclear war.   Russia’s involvement in hacking Clinton and Democratic Party e-mails and releasing them though Wikileaks is now well documented, as was Russian involvement in the sophisticated denial of service attacks a couple of weeks ago that crashed American social media and business servers and was was considered a shot across the bow in a possible cyber war.
Trump for his part publicly played coy about his Russian connections—which included previous business dealings, investments, and loans—and publicly invited the Russians to come up with more e-mails that would “send Hillary to jail.”  Just yesterday the official Russian press acknowledged that the Putin government had been in contact with the Trump organization throughout the campaign.  For his part, Trump has announced plans to meet one-on-one with Putin before the inauguration, supposedly to coordinate action against ISIS in Syria.
Whatever the real relationship between Putin and Trump, the Russian knows how to play Trump like a drum by stoking his vanity and pretending to see him as a powerful peer on the world stage.  Europe worries that Trump will give the Russians a pass on a renewed military push to complete its de facto re-annexation of Ukraine, were Putin has been massing troops on the border for more than a month.  Some fear that his gaze and reach will then turn to the small Baltic republics—Estonia, Latvia, and Lithuania—which he accuses of abusing ethnic Russians.  That’s the same song Hitler used to annex Czechoslovakia and invade Poland.
Meanwhile, Iran, which has suspended its nuclear arms program in a breakthrough agreement with the Obama administration, is also on edge.  Trump said he would tear up that agreement and get tough with Iran to “permanently end the nuclear threat.”  He was vague on how he would do this, but has broadly hinted that he would not stand in the way of an Israeli pre-emptive nuclear attack that Obama always blocked and that the world fears.  Iran now, in fact, has every impetus to rapidly resume its nuclear arms program as a deterrent to Israeli or American attacks.  It may also be tempted to resume sponsoring terror attacks in the West that it had almost completely dialed back.
Isis, who’s territorial control swaths of Syrian and Iraqi desert, has come under increasing attack, and which seems to have crippled the ability to launch the kind of complex attacks on Western targets for which it became known, is cheering Trump’s virulent anti-Islam rhetoric.  It is the best training propaganda possible for recruiting the kind of home grown, self-organized terrorists who now mount the majority of attacks without the need of hands on management or control.
Where ever you look in the world Trump’s bull-in-the-china-shop approach to foreign policy has made the world a more dangerous place and isolated us even from our long time allies.
I could go on about other perils foreign and domestic presented, but you get the depressing picture.
The next questions is what the fuck do we do about it?  And we will take that up in future entry.  Stay tuned.

Posted by Patrick Murfin at 3:28 PM