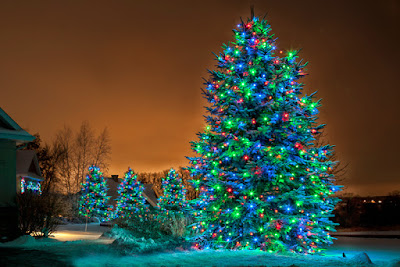 Note:  This piece began life as my draft of an annual Christmas message from Oaktree Capital, the small Registered Investment Advisor where I toil in a basement home office in Woodstock, Illinois four days a week as the Communications Manager—a title much grander than the work involved.  Edited by my boss Robert S. Jackson, who is also a member of Tree of Life UU Congregation in McHenry, it went out in a much more truncated form.  But why waste my verbiage?

One of the delights of the season is strolling down a brisk winter street and taking in the sparkling lights adorning the homes, trees, or busy shopping districts. Or sitting in a darkened room while the rest of the household is fast asleep and just gazing at your glowing tree.  The mind wanders, remembers, and is even filled with a touch of long forgotten awe.
This is the story of those holiday lights, their origins, meanings, and development into what we see today.  It encompasses the breadth of human experience—our creature urges; our communities; earliest religious impulses; philosophy, our attempts to make sense of it; history; culture; and even mundane technology. To begin at the beginning—the very beginning—ancestors of us homo sapiens only a few millennia down from the trees, obtain fire, first by learning to preserve wild fires and later, another several millennia, to spark their own.  Life changes.  The dangerous, dark, and cold night is held at bay like the predators lurking just out of the flickering glow.  No longer must our almost human ancestors huddle in the dark.  Around the fire before sleep comes there is time.  Time to watch the ever fascinating flames and flying sparks, eventually—more ages—time to find ways to share the happenings of the day, not just grunts, but words, real words and from words stories.  And from stories wonder and myth.  Fire—language, awe, religion!
No more dens like animals, no more caves.  Huts, villages of huts.  Many fires.  Cooking fires, roast meat from the hunt, roots, and forage.  Grain!  Bread!  Harvests and hearths!  Now there are gods to be thanked or assuaged.  Temples!  And in the temples, sacred fire, caldrons, braziers, torches, candles.  The sacred Menorah of the Holy of Holies.  Gods now and the sorting of the light and dark.  The search for meaning.  The realization that one cannot exist without the other.  That both, after all may be sacred.  Cathedrals! Vast spaces and soaring aspirations.  Awe made manifest in stone. And even the poorest peasant can, with sacrifice, light a candle to add his light, his tiny light, to the many others flickering on the altar for the Glory of God.

As people became more agricultural, the marking of seasonal change became more and more important, especially in the North where long bitter winters after the harvests and hunts were over threatened starvation.  Marking the Solstice which came early in the cold season but which promised that the Sun was indeed returning to ultimately vanquish dark was annually a major milestone.  From pyres in Siberia to Yule logs in Norse lands to the bonfires lit to beckon the Sun on hills and crags by Druids the people sang and danced around the light of sacred flames.


With the coming of Christianity the feast of Christ’s Birth was attached to the Solstice period and the old customs adopted and modified where they could not be squelched.  The symbolism of the hope born of the Son of God could with some dexterity be adapted to the hope of the return of the Sun.  Observations moved inside the Cathedrals and into the Manor homes of the lords.  Yule logs now burned in Great Hall hearths.  Extra candles dazzled on altars.  The vast majority, the peasants, might be allowed a glimpse at the splendor at Mass where they stood in the back and recesses out of the gaze of their Lords.  But they were too poor to bring the light into their own hovels, which were illuminated only by what small fire they could keep kindled in their single rooms, fires no more festive on Christmas than on any other day.

Across Europe came the rise of the cities, literal islands of light shining the waning Dark Ages.  No longer just nobles, priests, knights, and serfs.  Tradesmen and merchants, journeymen, and apprentices, Guilds arose.  Within the city walls between palaces and shacks there were homes small and large and people in them who as much as they were able strove to adopt the ways of courts.  Candles—expensive, yes—and windows—not too many or two large because they were taxed.  What a display of new wealth to burn a candle festooned with a sprig of holly all Christmas Eve in the window, a signal that the Christ child was welcome here.  One of the oldest symbols of the spreading celebration which now included outside of Church a public revelry, mummery, and offering songs for libation where those candles burned.  Wassail and Merry Gentlemen.


Evergreens had been a symbol of the solstice season since ancient times.  Romans festooned their homes with greens at Saturnalia, the festival just after the Solstice.  The Norse used fir boughs and both the Germanics and Druids used holly and mistletoe.  The later the English took to making wreaths and garlands to decorate their homes, intertwining holy with ivy.  But it took the Germans to bring a whole fir tree inside.  Some say Martin Luther was the first to light the tree with candles in its branches on Christmas Eve.  Probably not, but a nice story and the custom did spread first in Lutheran areas before being adopted in the rest of the Christmas loving German states.
The first trees put up in the America were probably erected by the Hessian and other German mercenaries during the Revolution.  Perhaps there was one or two up for the Christmas Eve Party at Trenton that left the troops there so groggy that General Washington was able to surprise and whoop them the next morning.  Many Hessian prisoners of war decided to stay and settle in Pennsylvania after the war and slowly spread the custom in the Middle States.

But the Trees did not really take off until a rebellion against the Puritan ban on Christmas celebrations took hold in the early 19th Century largely spurred on by New England Unitarians.  In 1835 the Rev. Charles Follen, a German immigrant erected a candle lit tree for the children of his church in Cambridge, Massachusetts.  The custom spread widely with remarkable speed, especially after illustrations of the tree that Prince Albert put up in the palace for Queen Victoria and their children in 1845 appeared in American magazines.  Middle Class families rushed to ape the Royals.  By the eve of the Civil War trees were common across the North, Mid West, and upper South.  By the Gilded Age they, along with the evolving Santa Claus, were ubiquitous.  Modern American Christmas was taking shape.


Of course dead trees with burning candles on their limbs in cluttered Victorian parlors were rife with peril.  That why trees were usually put up on Christmas Eve and taken down the day after Christmas.  Buckets of sand and water were on hand just in case and were often used.  Fire brigades were none-the-less busy on the holiday.
Only three years after Thomas Edison got his first patent for the incandescent electric lamp, and the very same year that he installed dynamos in New York City that powered a few blocks of street lighting and service to a handful of wealthy homes, Edward H. Johnson, Vice-president of the Edison Illumination Company had an electrician hand wire 80 white and red bulbs to a tree in his fashionable home.  It wasn’t simple.  Neither outlets nor plugs had yet been invented.  The lights had to be wired into the home electrical feed.  If a bulb went out, whole strings did and since screw bases also had not been invented the electrician had to come back, find the bulb and hand solder a replacement.  But the effect was dazzling.  The press covered it with awe.  Johnson could safely leave the tree up for a few days and hundreds came each night to gape at it through his windows.


The cost was enormous, however, and hardly anyone did it again at home for years, although some department stores paid to have it done to attract shoppers.  In 1895 Grover Cleveland had the first electrically lit tree in the White House.  In 1903 General Electric brought Christmas tree lights to the reach of upper middle class families with the introduction of the first commercial sets—strings of eight colored lights wired in series and sold in boxes with several strings and extra bulbs.
By the 1920’s lights were developed that were safe to use in all kinds of weather outside.  Calvin Coolidge lit the first outdoor National Christmas Tree on the Mall covered in 3,000 lights in 1923.  In the boom years of the Roaring Twenties Christmas lights spread and their use was expanded to decorating house exteriors as well as city shopping district streets.
But in 1930 more than half of Americans were still lighting candles on their trees.
Like Christmas popular music and movies, a hungry nation craved lights after the long years of hardship of the Depression and separations of World War II.  By the ‘50’s almost every home, no matter how humble was lit.  And trees stayed up longer and longer year by year.  Now many homes erect them just after Thanksgiving and leave them up deep into January.

In the late ‘50’s lights began to be wired in parallel so that a whole string would not go out with one bad bulb.  Mini lights, first advertised in the U.S. as Italian Lights, began replacing larger colored bulbs not only on trees but in street decorations.  Innovations continue including pre-lit artificial trees, florescent and LED lights, and fiber optic lights.
The world seems ablaze in holiday lights these days, yet they never cease to delight.
So turn off the house lights and watch the tree.  But remember there is more to them than first meets the eye.