A tip-o’-the-hat today to Paula Brazill Wallrich who included mention of the Festival for the Souls of Dead Whales in her daily Facebook post of such commemorations.  I found it this morning just having posted my blog entry Eleanor Roosevelt’s Triumph—The Universal Declaration of Human Rights.  As something mysteriously does when I am confronted with these calendar coincidences, something clicked in my head.  After a bit internet research on the fly, presto!  An instant poem.
I haven’t the foggiest idea if it is any good.  Just throwing it against this wall to see if it sticks. 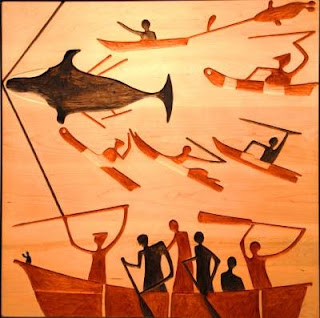 It says right here on this almanac round up
that today, December 10,
is the Festival for the Souls of Dead Whales.
It’s supposed to be an Alaskan Inuit thing.

Well, maybe.
Maybe not.
Someone checked it out.

Seems like the people around Barrow—
pardon me now—Utqiaġvik—
never heard of it.

The Inuit living in the traditional way
take most of their diet
from the bowhead whale—
meat, blubber  and organs—
and use every damn last scrap
of skin, bone, and sinew.

Each hunter, they say,
has his own prayers and rituals
of thanks and respect.

Three celebrations each year
show respect for the souls of the animals,
bring luck to the hunt,
to give thanks to the spirits
of the whale who have given themselves
as food for the People.

The men are the hunters,
but the sea beasts give themselves
to the women,
the keepers of the hearth and home,
who must honor and venerate
their spirit.

Then the spirits having dwelt
in the homes of the People
return to the sea to tell their brothers
how they were honored.

But, no, the Inuit of Barrow say,
we have not heard of
the Festival for the Souls of Dead Whales.

But maybe in remote villages,
some call a community ritual
held in the unending night
when the sea is frozen thick,
the wind howls,
and the bowheads
are safe from the rifles and harpoons
of the hunters,
by this particular name.

Perhaps some anthropologist
with notebook in hand
simply gave the name
to a nameless, timeless
thanksgiving.

Like another celebration
marked on today’s calendar
the Festival for the Souls of Dead Whales
is a mere rumor
honored mostly in the breach.

Posted by Patrick Murfin at 8:29 AM