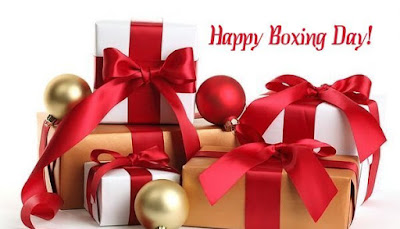 This year we Yanks get a taste of Boxing Day.  Since Christmas fell on a Sunday this year, today is a legal holiday—just like Boxing Day in Britain and the scattered remnants of her former Empire where December 26 is a treasured tradition and a legal holiday.  It traditionally falls on the day after Christmas, December 26.  We will even share one of the biggest activities of the day—shopping.  For some years the day after Christmas has been the busiest of the year in brick and mortar stores where gift recipients hit the refund and exchange desks and spend the gift cards they got.
The celebration in the British Isles has its roots with the aristocracy, gentry, and wealthy townsmen and their households.  The master would give presents to his servants and staff, who would also have the day off work.  Sometimes the master’s family would even serve meals to their inferiors!  Needless to say, this custom was very popular among the servants, and sometimes observed resentfully by those unaccustomed to either manual labor or generosity.
It is also a remnant of an ancient tradition that may—or may not—go back to the Roman celebrations of Saturnalia and Sol Invictus, when there was a carnival-like turn around with slaves lording over masters for a day.  The tradition continued into the Middle Ages on into Elizabethan times, where it took on the wild excesses of street revelry.

That revelry doomed the whole season when Oliver Cromwell and his Puritans took over.  Eventually, Boxing Day restored a controlled dollop of the old festival.  The Church of England gave a religious cover to the day as St. Stephen’s Day.  Stephen was the Deacon of Jerusalem the earliest days of Christianity known for his charities to the poor.  He was also the first Christian martyr, stoned to death for allegedly preaching the Trinity in the Temple.
The familiar carol Good King Wenceslas is a St. Stephen’s Day song meant for street begging.  In Ireland, the day is still officially called St. Stephen’s Day.
It is also known there as Wren’s Day.  Boys in homemade hats and costumes carry a caged wren—or sometime a dead one pierced by a holly sprig—proclaiming it the king of the birds and begging for treats.  Once a fading country custom, in the cities men now re-enact it—often on a pub crawl.

In the Bank Holidays Act of 1871, Parliament recognized Boxing Day as a Bank Holiday—an officially recognized public holiday.  While time off from work was not originally mandatory, but has become nearly universal.
The holiday spread across the Empire and is still official in Canada, Australia, New Zealand, and other Commonwealth countries.  In South Africa it was re-named The Day of Goodwill in 1994.
Today small gifts are still given trades people and service workers, but in Britain the day has become all about shopping.  It is the biggest shopping day of the year and has been compared to American Black Friday, the day after Thanksgiving.  Stores mark the day with huge sales.

It is also a day of sport.  Football—that’s soccer Americans—and Rugby leagues hold full schedules of games, teams usually playing their most serious rivals.  There are also prestige horse races and the country gentry mount fox hunts—these days due to a bitterly resented law, sans fox.  The toffs are no longer allowed to chase real fox, but still get to ride to the hounds chasing a scented bait.
So for my friends across the Pond and around the world who celebrate, happy Boxing Day!

Posted by Patrick Murfin at 8:23 AM