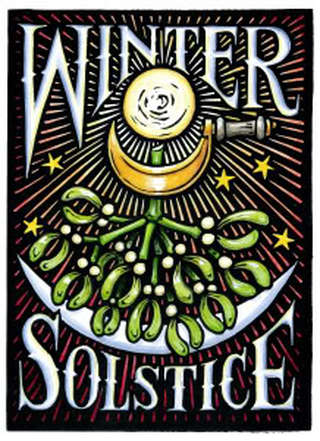 In the United States the exact moment of the Solstice as defined by scientists—when the sun is shining farthest to the south directly over the Tropic of Capricorn—occurred at 4:44 am Central Standard Time today.  You can figure out its arrival in your neck of the woods. The fact is that last night was the longest night of the year and today the sky will begin to grow light earlier each day.

In most so-called pagan traditions around the Northern Hemisphere there were two ways to celebrate the Solstice.  Some lit fires in the darkest night to summon the return of the sun.  Others gathered at dawn to in some way capture the first light of that return.  The latter often involved human made structures by which that light would strike a significant stone or altar.  Think pyramids in Egypt and the pre-Columbian Americas, Stonehenge, Greek temples, medicine wheels, certain Medieval Cathedrals, and far simpler wooden structures in Northern Europe and Siberia. 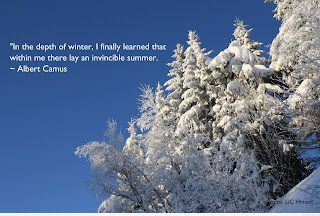 Either way, those who observe or re-create such rituals have found a way to do so.

Even if you do not observe the pagan doings—or shun them as the devil’s work—chances are that you to have been or will be celebrating the solstice yourself.  Let the following recycled post explain.
Buried in traditional folklore, swathed in symbolism, and steeped in metaphor, Christmas and Chanukah share the same impulses as Yule and its Celtic and ancient British cousins, Meán Geimhridh and Meán Geimhridhh beloved by contemporary neo-pagans of one stripe or another.  At their core there was in each of them a physical or metaphorical re-kindling of the light at the darkest hour of the year offering a glimmering of hope at a time of cold and starvation.
Archeological evidence shows that the event—the shortest day and longest night of the year, when the sun’s daily maximum elevation in the sky is the lowest—was marked, often using physical constructions to capture the rising sun, in Neolithic times across widely separated cultures in Europe, the Near East, Asia, and North America.  Stonehenge is just the most famous example.
While the trappings of Christmas—the Yule log, the holly and the ivy, the Christmas tree, mistletoe, wassailing and other customs are commonly known to be borrowed from pagan celebrations, the metaphor of the birth of the Son, bringing light and salvation to the world is often overlooked.  Among still nervous orthodox Christians, drawing parallels to pagan belief is still actively discouraged. 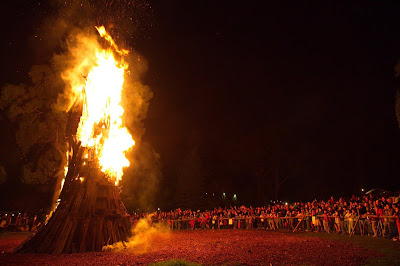 The early Church actively squelched efforts to confabulate the Feast of the Nativity with the Festival of Sol Invictus, introduced to the Roman Empire in the Third Century under the Emperor Elagabalus.  It was a religious revolution that briefly upended Jupiter as the primary Roman God and put in his place the Invincible Sun, which combined the characteristics and cult practices of several sun gods including Syrian Elah-Gabal, the Greek Apollo, and Mithras, a soldier god of Persian origin.
The feast was set on December 25, during the Roman holiday period following Saturnalia.  Later, under the Emperor Aurelian as Christianity grew in influence and importance, attempts were made to incorporate worship of the Christ child into the cult as an incarnation of Sol.
When the Church became ascendant in the Empire, it did all it could to squelch the festival, but like many popular pagan customs, it was so integrated into many daily lives that it inevitably influenced how Christmas, by then assigned to the same calendar day, was observed.
Well more than a millennium later the English poet Christina Rossetti, a member of the Pre-Raphaelite movement, and a devout Christian drew the clear connection between Christmas and solstice in her poem In the Bleak Midwinter.  Popularized after her death and set to music to become what is considered by many critics as one of the most beautiful of carols.

In the Bleak Midwinter

Our God, Heaven cannot hold Him, nor earth sustain;
Heaven and earth shall flee away when He comes to reign.
In the bleak midwinter a stable place sufficed
The Lord God Almighty, Jesus Christ.

Angels and archangels may have gathered there,
Cherubim and seraphim thronged the air;
But His mother only, in her maiden bliss,
Worshipped the beloved with a kiss.

What can I give Him, poor as I am?
If I were a shepherd, I would bring a lamb;
If I were a Wise Man, I would do my part;
Yet what I can I give Him: give my heart.
I think I will dispose of the obtuse metaphors and with those old pagans—and the smug new ones—kindle some small fire of hope and prayer amid the dark and cold.

Posted by Patrick Murfin at 8:54 AM