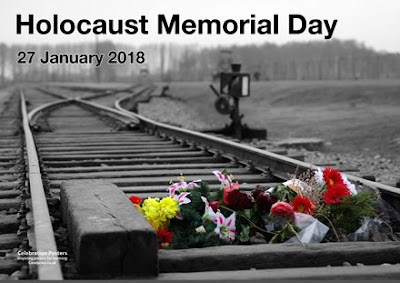 Today is International Holocaust Remembrance Day.  It will be observed—celebrated is certainly the wrong word here—in ways big and small, significant and trivial in many places across the world.  The commemoration comes on the anniversary of the liberation of Auschwitz-Birkenau death camps in Poland by the advancing Red Army on January 27, 1945.  American, British, Canadian, and other Allied Forces liberated other camps, but Auschwitz was the pinnacle of efficiency for the Nazi industrialization of mass murder.
On the sixtieth anniversary of the liberation the United Nations General Assembly held a special commemorative session.  The following November the General Assembly created the memorial day, which was first observed in 2006.
In November of 1944 as the Red Army advanced from the East and the Allies pressed on the Western Front, SS Chief Heinrich Himmler ordered the beginning to the eradication of evidence of death camps in Poland.   Gassing operations were suspended and crematoria at Auschwitz were ordered destroyed or, in one case, converted into a bomb shelter.  As things got worse, Himmler ordered the evacuation of the camps in early January directing that “not a single prisoner from the concentration camps falls alive into the hands of the enemy.”

On January 17, 58,000 Auschwitz detainees were set on a death march  west towards Wodzisław Śląski. Approximately 20,000 Auschwitz prisoners made it to Bergen-Belsen concentration camp in Germany, where they were liberated by the British in April 1945.
But that left over 8,000 of the weakest and sickest abandoned  with scant supplies.  The Red Army 322nd Rifle Division arrived 10 days later to find 7,500 barely alive and 600 corpses lying where ever they finally collapsed.  They also found much evidence of the greater crimes Himmler had hoped to hide—370,000 men’s suits, 837,000 women’s garments, and 7.7 tons of human hair. Coming in the midst of the Yalta Conference and other war news, the liberation received scant news attention at the time.  And the Soviets, who were at best ambivalent at the highest levels about what to do with the liberated Jews, did little to publicly celebrate their role in the liberation, at least at first.

It was only after survivors reached the West and eventually Israel as refugees, that Auschwitz emerged as a special, horrific symbol of the whole Holocaust.