The Very Modest Bow off the First Winter Olympics


Four years ago the world was getting ready for Vladimir Putin’s personal Winter Olympic games oddly centered on the semi-tropical Black Sea resort of Sochi.  Before the games even started they were mired in controversy over Russia’s repressive anti-Gay laws and policy, threats of terrorism by disgruntled Caucus Muslims, and long held suspicion of the wide-spread doping of its athletes.  Despite shockingly poor conditions in the Olympic Village and in the hastily constructed “luxury hotels” for the press and international tourists, the games were watched by millions around the world, including a devoted following on NBC and its associated cable channels, a huge boost to the floundering Network.

Subsequently the doping scandal broke wide open, Russian athletes were stripped of medals, scores of them plus coaches, doctors, and officials were banned for life.  Finally, in a humiliating blow on December 5, 2017 the International Olympic Committee (IOC) announced that the Russian Olympic Committee was suspended for the 2018 Games in Pyeongchang, South Korea. Individual athletes who qualified and can demonstrate they have complied with the IOC’s doping regulations will have to compete as “Olympic Athletes from Russia” under a neutral flag and with the Olympic anthem played in any medal ceremony.
The XXIII Olympic Winter Games in Pyeongchang set to open on February 9, has its own problems—chief among them the looming threat of nuclear war in a drawn out pissing contest between two tiny dicks—the latest north Korean lunatic despot and the erratic, unpredictable and ego-driven occupant of the White House.  Meanwhile the two Koreas, who were lobbing equally bellicose rhetoric and threats back and forth a few months ago, have agree march together under the Korean Unification Flag during the opening ceremony and a Unified Korea women's ice hockey team will also compete under a will march together under the Korean Unification Flag during the opening ceremony. A Unified Korea women’s ice hockey team will also compete under a separate IOC country code designation—COR).  In all other sports, there will be separate North Korea and a separate South Korea teams. 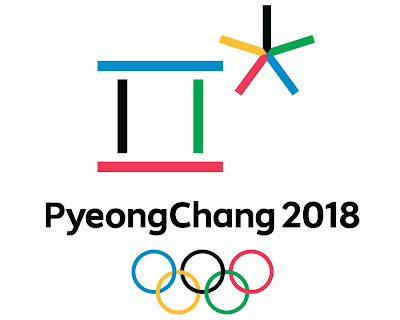 This arrangement has reportedly enraged the Cheeto in Charge in Washington who believes it undercuts his aggressive and bellicose stand against the North.  It has shaken relations between the South, which would bear the brunt of any war with the North, and the U.S. which has thousands of vulnerable troops utterly dependent of South Korean support south of the Demilitarized Zone.  At one point, Trump even considered banning the American team from the games a la Jimmie Carter’s boycott of the 1980 Summer Games in Moscow.
Another controversy has developed over the designation of Vice President Mike Pence to head the American Delegation to the Olympiad.  Pence, a right wing religious zealot and fervent anti LBGT bigot, has drawn the wrath of the team’s first openly gay athlete, figure skating star Adam Rippon.  Pence is wildly unpopular internationally as well just coming off of a Mid-East tour in which he promised to move the  U.S. embassy in Israel to disputed Jerusalem.  He is also despised for his boss’s characterizations of Haiti, Honduras, and all of Africa as shithole countries.  To top it off Pence just announced that he was going to the games to personally prevent the North Koreans from “hijacking the Olympics for propaganda.”
And one other thing, a group of animal lovers is now promoting a boycott of the Games because, “the Koreans think dogs are food.”
Despite all of the brouhaha unless the world ends as cinder, I expect the upcoming games to be as popular as ever.
The origin of the games was, by comparison, very modest indeed.
On January 25, 1924 athletes from 16 nations gathered at the foot of Mont Blanc in Chamonix and Haute-Savoie, France for an International Winter Sports Week.  The event was considered by its host, the French Olympic Committee to be an informal extension of the Olympics Games held that summer in Paris.  It was in response to a clamor, particularly by Nordic countries for an international venue for amateur winter sports.
It was only after the conclusion of the successful games that the International Olympic Committee (IOC) decided to formally inaugurate the Winter Games at their meeting in 1925, that they retroactively proclaimed the Chamonix games the I Olympic Winter Games.  Thereafter the games would be held every four years in the same years as the Summer Games—interrupted by World War II—until 1994 when the current schedule or holding the games two years after the last Summer event was adopted.
The French event was not, however the first time some winter sports were part of Olympic games.  Figure Skating had been an Olympic event in both London and Antwerp, and Ice Hockey was contested in Antwerp on indoor rinks.  Obviously those events which had to be held outdoors could not be accommodated in a normal Olympic schedule.

The first games were totally dominated by Nordic teams.  Norway won four Gold Medals and 17 total medals, Finland had four Golds and 11 total.  The United States only took Gold in Speed Skating, a very distant Silver in Hockey, Silver in Lady’s Figure Skating, and a Bronze for Men’s Ski Jump.  But that was better than the hapless home team, despite fielding the second largest number of athletes.  The French won just three Bronze medals, one of them not actually awarded until 2006.
Curling had been presented during the games, but was not considered an official sport.  In 2006, the IOC retroactively awarded medals to the 1924 curling teams after an appeal on behalf of the victorious British by a Glasgow newspaper.

The Curling medals were not the only ones awarded tardily.  When officials in 1974 discovered a miss entered score in a ski jumping event, American Anders Haugen was elevated from fourth place to third and the 86 year old athlete finally received his Bronze.
The last medal presented during the competition was awarded to a sport that was not even contested during the games.  The French Olympic Committee presented a Gold Medal for alpinisme to Charles Granville Bruce, the leader of the expedition that tried but failed to climb Mount Everest in 1922.
Athletes at the games competed in 16 events in 9 sports—Bob Sled, Curling, Ice Hockey, Military Patrol, Figure Skating, Speed Skating, Cross Country Skiing, Nordic Combined Skiing, and Ski Jumping.
In Figure Skating Sweden’s Gillis Grafström became the first—and last—individual to successfully defend a Gold Medal won at a previous Summer game, Antwerp in 1920.  He would go on to notch a third win in 1928 and Silver in 1932.  On the distaff side 11 year old Sonja Henie skated for Norway.  She finished last but became the darling of the competition.  She would go on to win the next three consecutive Gold Medals, a career as one of the highest paid movies stars in Hollywood, and the first ice show queen.

Then there was Ice Hockey.  The Canadians, like Grafström defending Gold won at Antwerp, achieved the most devastating complete domination of an event in Olympic history, Summer or Winter.  They finished their qualifying round with 4 wins, and a total score of 110–3 against Switzerland, Czechoslovakia, Sweden, and Great Britain then breezed to a win topping the U.S.  This domination continued through most of early Olympic history.  The Canadians won six of the first seven Gold Medals.  Frankly, the whole country has had a swelled head and been a dick about this ever since.
All in all it was an exciting and successful week of competition.  Unlike the enormously expensive Summer games that year in Paris, the winter events even turned a modest profit.  They helped popularize winter sports in Europe and North America.  Not a bad debut.
Posted by Patrick Murfin at 2:00 AM