The Turds Will Rise from the Shitholes—New Murfin Verse 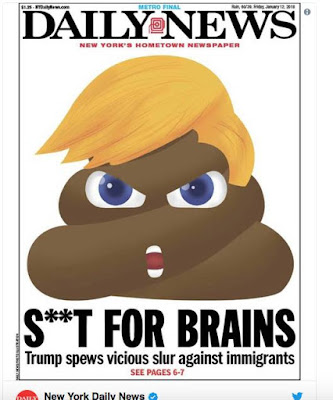 The Cheeto in Charge bluntly revealed the depths of his racism and openly flaunted his reverence for white privilege in a bi-partisan meeting.  He did not speak in veiled or code words as in the past or even with any wink-and-nod deniability.  “Why do we need more Haitians? Take them Out!... Why are we having all these people from shithole countries come here?” he said adding Salvadorans and Africans to the list of those he wants excluded.  Almost plaintively he wondered why we can’t have immigrants from nice countries like Norway.
The remarks came in a meeting to discuss an immigration deal that would have restored protection for Dreamers—those brought as children to the country but have grown up and made lives here in exchange for 50% reduction of legal immigrants under the lottery system and some adjustment to quotas from various countries.  Democratic Senator Dick Durbin of Illinois and Republican Sen. Lindsey Graham had worked out the compromise that seemed to have a chance of passage.  Earlier the Resident had signaled support for the compromise.  Issues over funding for his heralded wall were still to be ironed out, but even there administration sources hinted that he had discovered that a physical wall might not be necessary for the entire length of the border.

The meeting broke up acrimoniously and Democrats in attendance made sure that the crude remarks were quickly reported to the Washington Post and other outlets. Within hours the shit hit the fan.
Durbin, Graham, and other Congressional leaders in the delegation to the White House believed they would be meeting privately with Twitterer-in-Chief and that a deal was in the offing.  Instead they found that Administration’s designated White Nationalist and Joseph Goebbels doppelganger Stephen Miller had brought in rabid Republican anti-immigration fanatics such as Representative Bob Goodlatte of Virginia and Sen. Tom Cotton of Arkansas to “shore up the President’s spine.”  They found Trump belligerent and bellicose from the beginning of the meeting and reverted to campaign mode nativism on steroids.
By then the wavering pumpkin was also feeling the heat from troglodyte right wing commentators including Anne Coulter, Lou Dobbs, Tucker Carlson, and raver Alex Jones who warned him that his base would abandon him if he caved on immigration.  So perhaps the raw and explicit language was a desperate direct appeal to the stereotypical Joe Six Pack racist ranting at Fox News from the corner of the bar.
Condemnation was swift and overwhelming not only from Democrats and immigrant communities, but from most of the respectable press including Conservative outlets and even the loyal Trumpistas at the Wall Street Journal.  World-wide condemnation mixed with open ridicule.  Even some Republicans expressed modest chagrin at the blunt and salty language, but some of them seemed more concerned with the scatological content than the racial slur.
At first the White House did not even try very hard to walk back or flatly deny the statement. The notorious Press Office issued a statement praising their boss for using blunt language to attack Democrats who wanted to sponsor “open borders, drug dealers, and terrorists” while saying that the words reported in the Post were not the exact words he used.
But by the next day the uproar had grown so loud that tiny fingers flew over his cellphone to Tweet “The language used by me at the DACA meeting was tough, but this was not the language used. What was really tough was the outlandish proposal made - a big setback for DACA!” and “Never said anything derogatory about Haitians other than Haiti is, obviously, a very poor and troubled country. Never said ‘take them out.’ Made up by Dems. I have a wonderful relationship with Haitians. Probably should record future meetings - unfortunately, no trust!”

Hours later, Sens. Tom Cotton and David Perdue of Georgia fell all over themselves issuing a statement that they “do not recall the President saying those comments specifically” — but conspicuously didn’t outright deny that he said them.  Most other Congressional Republicans fell silent and spectacularly unavailable for comment.
Sure enough, at Tucker Carlson and others predicted, right wing social media accounts suddenly erupted with cheers for their favorite racist oligarch and doubling down on his rhetoric while salting their rage with violent threats against.
On Friday Rex Huppke, contract reporter in the Chicago Tribune wrote in an article that soon went viral.
What did you say when President Donald Trump referred to Haiti, El Salvador and some African nations as “shithole countries”?
What did you say when the president of the United States followed that comment by suggesting he’d rather see more immigrants from countries like Norway?
Whether now or in the future, you will be asked this question: What did you say?
This is my answer to that question.  It was penned in haste and outrage on Friday and hours later read for the first time at a reading sponsored by the Atrocious Poets at the Old Court House Arts Center on the Square in Woodstock, Illinois.  It was the most enthusiastically received of the four poems I performed.

The Turds Will Rise from the Shitholes
January 12, 2018

The turds will rise from the shitholes,
one by one, thousands, millions,
climb through oppressions that gave them birth
and ooze through the night
to a certain gilded bed
where they will suffocate a bigot.

And they will laugh.

We are the turds and decedents of turds
from every shithole in the world.

Did you think we came for the climate and cuisine,
for a pleasant change of scenery
and satin sheets on our beds?