75 Years Ago—Biggest Undertaking in the History of the World 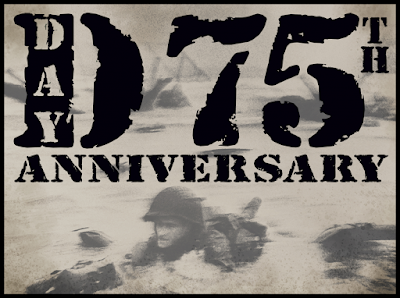 Note:  A lesson that bears repeating.  Even the cloddish vanity of Donald Trump can’t mar this anniversary.
When it comes to World War II, certain dates are etched indelibly into the American consciousness, even occasionally piercing the historical unawareness of young people now generations removed from the events.  December 7, Pearl Harbor Day is one.  August 6 when the U.S. dropped the first Atomic Bomb making the end of the war with Japan inevitable is another.

Nearly 2 million soldiers, sailors, and airmen were involved in the total Operation Overlord, including those landed after the first day.  195,000 Naval personnel manned 6,039 vessels including 1,200 warships and 15 hospital ships.  The United States alone shipped 7 million tons of supplies, 14 billion pounds of material including 448,000 tons of ammunition.
Air operations in support of D-Day, which began in April, included 14,000 missions with a loss of 2000 air craft and 12,000 airmen before the landing.  127 planes were lost on D-Day alone.

Posted by Patrick Murfin at 5:50 AM