Note—Long time readers of this little blog are probably familiar with and thoroughly sick of my regular feigned despair at being passed over for being named U.S. Poet Laureate  In fact there are probably a thousand or more American versifiers more accomplished, deserving, and distinguished not to mention prolific, widely published, and honored.  And in recent years the sages who make the selection have made a point of seeking a wide range of voices often representing ignored or marginalized communities.  I can’t pretend to have any argument over this year’s selection.

On Wednesday Carla Hayden, the Librarian of the Congress announced the selection of a new Poet Laureate Consultant in Poetry to succeed Tracy K. Smith. Native American scribe.  Hayden noted:
Joy Harjo has championed the art of poetry – ‘soul talk’ as she calls it – for over four decades,” Hayden said. “To her, poems are ‘carriers of dreams, knowledge and wisdom,’ and through them she tells an American story of tradition and loss, reckoning and myth-making. Her work powerfully connects us to the earth and the spiritual world with direct, inventive lyricism that helps us reimagine who we are.
Multi-talented Harjo has also studied art; mastered the saxophone at age 40 becoming a recording artist; penned juvenile fiction, memoirs, and plays; and has had a distinguished academic career.  But her path to our nation’s greatest achievement for a poet has been anything but smooth and straight.
Harjo was born on May 9, 1951 as Joy Foster. Her father Allen W. Foster was Muscogee—Creek—and her mother Wynema Baker Foster, had mixed ancestry—Cherokee, French, and Irish.  She was the oldest of four children. Her parents divorced due to her father’s drinking and emotional and physical abusive behavior when drunk. Her mother's second marriage was to a man who disliked Indians was equally abusive.  The trauma rendered her nearly mute and she struggled in school.
In her teen years she found comfort, solace, and expression in art but her stepfather kicked her out of the family home when she was only 16.  Drifting in an out of the marginal lifestyle of an impoverished Native woman Joy found her way to Santa Fe, New Mexico, and enrolled in the Institute of American Indian Arts.
At age 19 she officially enrolled as a member of the Muscogee Nation and took her paternal grandmother’s last name Harjo, a common name among Muscogee and related peoples.
In Santa Fe Harjo met and married a fellow IAIA student, Phil Wilmon.  They had a son, Phil Dayn before the youthful marriage ended in divorce.
Harjo moved on to the University of New Mexico, enrolling as a pre-med student but changing her major to art and then creative writing, as she was inspired by Native American writers.  There she met Simon Ortiz of the Acoma Pueblo at poetry readings.  The established poet became her mentor and eventually her lover and together they had a daughter, Rainy Dawn.
She graduated in 1976 already noted as a promising and then earned her Master of Fine Arts in creative writing from the prestigious University of Iowa.
Harjo returned to the IAIA to teach in 1978 and ‘79 and again in ‘83 and ‘84. She has also taught at Arizona State University from, the University of Colorado from 1985 to 1988, the University of Arizona from 1988 to 1990, the University of New Mexico from 1991 to 1995, American Indian Studies Program at the University of Illinois at Urbana-Champaign in 2013, and was appointed to the Chair of Excellence in the Department of English at the University of Tennessee, Knoxville in 2016.
During her final years of study and through her academic career, Harjo published poetry and stories to growing acclaim beginning with The Last Song in 1975 and including She Had Some Horses in 1983, Secrets from the Center of the World in 1989, The Woman Who Fell From the Sky in 1994, A Map to the Next World in 2000, 1, How We Became Human New and Selected Poems: 1975–2001in 2004, Conflict Resolution for Holy Beings: Poems in 2015, and An American Sunrise: Poems this year.
Along the way Harjo reaped a slew of awards, recognition, and fellowships including a listing in the Outstanding Young Women in America and a National Endowment for the Arts Creative Writing Fellowship in 1978; the Arizona Commission on the Arts Poetry Fellowship in 1989; the American Indian Distinguished Achievement in the Arts Award in 1990; the William Carlos Williams Award from the Poetry Society of America and the American Book Award from the Before Columbus Foundation for In Mad Love and War in 1991; the Woodrow Wilson Fellowship at Green Mountain College in Poultney, Vermont in 1993; the Lifetime Achievement Award from the Native Writers Circle of The Americas in 1995; the New Mexico Governor’s Award for Excellence in the Arts in 1997; the Oklahoma Book Award for Poetry for How We Became Human in 2003; the Eagle Spirit Achievement Award in 2009; the John Simon Guggenheim Memorial Foundation Fellowship in 2014; the Wallace Stevens Award in Poetry by the Academy of American Poets Board of Chancellors in 2015; and the Ruth Lilly Poetry Prize from the Poetry Foundation in 2017.  This list is neither complete nor exhaustive.
If all of this seems like a smooth, steady climb to success and recognition, it was not. Harjo’s personal life was often chaotic.  She was wracked with self-doubt and restless both creatively and spiritually in addition to her poetry she continued to draw and create works of visual art that she often incorporated in readings and performances.


At the age of 40 after hearing recordings of John Coltrane Harjo picked up the saxophone.  She brought that free form jazz spirit to music based on Native American traditions, lore, and rhythms.  She also sang.  Her five albums each received honors and in 2009 she won the Native American Music Award for best female artist. She frequently tours with her music group, the Arrow Dynamics and incorporates music into her readings in which she speaks with a musical tone, creating a song in every poem.
Harjo has also used her poetry and creative spirit in social justice activism not only around Native American issues but women’s rights and equal justice in today’s hostile environment.  Her web site includes insightful commentary on the issues in her blog.  Her activism for Native American rights and feminism stems from her belief in unity and the lack of separation among human, animal, plant, sky, and earth. Harjo believes that we become most human when we understand the connection among all living things—what Unitarian Universalists like to call the interdependent web of all existence. She believes that colonialism led to Native American women being oppressed within their own communities, and she works to encourage more political equality between the sexes.
These beliefs spring especially from an ever deepening understanding of her Muscogee/Creek tradition but are not limited to it.  Due to her long time residency in the Southwest, many of her stories and poems are set there and reflect to stories of the Hopi and other tribes/nations of that region as well as the broader condition of native peoples throughout the Western Hemisphere.
Now to some samples of that work.
An America Sunrise is the title poem of her next collection which will be published later this year by her long-time publisher W.W. Norton reflects on and salutes a famous poem by Gwendolyn Brooks, who was herself an early Poet Laureate, We Real Cool.
An American Sunrise


We were running out of breath, as we ran out to meet ourselves. We


were surfacing the edge of our ancestors’ fights, and ready to strike.


It was difficult to lose days in the Indian bar if you were straight.


Easy if you played pool and drank to remember to forget. We


made plans to be professional — and did. And some of us could sing


so we drummed a fire-lit pathway up to those starry stars. Sin


was invented by the Christians, as was the Devil, we sang. We


were the heathens, but needed to be saved from them — thin


chance. We knew we were all related in this story, a little gin


will clarify the dark and make us all feel like dancing. We


had something to do with the origins of blues and jazz


I argued with a Pueblo as I filled the jukebox with dimes in June,


forty years later and we still want justice. We are still America. We


know the rumors of our demise. We spit them out. They die 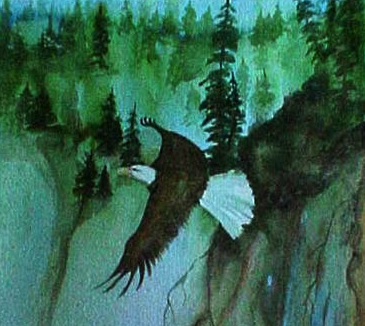 To pray you open your whole self


To one whole voice that is you.


And know there is more


Can’t know except in moments


Steadily growing, and in languages


That aren’t always sound but other


In wind, swept our hearts clean


We see you, see ourselves and know


That we must take the utmost care


And kindness in all things.


Breathe in, knowing we are made of


All this, and breathe, knowing


We are truly blessed because we


Were born, and die soon within a


We pray that it will be done 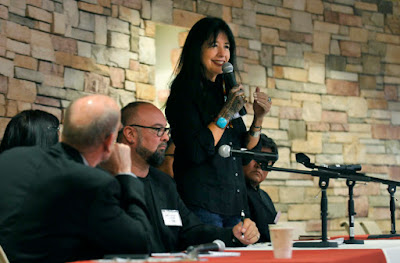 How to Write a Poem in Time of War


Shrapnel and the eye


Of a house, a row of houses. There’s a rat scrambling


From light with fleshy trash in its mouth. A baby strapped to its mother’s back


The river, the town, the village,


The bedroom, our kitchen. They eat everything.


Like mother and father tears swallowed for restless peace.


We used to see woodpeckers


The size of the sun, redbirds, and were greeted


By chickadees with their good morning songs.


We’d started to cook outside slippery with dew and laughter, ah those smoky sweet sunrises.


We tried to pretend war wasn’t going to happen.


Though they began building their houses all around us and demanding  more.


They started teaching our children their god’s story,


A story in which we’d always be slaves.


This is memory shredded because it is impossible to hold by words, even poetry.

These memories were left here with the trees:


The torn pocket of your daughter’s hand-sewn dress,


The sash, the lace.


The baby’s delicately beaded moccasin still connected to the foot,


A young man’s note of promise to his beloved —

No! This is not the best place to begin.

Everyone was asleep, despite the distant bombs. Terror had become the familiar stranger.


Our beloved twin girls curled up in their nightgowns, next to their father and me.

If we begin here, none of us will make it to the end
Of the poem.

Someone has to make it out alive, sang a grandfather to his grandson,


His granddaughter, as he blew his most powerful song into the hearts of the children.


There it would be hidden from the soldiers,


Who would take them miles, rivers, mountains from the navel cord place


Of the origin story.


He knew one day, far day, the grandchildren would return,  generations later


Through walls of laws meant to hamper or destroy, over the  libraries of


The ancestors in the winds, born in stones.


His song brings us to his home place in these smoky hills.