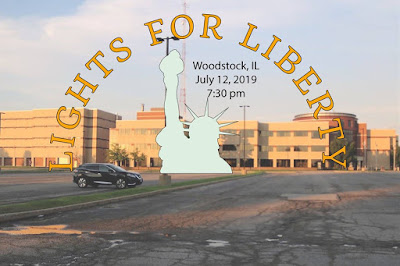 The McHenry County Jail which rents space to Federal detention, will be the focus in the Chicago area and Northern Illinois for a Lights for Liberty Vigil to End Human Detention Camps on Friday July 12 from 7:30 to 9 pm.  It will be one scores protest vigils at detention camps on the border and other detention centers nationwide.
Light for Liberty describes itself as:
A coalition of people, many of whom are mothers, dedicated to human rights, and the fundamental principle behind democracy that all human beings have a right to life, liberty and dignity. We are partnering with international, national, regional and local communities and organizations who believe that these fundamental rights are not negotiable and are willing to protect them. https://www.lightsforliberty.org/ 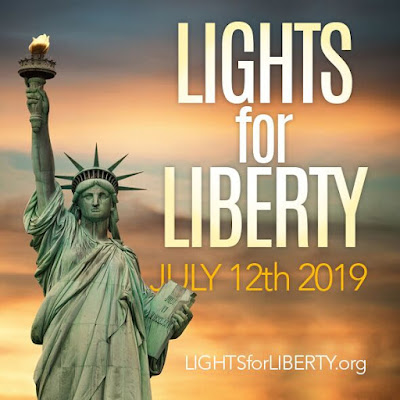 According to Patrick Murfin, a lead organizer of the Woodstock event and co-chair of the Tree of Life Unitarian Universalist Congregation Social Justice Team, there was a groundswell of interest in the event especially “after disclosures of shocking conditions and abuse in holding facilities for children at the border and President Trump’s threat of massive round-up raids on  families across the country which has terrified whole communities.
“We will callout immigrant detentions camps for the shame of  what they really are—American concentration camps.”
The event will be held on the grassy area across from the jail along Route 47 in Woodstock between Ware Road and Russel Court.  Parking will be available in the Northwood Junior High School lot across Rt. 47.  A rally will begin at 7:30 featuring speakers from the Latino community, immigrant justice advocates, religious leaders, legal support groups, and personal witnesses.  A list of speakers will soon be forthcoming.
At 9 pm the candle light vigil will begin, coordinating with other actions across the country.  Participants are urged to bring friends, signs, candles.
The event has been planned by concerned local residents and is officially co-sponsored by Indivisible Illinois and the Tree of Life UU Congregation Social Justice Team.  Several other co-sponsors are expected.
As a regional action the rally and vigil is expected to be the biggest yet held at the Jail or in support of immigration justice.
For more information visit the FacebookEvent, e-mail pmurfin@sbcglobal.net, or call 815 814-5645.

Posted by Patrick Murfin at 2:51 PM