All in for the Global Climate Strike Today

Millions of folks from around the world will turn out today for massive actions sparked by the literal life and death crisis of the environment and largely led by students and young people who realize their future has been threatened stupidity and greed.  They are done being polite and will no longer stand to be patted on the head and told how cute or inspiring their actions are.  A lot of people agree with them now and this pointedly intergenerational Climate Strike is being joined by scientists, labor unions, indigenous peoples, and even some politicians, governments, and business groups most threatened.
Headline grabbing events have lent even more urgency to the call.  The Bahamas lie in ruins from an almost unprecedentedly powerful hurricane as of now seven potential hurricanes are lined up across the Atlantic  each fed and strengthened by warming waters and disrupted currents including the Gulf Stream.  A mere slow moving tropical depression is right now dumping up to 40 inches of rain on South Texas—the kind of monsoon long familiar in South Asia which now threaten to become regular events here, too.  The polar North is losing its sea ice and glaciers from Greenland and Iceland to Alaska are disappearing and raising sea levels.  Those threats have been mirrored in the Antarctic.  Fires continue to rage across the globe eating up crucial carbon sinks that can temper rising temperatures.  Australia is headed into its summer season expecting another year of record breaking heat and drought so severe that swaths of the country may become uninhabitable. 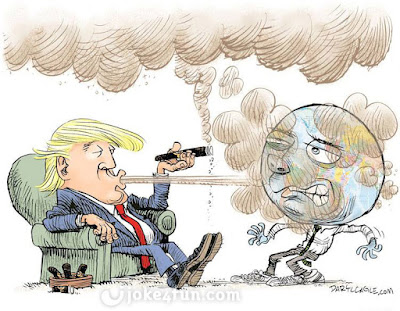 Yet, predictably, there is pushback officially led with zeal by the United States Government under the science denying Trump regime.  Not only has the U.S. withdrawn from international climate pacts and flouted reversal of virtually every American environmental regulation it can lay its hands on.  It does not just deny credible science; it actively suppresses and censors research.  Trade negotiations and even continued support to long-time allies are used to blackmail other nations.
The climate strike is already well underway.  In Australia, which gets a head start, more than 300,000 have taken to the streets already in Sydney, Melbourne, Perth, other major cities and rural communities.  The strike is supported not only by students, but is endorsed by most major trade unions many of whose members are taking the day off.
In the United Kingdom, where the student-led Extinction Rebellion is a well-established force, trade unions have called for the first national General Strike since 1926.  Boris Johnson’s battered Tory government, already disintegrating under his Brexit clean break debacle, is in big trouble.
Every participating country has its own story, its own heroes.  Some, like New Zealand, plan their Strikes for a week from today, September 27, the anniversary of the publication of Silent Spring, a foundational ecological document in 1962.  Other countries are planning strikes and marches on both days in a one-two punch.

In the U.S. the largest Climate Strike action is expected in New York City, where the United Nations is hosting an emergency climate summit.   Greta Thunberg, the sixteen-year-old Norwegian school girl who inspired the international student climate strike movement with her solitary Friday strike in Oslo and is now the movement’s most visible symbol will be on hand supported by US Youth Climate Strike, 350.org, MoveOn, Amnesty International, Extinction Rebellion, Greenpeace International, Oxfam, World Wildlife Fund, Indivisible, the March for Science, Women’s March, Service Employees International Union (SEIU), Labor Network for Sustainability, Green Faith, the Unitarian Universalist Association (UUA), the Unitarian Universalist Service Committee (UUSC) and dozens of others.  New York Public Schools have announced that participation by its students will be considered an excused absence.  A million or more are expected to take to the streets in New York alone.
Other major U.S. actions are scheduled today in Boston, Washington D.C., Philadelphia, Chicago, Los Angeles, San Francisco, Portland, and Seattle. They will be supported by hundreds of local actions.
The Chicago Youth Climate Strike will start at South Columbus Drive and East Roosevelt Road in the south end of Grant Park near the Field Museum at 11am and march to Federal Plaza, South Dearborn and Adams, for a rally featuring performers and speakers.
I have been promoting the Climate Strike on this blog and in social media for some time and was eagerly planning to take the train down to Chicago to participate.  Alas the other day while looking at the march route I came to an unfortunate but irrefutable conclusion.  I am simply no longer physically able to make such a march, to be on my feet for so many hours, and to be largely unable to have access to toilets.  Since my major illness last year, even relatively moderate exercise leaves me short of breath and weak.  It is a bitter pill for a guy who used to walk miles regularly and who is an old fire horse ready to respond to any call for action.  In fact, the realization leaves me feeling heart broken and useless.
It must have been weighing heavily on my mind because I woke with a start last night.  I suddenly realized that if Greta Thunberg could start this whole ball rolling with her personal lonely vigil, there is no reason why I can’t conduct my own climate strike right here where I live.

I took a marker to some poster board, and made a sloppy sign.  While the March is on in Chicago, I will stand at the end of my driveway on busy Illinois Rt. 176 in Crystal Lake and bear my own witness.  Maybe I will call the Northwest Herald and tip them off to the action of a crazy old man in a cowboy hat.  Maybe they will cover it. Maybe they won’t.  I’ll be there either way.  Honk if you drive by.
I invite others like me to do the same.  If your house is not on as busy a street as mine, amble over to some nearby intersection and pass a couple of pleasant hours.  Someone is bound to see you.
Meanwhile I am so glad young people are taking up where we geezers are leaving off.  After all, the future belongs to you!
Posted by Patrick Murfin at 8:16 AM