The Frenchman in the Boater Hat 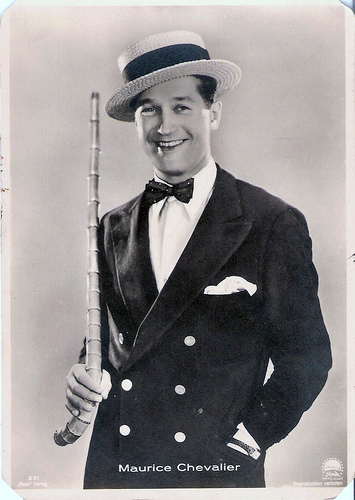 Maurice Chevalier, despite the aristocratic connotations of his last name, made in inauspicious bow in Paris on September 12, 1888, the son of a house painter, considered a low trade, and a Franco-Belgian beauty.  He grew up little more than a street urchin with little formal schooling.
By 1901, as the age of 13 he was singing for tips in a café which eventually led to small parts in theatrical productions.  But through his teens he supported himself mostly with a parade of jobs—carpenter’s apprentice, electrician, printer, and doll painter.
In the first a series of relationships with important women, the handsome young man attracted the attention of Fréhel, a leading star of the Paris stage in 1909.  Like him she had come from the Paris streets to fame as a music hall performer.  Their relationship was tempestuous, due in no small part to her serious alcoholism, but during their brief affair she used her influence to get Chevalier a star shot as a singer and mimic at l’Alcazar in Marseille.
Sensational notices in the south brought him back to Paris where he was soon staring in the Folies Bergère.   In 1911 he abruptly cut off his relationship with Fréhel, causing her to attempt suicide.  He took up with his dance partner and a major star of the Folies, 36-year-old Mistinguett.  They had a very public love affair and she advanced his career—and as we shall see, may have saved his life.

After success on the stage and as a recording artist—and less success in a few silent films, Chevalier was called into national service shortly before World War I broke out in 1914.  Stationed at the front from the beginning of serious hostilities, he was severely wounded in the back by shrapnel and was captured by the Germans and held as a prisoner of war.  While there he undertook the study of English from British P.O.W.s and became quite fluent.
In 1916 Mistinguett prevailed upon her admirer—and probable lover—King Alfonso XIII of Spain, to intercede with his cousin Kaiser Wilhelm II to release Chevalier.  And in good time, too, because conditions in the camps deteriorated badly as the war dragged on and many died there.
Back in Paris Mistinguett secured him a spot in her current show at the prestigious Casino de Paris in 1917.  By this time he had perfected his wry but suave stage persona with a straw boater hat tilted rakishly over one eye.  His star turn at the casino attracted big audiences not only among Parisians, but among the huge numbers of British and American troops flooding the city.  Although he sang in French, he was able to banter charmingly in English, which opened up new possibilities.
He was booked in London where he had huge success at the Palace Theatre.  While in England, he was exposed for the first time to American jazz, just introduced there by the Original Dixieland Jass Band, which deeply influenced his own singing style, something that deepened as Black musicians began performing in Paris soon after.
Back in Paris, Chevalier impressed visiting American screen idle Douglas Fairbanks in 1920 who tried to sign him for Four Stars Pictures to work opposite his wife, Mary Pickford.  But Chevalier, who’s French films had not been successful, did not believe he was suitable for silent film.
In 1920 he appeared—and nearly stole the show—as the second lead in the operetta Dédé.  When the show was picked up for Broadway, Chevalier was able to make his American debut in 1922, which he followed up with successful appearances in revues.  He was creating many of his memorable song and dance performances, including such signature hits as Valentine.
The advent of talking pictures in 1928 proved to be Chevalier’s breakthrough in film.  Paramount Pictures, eager to catch up with first-out-of-the-gate Warner Bros., looked for established musical stars.  The handsome Frenchman fit the bill perfectly.  Arriving in Hollywood with a new wife, dancer Yvonne Vallée, he went to work.

Paramount released its first musical, Innocents of Paris staring Chevalier in 1929.  Like most early musicals, encumbered by a camera that had to be kept in a sealed room because of its own noise, the film was somewhat flat and static.  But Chevalier was sensational in his performance of the instant classic Louise.
In 1929 he appeared in for the first time with Jeanette McDonald in The Love Parade despite the fact that the insecure star was convinced he could not portray of a member of a royal court.  In fact the hit saved the studio which was on the brink of collapse after the Stock Market Crash, and earned Chevalier an Academy Award nomination for Best Actor.

By the following year he was the biggest star on the Paramount lot and some say the highest paid actor in films.  The Big Pond that year teamed him with Claudette Colbert in a light romantic comedy which featured hit songs, Livin’ in the Sunlight, Lovin’ in the Moonlight and A New Kind of Love, often called the Nightingale Song.  Chevalier received another Oscar nomination for the part.  He was also part of an all-star revue film, Paramount on Parade.
These films, and ones to follow, were simultaneously shot in French for release in Europe
An illustration of just how iconic Chevalier had become in a short time, was a scene in the Marx Brothers classic Monkey Business in 1931.  Harpo, Chico, and Groucho, stowaways on an ocean liner, each try to sneak past immigration with Chevaliers’ stolen passport, each trying to prove he is the star by performing a famous snatch of A New Kind of Love—“If the nightingales could sing like you….”
Despite his success, his humble and impoverished origins caused some quirky behavior.  He was notoriously cheap, refusing to pay a dime a day parking fee on the Paramount lot.  When offered the customary cigarette, a polite custom of the time, he would take two or three and stuff them in his pocket.  He was also a poor tipper on his rounds of nightclubs with young dancers and actresses.  Despite his marriage, he was notoriously on the prowl.  Chevalier was very insecure about his humble origins and lack of a good education.  He relied on fellow French stars Charles Boyer and Adolph Menjou, both well-bred men of sophisticated taste, for tips on art, literature, and culture.
Musicals had briefly gone out of fashion in 1931 when the studio re-united Chevalier with Colbert and with Miriam Hopkins in The Smiling Lieutenant.  It was his third hit film for director Ernst Lubitsch and Paramount’s biggest grossing picture of the year.

He was then reteamed with rising star McDonald in three more huge hit musicals, One Hour With You, Love Me Tonight, and Franz Lehár operetta The Merry Widow.  In the second of those films, songwriters Richard Rodgers and Lorenz Hart for the first time integrated the music to advance the plot.
Despite these successes, Chevalier got into a salary dispute with Paramount bosses and bolted the studio for rival MGM in 1935.  But MGM did not seem interested him for American releases.  Instead he was sent back to France to make films in French for the European market.  In 1936 working again with McDonald he made La veuve joyeuse with Lubitsch directing.
They loaned him to Columbia Pictures for Folies Bergère de Paris with Merle Oberon and Ann Sothern, produced in English and French Versions—the French version including the famous topless dancers of the revue.
Chevalier’s star power in Hollywood was fading, but still strong in Europe.  In ’37 he starred in a British release, The Beloved Vagabond.  He continued to make films in France for the rest of the decade, some of which were in limited release in the US in English versions, but none were successful.  The same year he married in Paris for a second time to another dancer, Nita Raya.
None the less Chevalier remained a major star and returned with great success to the Paris stage.

His career, however, ominously collided with the outbreak of World War II, resulting in an almost fatal blow to his American reputation.  Chevalier stayed in Paris during the German occupation starring again at the Casino de Paris in the revue Bonjour Paris.  Just as American and British troops were a big part of his audience in 1917, Germans crowded his performances in 1940 and ’41.  He was invited—virtually ordered—to appear in Berlin, but he constantly declined.  He did get permission to entertain at the very same prisoner of war camp where he had once been held and, turning on his noted charm, managed to leave with 10 POWs released to his custody.
Despite this, Chevalier never used his popularity with German officers in Paris, who he saw socially, to mine for intelligence information like Collette and other famous figures or to become active in the Resistance like Josephine Baker.  He tried to remain neutral.  But that became more and more difficult and in 1942 he left Paris and performing for a period as a near recluse near Cannes.
After liberation, he joined in street celebrations in Paris, and also participated in some Communist street rallies.  He was charged with collaboration in 1944, which was widely publicized in the US.  Not widely publicized was that he was cleared of all charges.
With his ability to tour in the US and Britain damaged not only by the lingering suspicions of collaboration, but by McCarthy Era anti-communist hysteria, Chevalier spent several years working on his autobiography in hopes to clear his name.
Splitting from Ray in 1946, he also cultivated an interest in painting and the arts, always trying to climb out of his origins in the Paris gutter.
Just when the first ever official Friars Club Roast was held in his honor making it seem like he might regain ground in America, his appearance at the Stockholm Appeal concert, a Communist organized protest to nuclear arms in 1949 resulted in his visa to visit the US being revoked.
Despite continuing to tour elsewhere, Chevalier was considering retirement and bought a comfortable estate in Paris.  He began a long-time relationship with Janie Michels, a young divorcee with three children.
With McCarthyism fading, his visa was restored in 1954 and the next year Chevalier launched a successful US tour, mostly working in the most elegant nightclubs.  Revived interest in his career convinced screenwriter/director Billy Wilder to cast him as Audrey Hepburn’s father, a small but meaty dramatic role, in Love in the Afternoon.  The 1957 film was his first American production in 20 years.

It was followed by a hugely successful second film career as an elderly man, notably in Gigi, 1958 with Leslie Caron.  The Motion Picture Academy presented him with an Honorary Oscar in recognition of his whole film career as a result.
Chevalier also appeared in Can-Can with Frank Sinatra, the romantic drama Fanny with Caron and his old Hollywood friend Charles Boyer, Panic Button with Jayne Mansfield and three other U.S films.  In between he toured tireless in the US, Latin America, and Europe.
But he was slowing down.  After a farewell American tour in 1969, he retired.  Disney songwriters Richard M. and Robert B. Sherman lured him into the studio one more time to record the theme for The Aristocats, his final contribution to the film industry.
Chevalier died in Paris on January 1, 1972 at the age of 83.
Posted by Patrick Murfin at 2:00 AM