First Colonial Newspaper Quashed as Soon as it Appeared

Back in the days when I was in school one of the little factoids that I learned that stuck with me was that the first newspaper in the Colonies was Publick Occurrences Both Forreign and Domestick which was issued on September 25, 1690 in Boston.

What I was not told in school was that within days of first appearing and before any second addition could be printed, it was suppressed by the Governor and Council of the Massachusetts Bay Colony.

It was also, depending how you define it, not really the first newspaper.  Single page broadsides containing local news and reports picked up from merchant ships about affairs in the Motherland and in Europe, were sporadically printed earlier.  What differentiated this effort, which was printed by Richard Pierce and edited by Benjamin Harris, was that it contained multiple pages and was meant to be issued regularly—monthly “or, if any Glut of Occurrences happen, oftener.”—under  the same title.
The paper had four six by ten inch pages.  Editor Harris could, however, only find enough news for to fill three of them.  Perhaps the need to pad the paper is what got it in trouble.  In addition to local gossip, like the grieving widower who hung himself, epidemics of “fevers and agues” as well as small pox, and a fire that had consumed much of the city, the big news of the day was the war with the French—King Williams War—and attempts by colonial forces and their native allies to invade Canada.

Harris had to rely on word gathered from travelers and rumor, including reports that native allies of the colonists had abused French soldiers taken prisoner.  The editor was outraged and suggested that colonial forces should abandon the use of native allies—“if Almighty God will have Canada ſubdu’d without the aſſiſtance of thoſe miſerable Salvages.”
Since it was virtually impossible for a European army to effectively fight in the wilderness without native auxiliaries, this report undoubtedly irked authorities.
There were several other reports of skirmishes, ships taken and the like gleaned from visiting ships.  And big news of a victory by William of Orange in Ireland.  To this report was amended a juicy bit of gossip—that the son of the King of France might ally himself with the Huguenots and rise against his father because “the Father used to lie with the Son’s Wife.”
That bit of scandal was too shocking for authorities.  Just four days after the journal hit the streets, on September 29, the Council issued the following order:
Whereas some have lately presumed to Print and Disperse a Pamphlet, Entitled, Publick Occurrences, both Forreign and Domestick: Boston, Thursday, and September 25th, 1690. Without the least Privity and Countenace of Authority. The Governour and Council having had the perusal of said Pamphlet, and finding that therein contained Reflections of a very high nature: As also sundry doubtful and uncertain Reports, do hereby manifest and declare their high Resentment and Disallowance of said Pamphlet, and Order that the same be Suppressed and called in; strickly forbidden any person or persons for the future to Set forth any thing in Print without License first obtained from those that are or shall be appointed by the Government to grant the same.
The paper became the first ever to be banned in Boston.
Some of my friends in Unitarian Universalist history circles are highly protective of the reputation of our Puritan forbearers.  They will tell you that the Puritans are misunderstood and misrepresented.  If you suggest that the Massachusetts Bay Colony at this late date—three generations from the founding in 1630—was still essentially a theocracy they will react as if you had laced their morning coffee with molten lead.
These historians will point out that the powerful clerics of the Standing Order had long since surrendered their role in civic administration of the colony, that voting and meetings of Towns were strictly separate from the Churches.  Church membership was no longer required for participation in government, although attendance at approved services was compulsory as was support of the Church through taxes.  But whether they held office or not, the clergy of Boston were the power behind any government.  Their relationship was much the same as the council of Mullahs on the Iranian government today.
I will go ahead and call that Theocracy and blame the first act of public censorship of the press squarely on the shoulder of the religious establishment. 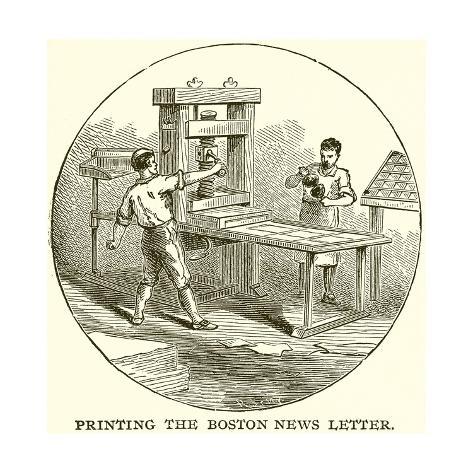 The action by the Council understandably deterred others from founding newspapers.  It took 14 years for a newspaper to finally be successfully established.  The Boston News-Letter, a single, double sided sheet, finally made its appearance on April 3, 1704.  It continued publishing under variations of the News-Letter name until February 1776.  Because of its Tory sympathies, it was suppressed when the British evacuated Boston and George Washington’s new Continental Army moved in.
Posted by Patrick Murfin at 8:07 AM