Everett McKinley Dirksen—When Republicans Were Not All Crooks and Madmen 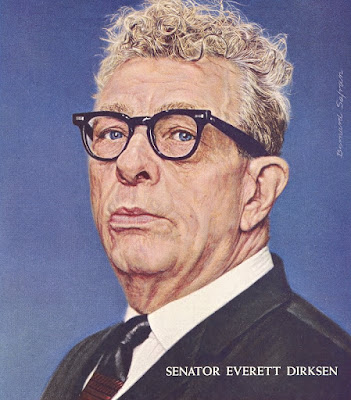 The maxim says “a dead fish rots from the head down.”  Case in point, Donald Trump, his cabinet and other appointees, the GOP in Congress—most noticeably Senate Majority Leader Mitch McConnell—and a slew of Red State governors.  Corruption, venality, bigotry leavened with incompetence and willful ignorance.  As many have noted it’s not your father’s Republican Party.  But…
Those of us of a certain age remember when Republicans were stodgy and conservative but generally not crooks, or madmen.  I never thought I would say that I miss those guys.
A good way to see just how far the modern Republican Party has gone off the rails is to review the career of Illinois Senator Everett McKinley Dirksen, a self-proclaimed party conservative who died fifty years ago today September 7, 1969 having served nearly 19 years in the Senate including 10 years as Minority Leader.
Dirksen and his fraternal twin brother were born on his parent’s farm near downstate Pekin, Illinois on January 4, 1896.  His parents were both German immigrants and his father, like most Midwestern Germans, was a staunch Republican.  He named his son in honor the legendary orator Edward Everett and President William McKinley.
The boy was educated in local schools and attended the University of Minnesota Law School before dropping out to enlist in the Army during World War I.  He served in France as a second lieutenant of artillery.
After the war he returned to Pekin and took up private business.  His political career began with election to the city council in 1927.  He had his eye on bigger things.  He failed to win the GOP nomination for the House of Representatives in 1930, but won both nomination and election in 1932.
Dirksen entered Congress as a minority Republican in the Democratic landslide that brought Franklin D. Roosevelt to the White House.  Despite the ingrained conservatism of a small town businessman, Dirksen recognized the severity of the national emergency of the Great Depression and supported much, but not all, of F.D.R.’s New Deal legislation despite pressure from party leaders.  It marked a willingness to work across party lines that was the hallmark of his long career.
Roosevelt, however, could not rely on the Illinois Congressman for support as he steered the country to support of the Allies in World War II.  Dirksen was an ardent isolationist in the mold of one of his most influential political supporters, Col. Robert R. McCormack, publisher of the Chicago Tribune.  He showed his considerable skill as a legislative tactician during the debate over Roosevelt’s Lend Lease Act.  He recognized that there were not enough Republican votes to stop passage in the House, but took advantage of sixty-five Democrats leaving the floor for lunch to successfully attach an amendment that gave the Senate and House to power to revoke the President’s authority by a concurring resolution that could be passed by a simple majority in both houses.
Dirksen made an abortive bid for the 1944 Republican Presidential nomination, which observers believed was mostly an attempt to derail the re-nomination of liberal Wendell Willkie or a ploy to get the Vice Presidential nomination.  In any event on the eve of the convention he signaled that he would not be a contender and although he allowed himself to be nominated as a favorite son of Illinois, did not get a single vote.
In 1948, citing an eye ailment that would plague him the rest of his life, Dirksen announced that he would not seek re-election.  He was evidently feeling better in 1950 when he beat incumbent Senator Scott Lucas, the sitting Majority Leader and a key ally of President Harry Truman.  Dirksen campaigned with the help of Wisconsin Senator Joseph McCarthy who accused Lucas of being soft on Communism.
Dirksen remained loyal to McCarthy, but tried to convince him to admit to “misstatements” and apologize to avoid censure by the Senate.  When the vote came down, he supported McCarthy while privately acknowledging that his friend had, “lost his senses.”
Even as a freshman Dirksen quickly became a power in the Senate where he was known for his 19th Century style florid oratory, deceptively folksy demeanor, and considerable skill at building legislative coalitions.  By 1952 he was well enough thought of to be the voice of Mid-Western conservatives at the Republican National Convention in support of Senator Robert Taft of Ohio and against Dwight Eisenhower.  In a blistering speech to the convention he went directly after Eisenhower’s biggest supporter, former two time nominee Thomas E. Dewey.  Pointing at Dewey on the floor he thundered, “Don’t take us down the path to defeat again!” to a mixed chorus of boos and cheers.

Dirksen, however, dutifully supported Eisenhower that fall and soon became his most reliable ally in the Senate, a tribute to the practicality of both men.
When the Senate reorganized in 1959, Dirksen was elected Minority Leader over more liberal John Sherman Cooper of Kentucky, but he moved quickly to heal rifts between wings of the party and molded a solid caucus.  As John F. Kennedy came to the Presidency, he became the face of the Republican Party, along with House Minority Leader Charles Halleck of Indiana.   Their weekly joint news conference, dubbed the Ev and Charley Show, became goldmine of television sound bites, usually featuring Dirksen’s folksy wit.  His weathered face, mop of unruly curls, and distinctive voice made him a regular on Meet the Press and Face the Nation.

Dirksen became famous for his quips such as, “A billion here, a billion there, pretty soon, you’re talking real money,” when talking about the budget and his story of two Quaker ladies discussing taxes, “Don’t tax me, don’t tax thee, tax the fellow behind the tree.”
Although a moderate conservative on economic policy and an anti-Communist hawk in foreign affairs, Dirksen, in the tradition of Illinois Republicans, was passionate about civil rights.  Working across the aisle with Democratic Majority Leader Mike Mansfield of Montana, he was critical in rounding up Republican votes to break filibusters against both the Civil Rights Act of 1963 and the Open Housing Act of 1968.

Reversing his traditional isolationism, Dirksen became an early supporter of the War in Vietnam.  His advice to his old Senate friend Lyndon B. Johnson was said to be critical to Johnson’s decision not only to continue Kennedy’s commitment of troops there, but to dramatically escalate the war against his own nagging doubts.

Dirksen recorded several spoken word albums.  A single from one of them, The Gallant Men, became an unexpected radio hit and earned him a Grammy.
The Senator was also famous for his passion for the common marigold and his frequent attempts to have the hardy plant name the national flower.  He waxed eloquent about the topic at a drop of a hat.

Dirksen died of complications following surgery for lung cancer at Walter Reed Army Hospital at the age of 77.  He was so well thought of by his Senate colleagues that they re-named the main Senate office building in his honor.  The new 1972 Federal Court Building in Chicago was also named for him.  His portrait hangs in honor in the Illinois State Capitol and a bronze statue stands on the lawn.
Posted by Patrick Murfin at 7:13 AM