Watching Ken Burns’ epic six part documentary Country Music over the last two weeks was a god damn religious experience for me.  Except for a couple of brief periods I was never a guy whose ear was glued to country radio and bought over the decades maybe a couple of dozen flat-out country records.  But I realized, sometimes through tears, that the music from the beginning to the end was in my bones and soul.
Some of it I came to from just growing up in Cheyenne listening to the acts that came in for Frontier Days like Roy Acuff, Red Foley, Patsy Montana, and the Sons of the Pioneers and taking in the old two reel westerns on TV.  We sang traditional Appalachian ballads and folk song in grade school out of Carl Sandburg’s American Song Book. 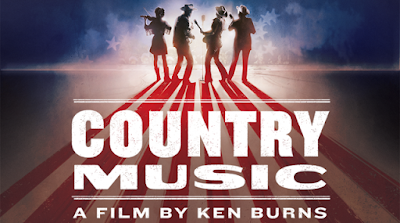 Some of it I absorbed as folk music fan.  I came to a lot of it sideways from cross-over radio hits, to cross fertilization with icons like Woody Guthrie, Bob Dylan, The Byrds, and Emmy Lou Harris.  I actually got to see Jethro Burns, Earl Scruggs, Doc Watson, and Vassar Clemens at Chicago folk clubs.   Porter Wagoner introduced me to Dolly Parsons while I was sitting in Sandstone prison for my draft rap.  TV also brought the Glen Campbell Good Time Hour, Barbara Mandrell and the Mandrell Sisters, Austin City Limits, and above all the Johnny Cash Show—my god Johnny Cash!
They all touched me—The Carter Family, Jimmie Rodgers, Gene Autry and the other singing cowboys, Roy Acuff, Bob Wills and the Texas Playboys, Bill Monroe and the Bluegrass Boys, of course Hank Williams, Patsy Cline, Loretta Lynn, Johnny Cash, George Jones, Tammy Wynette, Willie Nelson, Merle Haggard, Dolly Parton, the Outlaws, Kris Kristofferson,  Guy Clark, Graham Parsons, Emmy Lou Harris, Towns Van Zandt, Rosanne Cash, my daughters’ beloved Garth Brooks, down to contemporary artists just flashed by including The Dixie Chicks, Alison Krauss, and even—some of my readers will want to shoot me for this—Taylor Swift.
But even Ken Burns had to leave something out with barely a passing mention—before the Carter Family or Jimmy Rogers there was an unlikely singer recording major hits in what indisputably belongs in the country music pantheon.
There seems to be something about a train wreck that inspires a song.  Just about everybody knows Casey Jones.  Just two years after the disaster that inspired that tune, the Southern Railroad express known as the Fast Mail came barreling down a steep grade at a high rate of speed and overshot a tight radius turn right before a trestle sending the engine and train to a spectacular fiery crash at the bottom of a steep ravine.
Within 24 hours a witness/rescuer at the scene had penned a ballad set to the melody of a popular fiddle tune, The Ship That Never Returned, the same tune used latter for Charley on the MTA.  Just who that person was later became a matter of great controversy and an epic lawsuit.
The Fast Mail, designated as No. 97, ran on contract with the Post Office for service from Washington, DC to New Orleans via Atlanta.  That made it one of the highest volume mail trains in the South.  To encourage on time performance the contract included penalties for each minute the train arrived behind schedule at several stops along the route, including Spencer, North Carolina.  Railroad officials regularly pressured train crews to make up lost time to avoid the penalties.  As a result engineers often operated trains well above designated speeds.
The need for speed had contributed to a fatal accident in April of 1903 when the engine smashed into a boulder on the tracks near Lexington, North Carolina derailing the train and killing the engineer and Fireman.

On September 27 that same year a brand new Baldwin ten wheel 6-5-0 engine, #1102 which had been delivered just a week earlier was hooked up to No. 97.  For some reason, the train was already running behind schedule when it left Washington.  It rolled into Monroe, Virginia, a division point where train crews were changed, a full hour late.  The new engineer, 33 year old Joseph A. Broady, known to his friends and crew as Steve Broady, was handed orders to make up the time before the next Post Office penalty point at Spencer.  He was told to skip one regular junction stop entirely.  Although not explicitly ordered to go over the average 35 miles per hour limit between Monroe and Spencer, his bosses knew that he would have to exceed that.
Besides Broady the crew included Fireman A.C. Clapp, and apprentice Fireman John Hodge, Conductor John Blair, and Flagman James Robert Moody.  Also on board were Express Messenger W. R. Pinckney and 11 mail clerks.  Safe Locker Wentworth Armistead boarded the train at Lynchburg, Virginia making a total of 18 men on board.
The Mail clerks, express messenger and Armistead were all in the Post Office car attached directly behind the tender and ahead of the freight cars.
The scheduled running time for the 166 miles from Monroe to Spencer was four hours, fifteen minutes, an average speed of approximately 39 mph.  To make up the one hour delay, Broady would have to run at an average 51 mph over track known for its steep grades and tight curves.  Witnesses thought he was running at least 55 mph on the downgrade headed into the 45-foot high Stillhouse Trestle.  Broady applied his brakes but could not reduce his speed enough to make the sharp curve leading to the bridge.

The engine sailed off the track smashing to the bottom of the gorge next to the trestle.  Fire quickly spread and burned out of control completely consuming all of the wooden cars and almost all of the mail.  A crate of live canaries broke open in the crash and the birds escaped before the fire consumed the car.  Many lingered in the area and became an odd reminder of the crash.
Eleven men died in the crash, including all of the train crew.  The two Firemen were burned beyond recognition and it was impossible to determine which body was whose.  Most of the 7 survivors were injured but survived because they jumped from or were thrown from the wreck.  The distraught express messenger went home and immediately resigned.  Some of the surviving mail clerks did return to service, though none again on the Fast Mail.
Engine #1102 was salvaged, repaired, and put back in service.  It ran for 32 more years before the Southern scraped it in 1935.
The railroad, of course, placed all of the blame on the engineer, and even issued a report exaggerating his speed.  They never acknowledged any culpability for issuing the orders that made speeding inevitable.
The Fast Mail continued to run until 1907 when service was canceled in a re-alignment of mail contracts.
Among the many local residents who flocked to the scene of the accident to assist in rescue efforts was Fred Jackson Lewey who worked at a cotton mill near the base of the trestle and who was the cousin of Fireman Clapp.  He said he sat down and wrote lyrics the day after the wreck.  His friend Charles Noell contributed to the words and suggested the tune.  The Wreck of the Old 97 was widely played in the area and became a standard at barn dances across the South in the next 20 years.
The first recording was made for Victor talking Machine Co. by the nearly blind primitive fiddle player G.B. Grayson and his partner Henry Whitter who played guitar, harmonica, and sang.  Whitter also altered the lyrics.

Not long after that in 1924 Vernon Dalhart that sold more than seven million copies and his version became the bestselling non-holiday recording of the first 70 years of the industry.  It is the record that is usually cited for the birth of successful commercial country music.

Dahlart was born in 1883 and grew up on a Texas ranch where he cowboyed as a young man.  But he was trained as a classical singer at the Dallas Conservatory of Music.  After moving with his family to New York City and after performing in light opera like H.M.S Pinafore he was signed as a recording artist by Thomas Alva Edison.  From 1916 until 1923, he made over 400 recordings of light classical music and early dance band vocals for various record labels.  Eventually he sang on more than 5000 78 rpm singles for many labels, employing more than 100 pseudonyms.
But his by-chance recording of The Wreck of the Old ’97 for  Victor using his own Texas accent which he admitted sounded “like a Negro” was an astonishing hit.  The record was the first Southern or hillbilly record to achieve national success.  Naturally Dalhart found more such songs to record.
Victor was eager to expand a new found market and the success of the record led directly to the famous Bristol, Tennessee sessions in 1927 which first recorded the Carter Family and Jimmie Rodgers.  The rest is history.
Success like that often brings people out of the woodwork claiming a piece of the pie.  In David G. George, 1927 a former brakeman, railroad telegrapher, and week-end musician claimed that he was on the scene for the rescue efforts and penned the original lyrics himself.  He sued Victor and won a judgment for past royalties from Victor $65,295.  The company appealed three times, losing each time until the case got to the Supreme Court, which overturned the judgment.
Today experts are divided between the conflicting claims but most side with Lewey and Noell.
The song has become a staple of country music, bluegrass, and the folk revival.  It has been covered scores, maybe hundreds of time by artists as diverse as Jimmie Rodgers, Woody Guthrie, Pete Seeger, Flatt and Scruggs, Charlie Louvin, The Seekers, Carolyn Hester, Hank Snow, Box Car Willie, Johnny Cash, Patrick Sky, and Nine Pound Hammer.

Posted by Patrick Murfin at 8:07 AM